Delve into vibrant Cairo, encounter ancient wonders from the Great Pyramids to Abu Simbel, and sail to the temples of the Nile on a 3-night cruise from Aswan to Luxor.

Delve into vibrant Cairo, encounter ancient wonders from the Great Pyramids to Abu Simbel, and sail to the temples of the Nile on a 3-night cruise from Aswan to Luxor.

I dreamed for so long of visiting Egypt. When I went with Smithsonian, it was everything I ever imagined. Literally a dream come true. Thank you for such a magical, wonderful experience!

The trip to Egypt is a chance of a lifetime. The sites are amazing. I always felt safe. Our tour director was wonderful…

I hadn’t realized the major role ancient Egypt played in world history. This trip was a fascinating - even magical - experience. 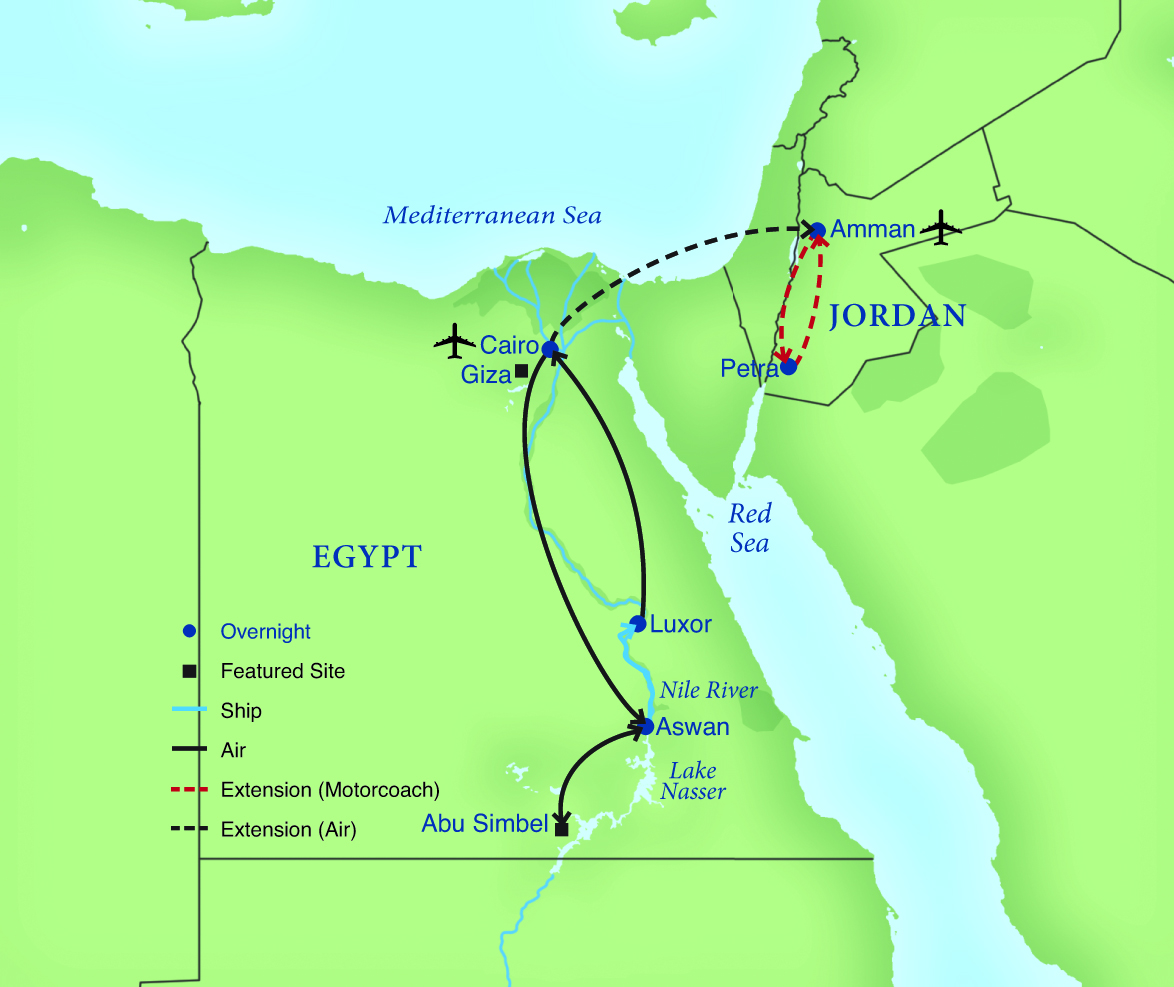 From intricately carved temples to the legendary pyramids, the wonders of ancient Egypt have astonished visitors for millennia. Venture into a world of pharaohs and gods, discovering temples and tombs adorned with elaborate hieroglyphs and colossal statues that have stood the test of time. Unravel the mysteries of Egypt as you explore Cairo, Giza, and Abu Simbel and sail the mighty Nile from Aswan to Luxor.

I dreamed for so long of visiting Egypt. When I went with Smithsonian, it was everything I ever imagined. Literally a dream come true. Thank you for such a magical, wonderful experience!

The trip to Egypt is a chance of a lifetime. The sites are amazing. I always felt safe. Our tour director was wonderful…

I hadn’t realized the major role ancient Egypt played in world history. This trip was a fascinating - even magical - experience.

Arrive in the Egyptian capital and transfer to your hotel.

After a morning briefing, your full-day tour begins at the Egyptian Museum, the renowned repository of Egyptian antiquities since the turn of the 20th century. Take in views over Cairo from the Citadel of Saladin and see the Alabaster Mosque of Mohamed Ali. Tonight gather for a welcome dinner at a local restaurant. (B,L,D)

Set out for Giza to encounter two of Egypt’s most iconic sites: the Pyramids and the Sphinx, whose leonine body and human face was carved from a single piece of limestone. Later, venture to Coptic Cairo to visit some of its beautiful churches, including the 5th-century St. Sergius Church, the famous Hanging Church, and the domed St. George's Church. End your tour at  The National Museum of Egyptian Civilization to see the collection of royal mummies that was moved here from the Egyptian Museum in April 2021. (B,L)

Very early this morning, fly to Aswan and connect with your flight to Abu Simbel. Here, on the west bank of Lake Nasser, visit the two massive rock temples guarded by statues of Ramses II and his wife Nefertari, featuring incredibly well-preserved murals within. Carved into a mountainside between B.C. 1264-1244, the temples were moved stone by stone to their current location in 1968; otherwise, they would have been flooded and submerged when the Aswan High Dam was built.

After touring this World Heritage site, return to the airport for the flight back to Aswan. Enjoy lunch at a local restaurant before checking in to your hotel. (B,L,D)

Visit the Aswan High Dam, considered a marvel of engineering when completed in 1965 to control Nile flooding. Then tour the temples of Philae, once a pilgrimage site for the cult of Isis and one of the most important temple complexes in ancient Nubia. Built between B.C. 380-362 on a small island in the Nile, Philae, like Abu Simbel, was relocated to save it from flooding; its current island site closely resembles the original. After lunch at a local restaurant, visit the Nubian Museum, an acclaimed showcase of Nubian art and architecture. Return to your hotel in the mid-afternoon and enjoy the remainder of the day at leisure. (B,L)

Start the day with a visit to the Unfinished Obelisk at the Aswan quarry.  Then board your ship in time for lunch. This afternoon, step into feluccas, replicas of ancient Nile sailboats, for a relaxing afternoon sail. Admire the Botanical Gardens on Kitchener’s Island, home of the British hero who commanded the forces in Sudan in 1897 in the Battle of Omdurman. See the massive granite rocks that inspired the name of Elephantine Island,  and the hilltop tomb of the Aga Khan. You’ll overnight in Aswan aboard the ship. (B,L,D)

Set sail down the Nile, stopping to explore two important temples of the Ptolemaic Kingdom. Go ashore at the ancient trading town of Kom Ombo. Explore its unusual double temple, dedicated to both Horus and the crocodile god Sobek. From here, admire stunning Nile views. Then sail on to Edfu, where tonight you are invited to a shipboard celebration. (B,L,D)

Cruise north, watching scenes of everyday life along the banks of the Nile. Arrive in Luxor, often called the world’s “greatest open-air museum.” Here, vast temple complexes, tombs, and statues dating from B.C. 2755 represent the pinnacle of Egyptian architecture. Get a close-up look at the antiquities found in the region at the Luxor Museum. Return to the ship for dinner and a belly-dancing performance. (B,L,D)

Disembark your ship late in the morning, and set out to explore the sites on the East Bank of the Nile. Encounter magnificent Karnak, which many different pharaohs embellished over the centuries, making it the greatest temple complex of them all. Then visit the smaller Luxor Temple, whose builders included both Tutankhamun and Alexander the Great. Enjoy lunch on your own before time at leisure this afternoon. Dinner tonight is at your hotel. (B,D)

Day 11 – Luxor and the West Bank of the Nile

Cross the Nile to the incredible royal necropolises of the West Bank of the Nile. In the Valley of the Kings, descend into several of the site’s 34 royal tombs and admire intricate carvings, hieroglyphs, and bright paintings that adorn the tombs. Continue to the Valley of the Queens and visit the dramatic Temple of Hatshepsut, honoring one of the few female pharaohs. See the Colossi of Memnon, two 64-foot statues of Amenhotep III that once guarded the gates of his tomb. As an added highlight, tour the village of Deir el-Medina, home to the artisans who constructed the Valley of the Kings. Return to Luxor late this afternoon and enjoy dinner together at your hotel.  (B,L,D)

Fly back to Cairo today, and get a taste of local culture on a visit to the bustling Khan el-Khalili bazaar and Old Cairo. (B)

Begin the day at the open-air museum at Memphis, Egypt’s first capital—believed to be some 5,000 years old. Continue to nearby Sakkara, the vast burial ground for Memphis, and visit its distinctive pyramids, including the famous Step Pyramid. Visit the lesser-known site of Dahshur; home to the Bent and Red pyramids. Tonight enjoy a farewell dinner at your hotel. (B,L,D)

Very early this morning, transfer to the airport for your return flight home. (B)