Join us on the vast plains of the Serengeti and Masai Mara, which comprise one large contiguous region teeming with wildlife. This truly classic safari also features the parks of Ngorongoro, Amboseli, and Lake Manyara.

From the Serengeti to the Masai Mara

Join us on the vast plains of the Serengeti and Masai Mara, which comprise one large contiguous region teeming with wildlife. This truly classic safari also features the parks of Ngorongoro, Amboseli, and Lake Manyara. 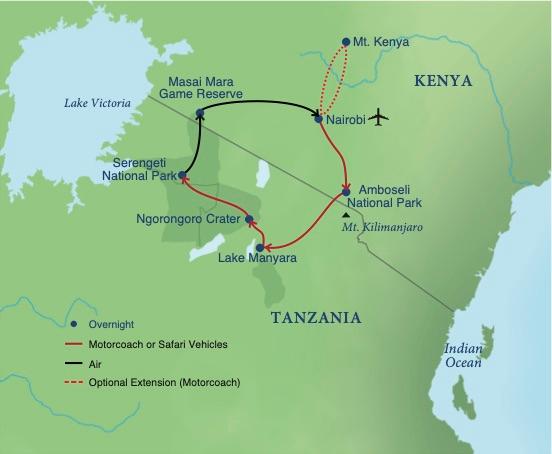 Renowned for their vast plains, the Serengeti and Masai Mara comprise one large contiguous region teeming with wildlife, including lion, leopard, cheetah, zebra, giraffe, gazelle, wildebeest, elephant, buffalo, hippo, and rhino. Visiting these parks, along with Ngorongoro, Amboseli, and Lake Manyara is truly a classic safari.

After arriving in Nairobi, transfer to your hotel. As arrival times may vary greatly, there are no group activities or meals planned.

See highlights of Kenya’s cosmopolitan capital city today, stopping for a tour of the Karen Blixen Museum, the one-time home of the Danish writer who, as Isak Dinesen, wrote Out of Africa.

Also visit the Giraffe Centre, which provides nature education to Kenyan schoolchildren and where you see several of the endangered Rothschild’s giraffe up close.

After returning to your hotel late this afternoon, tonight enjoy a welcome dinner at your hotel. (B,D)

Amboseli National Park stands in the shadow of snowcapped Mt. Kilimanjaro, the Maasai’s “white mountain” and the world’s tallest free-standing mountain at 19,336 feet. Known for its large elephant population, Amboseli boasts wide, dry plains also teeming with herds of wildebeest, zebra, impala, and giraffe. Depart for the park in the morning and spot many of these magnificent mammals on your first game drive this afternoon. (B,L,D)

Early this morning visit a nearby Maasai village to meet the people before they leave to tend their cattle, and to see everyday life up close. Also, visit a local school where you have an opportunity to interact with the children and their teachers.

Then return to your lodge for breakfast and lunch followed by a late afternoon game drive. In between enjoy time to relax at your comfortable lodge in the foothills of Kilimanjaro beneath a copse of feathered acacia trees. (B,L,D)

Tanzania has 13,000 square miles of protected parkland, more than any other country.

Travel today to peaceful Lake Manyara National Park, one of Tanzania’s smallest and most diverse parks. Bordered by the dramatic Western Escarpment of the Great Rift Valley, Lake Manyara is notable for its abundant birdlife, diverse vegetation, tree-climbing lions, and hippos. Relax at your lodge upon arrival, then take an afternoon game drive. (B,L,D)

On the morning tour of the 100-square-mile crater you have your only chance to see all of Africa’s “Big Five” – elephant, buffalo, rhino, lion, and leopard – in one place.

The afternoon is at leisure to relax at your lodge on the crater’s rim. (B,L,D)

Depart this morning, bound for the Serengeti, considered Africa’s finest park and one of the world’s last great wildlife refuges. En route, visit the 31-mile Oldupai Gorge, where in 1959 anthropologist Mary Leakey discovered the 1.8-million-year-old skull of Australopithecus boisei, which revolutionized the study of human evolution. Reaching your lodge, embark on an afternoon game drive. (B,L,D)

The Serengeti, which means “endless plains” in the Maasai language, spans approximately 12,000 square miles and is home to approximately 70 large mammal and 500 bird species. The vast treeless plains teem with animal life yearround, and is the best place to see lion and cheetah up close. Watch for them on today’s two game drives, relaxing at your lodge during mid-day along with discussions about the animal species, ecology, and conservation. (B,L,D)

Leave Tanzania today, flying to Masai Mara, Kenya’s premier game reserve rich with animal life and the traditional homeland of the native Maasai people. Known especially for the annual migration that sees some two million wildebeest, zebra, and Thomson’s gazelle, along with other wildlife. These creatures migrate here from the Serengeti, the Mara sits in the Great Rift Valley and comprises 583 square miles of vast plains, acacia forests, grass-covered hills, and slow-flowing rivers.

Spend today “on safari,” venturing out on early morning and late afternoon game drives during prime viewing hours to glimpse some of the lion, leopard, cheetah, zebra, giraffe, gazelle, wildebeest, elephant, buffalo, hippo, rhino, and other wildlife that call the Mara home. (B,L,D)

Spend another day “on safari,” with morning and afternoon game drives in this preserve, which is just slightly larger than the state of Rhode Island. When not out in the bush, you are at leisure to enjoy the amenities of your luxury tented camp, including the spa and swimming pool. (B,L,D)

Today re-enter the urban world as you fly from the Mara back to Nairobi. Have some time at leisure to freshen up and repack at your hotel.

Tonight toast your safari adventure at a farewell dinner. (B,L,D)

After a morning at leisure, transfer to the Nairobi airport and board your connecting flight to the U.S. (B)

Reach the U.S. today and connect with your flights home. Gorilla Trekking and the Masai Mara: A Tailor-made Journey to Rwanda and Kenya Namibia by Air: A Tailor-Made Journey