Discover the unique architecture, diverse cultural sites, and outstanding culinary traditions of Italy's southeastern Apulia (or Puglia) during this one-week Cultural Stay in Polignano a Mare, a historic town overlooking the Adriatic.

A One-Week Stay in Polignano a Mare

Discover the unique architecture, diverse cultural sites, and outstanding culinary traditions of Italy's southeastern Apulia (or Puglia) during this one-week Cultural Stay in Polignano a Mare, a historic town overlooking the Adriatic. 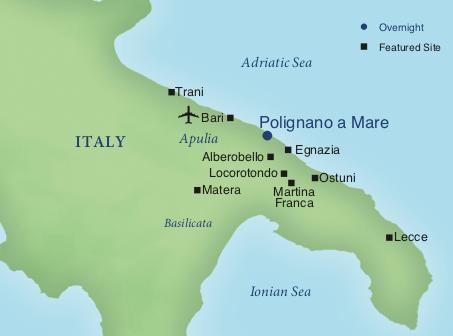 Gaining new recognition, Italy’s southeastern Apulia (or Puglia) is a magical landscape of ancient towns with unique architecture, diverse cultural sites, and outstanding culinary traditions. Explore this region during a one-week Cultural Stay in Polignano a Mare, at the Hotel Covo dei Saraceni, perched on dramatic cliffs overlooking the Adriatic.

Depart the U.S. on your transatlantic flight to Bari, Italy.

Upon arrival at Bari’s Karol Wojtyla International Airport transfer to the Hotel Covo dei Saraceni in Polignano. Your Smithsonian Journeys Travel Director will be available this afternoon and throughout the program for suggestions regarding tours, restaurants and independent activities. This evening gather for opening remarks by your Smithsonian Journeys Expert followed by dinner. (D)

A full American-style buffet breakfast is available each morning during your stay. Today explore Bari, a bustling seaport since ancient times and one that supports a vibrant fishing industry today. Walk the maze of medieval streets and alleyways of the city’s Old Town and admire the Basilica of St. Nicholas built in the 11th century to honor Bari’s patron saint. Stroll through the renowned Murat Quarter. This modern heart of the city is laid out in a rectangular grid and was designed by Joachim Murat, Napoleon's brother-in-law. Afterwards, a stop will be made for lunch at a local restaurant.

On your return to Polignano, a short walking tour is planned. See Lama Monachile, a unique pebbled beach that will lure you to swim in the clear azure sea. Walk through the Porta Vecchia to see the Matrix Church, and the monument to Domenico Modugno, a popular singer and songwriter born here in 1928. Gather this evening for a reception followed by a group dinner at the hotel. (B,L,R,D)

Depart by motorcoach for Locorotondo, one of the most picturesque medieval villages in Italy. This tranquil, well-preserved town sits in the picturesque countryside and is known for its white-washed cummerse, narrow rectangular townhouses with pointed gable roofs. Take an introductory walking tour and free time. Continue for a visit to I Pastini, a vineyard and winery for finger food and a sampling of the regional wines.

Continue to Alberobello, a World Heritage site renowned for its trulli, conical whitewashed houses found nowhere else in the world. These ancient and unique dwellings are pieced together without mortar and are decorated with enigmatic Christian and pagan symbols. Return to the hotel in the afternoon. A local expert will join for a presentation on Slow Food and the Mediterranean Diet. Later, gather in the Smithsonian Journeys Travelers Corner to discuss the day’s discoveries and experiences. (B)

Depart on an excursion to Lecce, often called “Florence of the South,” where you will discover the 17th-century architectural style referred to as the “Barocco Leccese.” See the Piazza Sant’Oronzo, the Colonna Romana which marked the end of the Appian Way, the Roman Amphitheater, and the Basilica di Santa Croce. After the tour, there’s free time for lunch at leisure and to enjoy the town before departing for Ostuni. There, you’ll take a guided tour of the “white city” known for its whitewashed buildings set high atop a hill and spill into the Valle d’Itria below. Discover the Old Quarter to see the magnificent Cathedral and walk atop the ancient city walls. Dinner will be served at a popular local restaurant. (B,D)

Travel to Egnazia to visit what some say are the most significant ancient ruins in Apulia. Many antiquities date from the Bronze Age to Messapian and Roman times. Highlights of the Roman period include the tracks of the Traiàna Road, the Roman Amphitheater, the Forum, and two Christian Basilicas. The Archaeological Museum of Egnazia showcases many artifacts and historical documents related to the town through the centuries. Return to Polignano for lunch at leisure and an afternoon free of planned activities. Early this evening, join fellow travelers in the Smithsonian Travelers Corner for lively conversation. (B)

This morning drive to the city of Matera, located in the region of Basilicata where you’ll discover the early cave dwellings known as sassi that were carved into the limestone by prehistoric people and thought to be the first human settlers in present-day Italy. Throughout the site are more than 100 underground churches decorated with delicate frescoes painted by monks who sought safety from Byzantine armies. The caves, some decorated by lavishly carved facades, provided homes to the local people until the 1950s. The site was designated as a World Heritage site in 1993. Afterward, stroll through the town of Matera, a hilly and complex city of narrow streets, steps, and alleyways. Visit a cave-house to see its various rooms, furnishings, and original household utensils. Continue to see a crypt located in an old cave-church from the 12th-13th century. Lunch will be served at a restaurant in Matera and there’s free time to explore on your own. After returning to Polignano, join fellow travelers for a talk on Contemporary Italy. Dinner is at leisure on your own. (B,L)

Enjoy a scenic drive to the city of Trani, a bustling Adriatic seaport. Gather for a tour of city highlights including the 13th-century Fort, Trani Cathedral, the historic Jewish Ghetto, and houses from the Norman period.

Afterward, take a short drive to Bisceglie and the Galantino family olive mill for a tour and lunch hosted by the owners. Learn about the unique composition of the terrain, the steps in the oil production process, suggestions for using olive oil in your cooking, and the strategy of the mill as it moves forward in today’s world. Return to Polignano after lunch. This evening, join fellow travelers for a farewell reception and dinner at the hotel. (B,L,R,D)

Early this morning, transfer to the Bari International Airport for your return flight to the U.S. (B)

Voyage from Malta to Rome