A new cruise offering from Smithsonian Journeys and PONANT
Set sail on the Aegean Sea, exploring important World Heritage sites from Patmos to Delos and visiting gem-like isles in three different island groups: the Dodecanese, the Cyclades, and the Saronics.

A new cruise offering from Smithsonian Journeys and PONANT
Set sail on the Aegean Sea, exploring important World Heritage sites from Patmos to Delos and visiting gem-like isles in three different island groups: the Dodecanese, the Cyclades, and the Saronics. 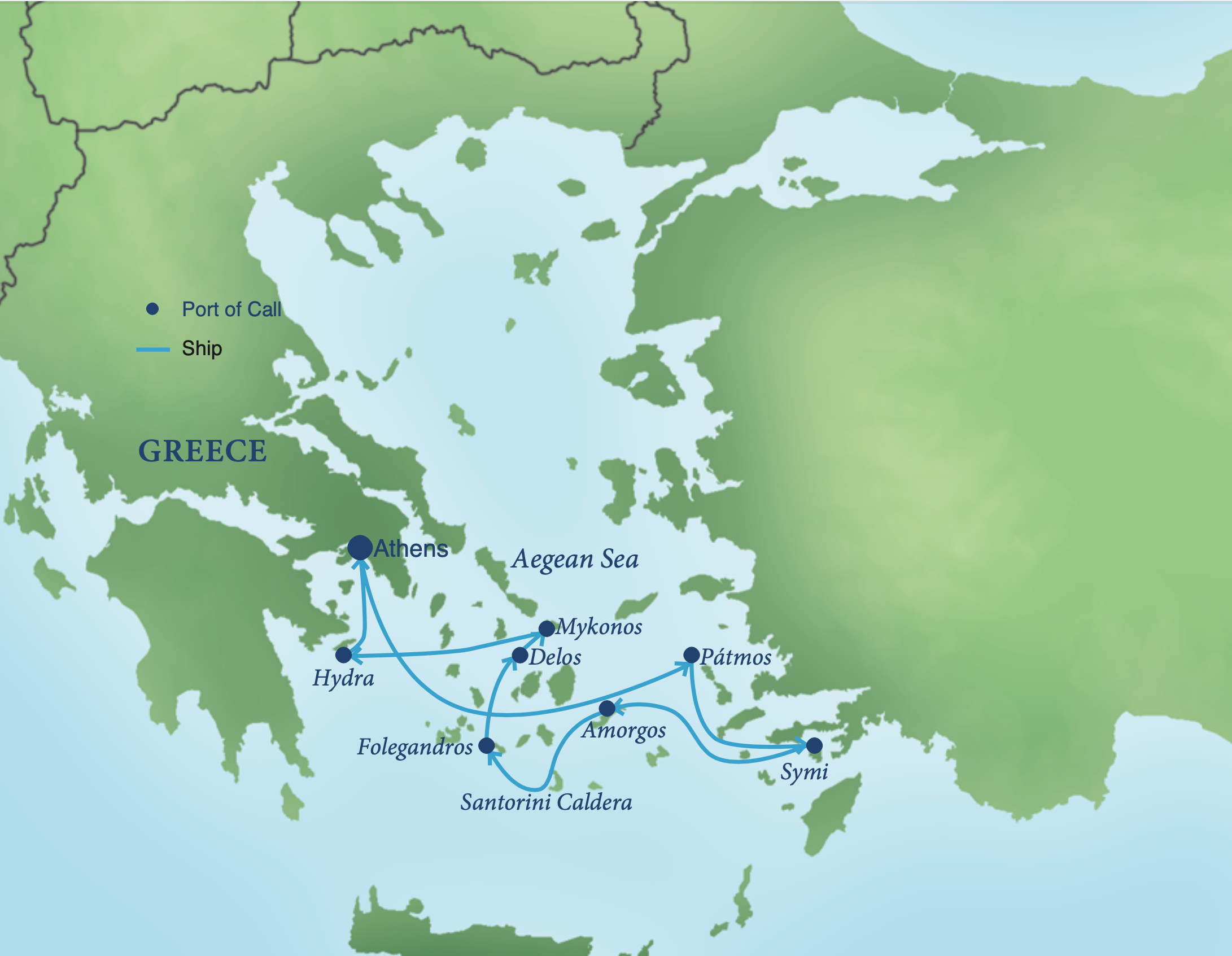 Strung like gems across the turquoise Aegean, the Greek Isles are legendary for their beauty and their importance in the history of Western civilization. Delve into the Classical world and see important World Heritage sites from Pátmos to Delos on a voyage to three different island groups: the Dodecanese, the Cyclades, and the Saronics. Along the way, explore historic sites and delightful villages, get acquainted with local life, and immerse yourself in some of the most spectacular scenery in the Greek Isles.

Arrive in the birthplace of democracy. Home to many of history’s greatest philosophers and poets from Socrates to Herodotus, Athens is unmatched in its contributions to early Western civilization. Embark the ship and enjoy dinner on board this evening as we set sail on the Aegean Sea. (D)

The Dodecanese island of Patmos looms large in the history of Christianity: it was to this rugged island that St. John the Evangelist was banished during the reign of the Roman Emperor Domitian. Set out on a tour of the Greek Orthodox Monastery of St. John, still an active place of religious study and a pilgrimage site, and discover its incredible collection of Byzantine art, including countless frescoes, icons, gold and silver liturgical objects, rare manuscripts, and antiquities. Continue to the Cave of the Apocalypse and its lovely whitewashed chapel, and see the rock grotto where St. John is said to have received the visions of the Apocalypse that later became the Book of Revelation. (B,L,D)

Symi is a gem of an island, with picture-perfect seaside villages stacked up the hillsides and cypress forests, vineyards, and olive orchards blanketing the interior. Spend today exploring the island and its charming port district of Gialos.  Stroll along the quays, lined with brightly painted houses, and climb up to the upper town via the Kali Strata ramp to take in superb views of the coast and the turquoise Aegean. (B,L,D)

The most easterly island in the Cyclades, rugged and beautiful Amorgos remains off the beaten path and largely unchanged by tourism. Spend your day getting acquainted with island traditions on visits to two timeless villages. Meet monks at the 11th-century Monastery of Hozoviotissa, which clings to a cliff some 900 feet above the sea. Continue to picturesque Chora for a leisurely stroll among its whitewashed houses, chapels, and windmills, and a visit to its three small museums. In Lagada, take a guided walk through olive groves, learn about the production of olive oil, and see a demonstration of a traditional village olive press. Continue to Tholaria, a small village overlooking Aegiali Bay. Here, learn about the layout and functioning of a typical Cycladic home, and visit its distillery with a local herbalist, who will explain how essential oils are produced from herbs grown in Amorgos—an age-old Greek tradition. Later, sample local delicacies with a stunning view of the sea. (B,L,D)

Make sure you’re on deck as the ship sails into the breathtaking Santorini caldera. Encountering the gigantic scale and majesty of the high cliffs surrounding this ancient crater is one of the highlights of the cruise. Anchor off the mountainous island of Folegandros, and spend the afternoon exploring its blue-and-white villages and secluded beaches. Visit Chora, its delightful main town, with narrow streets and traditional Cycladic architecture. Admire a view of the port of Karavostasi and go for a swim at a lovely beach near the port. (B,L,D)

The mythical birthplace of Apollo and Artemis, Delos is one of the most sacred places in the Greek world—as central to ancient spiritual life as Olympia and Delphi. Your visit to this World Heritage site begins at the hilltop Sanctuary of Zeus and Athena Cynthiens, where sweeping views of the site give a sense of its grandeur when it was the center of the Delian League. Explore the Sanctuary of Apollo, a rich archaeological site with remains of three separate temples from the 5th and 6th centuries B.C. See the magnificent Terrace of the Lions, where five marble lions have guarded the island for nearly 2,600 years. Walk through a district once filled with mansions to the 5,500-seat amphitheater, the site of choral competitions during the quadrennial Delian festival. After lunch, enjoy an afternoon on charming Mykonos, where iconic windmills, sugar-cube houses, and azure bays epitomize the spectacular beauty of the Greek Isles. During your free time on the island, meander through the Little Venice neighborhood or stop in an ouzeri to nibble mezethes and sip ouzo, the quintessentially Greek aperitif. (B,L,D)

Just off the coast of the Peloponnese lies Hydra, one of the Saronic Islands.  Long a retreat for Greek and international celebrities, Hydra maintains its traditional character—in large part because no motorized vehicles are allowed on the island. Begin your tour at the Historical Archives Museum, housed in an elegant mansion and containing manuscripts, paintings, rare books, and photographs that detail the maritime and military history of the island. At the Church of the Dormitian, see icons and other offerings from wealthy seafarers—including a chandelier that is said to have been stolen from Louis XIV. A short climb brings you to Koundouriotis Mansion, a splendid example of the traditional stone architecture of Hydra. Built in 1780, it now houses items from the National Historical Museum of Athens, such as traditional costumes, jewelry, fine embroideries, pottery and woodcarvings. The opulent interior also displays the heirlooms of this wealthy ship owner and his family.  Enjoy a leisurely stroll back to the port, stopping for a coffee or a taste of a traditional amygdaloto sweet on the promenade. (B,L,R,D)

Disembark in Athens this morning and transfer to the airport for your flight home. (B)