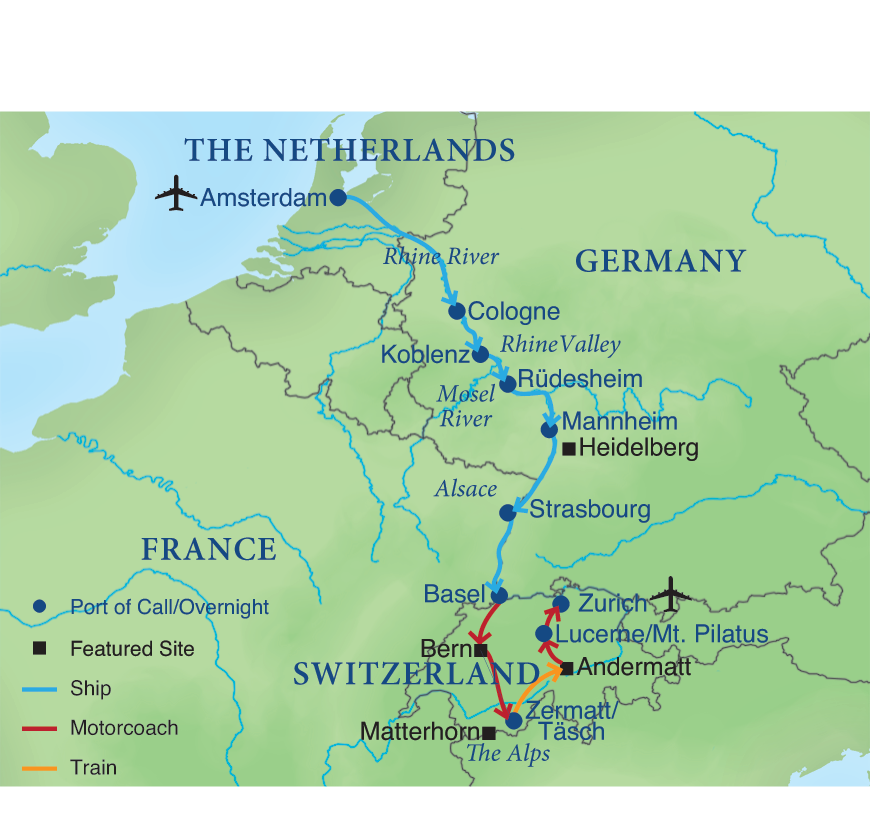 Expectations: This unique journey combines a five-night river cruise with a four-day land journey that features historic trains. River cruise pulls into a pier for excursions. While in the Swiss Alps, expect high altitudes of 7,000 to 10,275 feet, sometimes with fast ascents/descents (of 5,300 feet) during train rides. Day excursions on historic trains require balance for navigating a moving train and ability to climb possible steep steps to board; train rides range from 15 minutes to three hours. Throughout the journey, excursions will be at an active pace and you will often spend the entire day off the ship or outside the hotel. Fully scheduled days are balanced by time at leisure in some ports. There will be some days with early morning departures (8:00 or 8:30 am.) Some standing and walking for long periods of time (up to three hours) during city tours, museum visits, and/or outdoor activities. Walking will be over sometimes uneven terrain (e.g. cobblestones, stairs without handrails, the absence of elevators). Note that this trip entails gondola rides and a lake cruise.

Upon arrival in Zermatt, check into your hotel. (B,L)

Enjoy lunch in Andermatt before continuing to the five-star Hotel Schweizerhof Luzern. The remainder of the afternoon and evening is at leisure. (B,L)

The rugged grandeur of Mounts Pilatus and Rigi reflected in a deep blue waters of Lake Lucerne make this city a long-favored travel destination. Begin your Lucerne walking tour surrounded by historic burghers’ houses in the Weinmarkt (wine market); then, see the Hofkirche (Court Church), an exceptional example of German Renaissance architecture, and the Lion Monument, dedicated to the Swiss Guards who gave their lives defending Louis XVI during the French Revolution. Walk underneath tableaus of Swiss history and mythology painted on the arched roof of the 14th-century wooden Chapel Bridge, Lucerne’s most famous landmark, spanning the Reuss River.

Reach Mount Pilatus’s 7000-foot summit by panoramic gondola for a 360-degree vista of central Switzerland’s unforgettable topography and lunch in a summit restaurant. Board the Pilatus Railway, the world’s steepest cogwheel railway, to descend nearly 5400 feet in less than three miles. Cruise across the lake to Lucerne. The Farewell Reception is in the hotel this evening. (B,L,R)