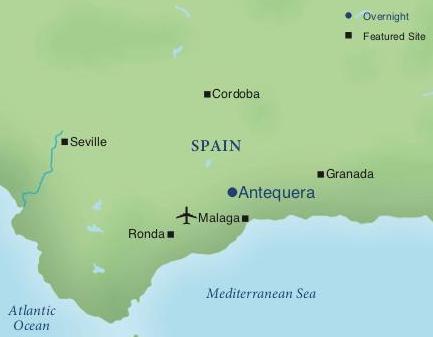 Immerse yourself in the heart of Andalusia and explore the inﬂuence of Moorish, Christian, and Jewish cultures as reﬂected in its art, architecture, cuisine, and culture. Settle into the lovely white hill town of Antequera and the Parador de Antequera, ideal settings for exploring the region.

Depart the U.S. for Malaga, Spain via your transatlantic flight. Arrive at Malaga’s Costa del Sol Airport where you’ll be met by your Smithsonian Journeys Travel Director and assisted with the 50-minute transfer to Antequera. Check-in at the Parador de Antequera, where accommodations have been reserved.

Each traveler will receive a Welcome Package containing information about Antequera and the Andalusian region. Your Smithsonian Journeys Travel Director will be in residence at the hotel and on hand to assist you throughout your stay. There’s time to relax and settle in before joining fellow travelers for a welcome reception and dinner at the Parador. (R,D)

Start each day with a hearty breakfast at the hotel.

This morning journey just outside of Antequera to a complex of ancient megalithic tombs, the Menga Dolmen and Viera Dolmen. Designated as a World Heritage site in 2016, the site is over 5,000 years old and Menga Dolman is considered to be the largest burial mound in Europe. Continue to the Alcazaba de Antequera and a walking tour of the Old Quarter. See El Carmen Church, Palacio de Najera, Convento de Santa Catalina de Siena, the Roman Thermae, Casa Boudere, Plaza San Sebastian, and the Iglesia Colegial de San Sebastian. Later, explore the picturesque cobblestone streets of Antequera, the white city. Your tour concludes at Almenillas where you’ll marvel at the spectacular panoramic views of the city.

After a lunch of regional specialties at a local restaurant, return to the hotel.

Later, enjoy a walk into town for an independent dinner at one of the local restaurants or closer to home at the Parador. (B,L)

Enjoy a scenic drive to Granada and discover the magnificent Alhambra, the city’s world-famous Moorish fortress and palace complex. Built during the 13th and 14th centuries, the Alhambra provides remarkable views of the city, sparkling fountains and pools, courtyards, and shady colonnades. A special lunch of Spanish specialties will be served at the Parador de Granada, formerly a 15th-century monastery on the grounds of the Alhambra.

Return to Antequera in the afternoon. This evening, gather for a group dinner at the Parador.

Please note: The Alhambra Fortress & Palace is a World Heritage site and one of Spain’s most popular destinations. Our group visit will require that we obtain additional information from participants to secure our timed entrance to the grounds. More details about this visit will be included in your pre-tour documents. Participants booking this program within 95 days of departure will require additional confirmation. (B,L,D)

Get an early start on the day with a drive to Seville, the cultural heart of southern Spain. Conquered by the Moors in 712 A.D., they built the famed Alcazar in 939 that later became a royal residence after the Spanish recaptured the city in 1586. Visit the expansive Plaza de España and see the Plaza de America. Drive along the Guadalquivir River and visit the awe-inspiring Cathedral of Seville, the largest Gothic building in the world.

Enjoy lunch independently and time on your own before returning to Antequera late in the day. Gather with fellow travelers in the Travelers Corner for an informal discussion about recent experiences in Spain. Afterward, enjoy dinner at a popular local restaurant. (B,D)

Today, travel to Ronda, one of Spain’s oldest and most remarkable towns, that sits atop a massive cliff. Its twisting streets and lanes reveal architecture influenced by centuries of Moorish influence. Visit the Plaza de Toros, one of Spain’s finest, and the Casa Don Bosco a modernist palace built at the beginning of the 20th century and located at the edge of Tajo Gorge. Step into the Iglesia de Santa María la Mayor, a church commissioned by Ferdinand and Isabella in 1485. The church was built on the site of a mosque and wasn’t completed until the 17th century, so the architecture combines Gothic, Renaissance, and baroque elements as well as vestiges of its Moorish beginnings.

After exploring Ronda, visit the Bodega Joaquim Fernandez for a wine-tasting and lunch.

Back at the Parador, gather in the Smithsonian Journeys Travelers Corner for lively conversation and camaraderie. This evening dine independently. (B,L)

After breakfast, set out for the fascinating city of Cordoba, originally a Roman settlement it was conquered by the Moors in the 8th century. Later, it was recaptured by the armies of Castile during the Reconquista. Visit La Mezquita, a former mosque, which in its day was only rivaled by the Grand Mosque in Mecca. See the Roman Bridge, which spans the Guadalquivir River, tour the Old Town and Jewish Quarter, designated a World Heritage site.

Lunch is enjoyed independently with time to discover Cordoba on your own before returning to Antequera. Join fellow travelers this evening for dinner at a local restaurant. (B,D)

Begin the day with a presentation by a local speaker on Contemporary Spain. Later this morning depart for Malaga, a city currently undergoing a renaissance in the development of culture and the arts. Take a guided tour of the Museo Picasso Malaga, dedicated to the artist in the city of his birth. With a remarkable collection of work from the arc of Picasso’s various periods, the museum showcases them in chronological order so visitors get a sense of how this world-famous artist developed over the years.

Enjoy lunch independently with time to explore Malaga on your own.

This evening, gather back in Antequera for a farewell reception and dinner at the Parador. Traditional flamenco musicians and dancers enhance the evening with their fiery performance. (B,R,D)

Day 9 — Return to your gateway city

After an early breakfast, transfer to Malaga’s Costa del Sol Airport for your return flight to the U.S. (B)

Please Note: Progression of the itinerary may be adjusted due to local operational considerations.

Barcelona: A One-Week Stay in Spain