Travel the length of Vietnam, uncovering centuries of history and culture in Hanoi, Hue, and Hoi An; and witnessing everyday life in spectacular places from Halong Bay to the Mekong Delta.

Travel the length of Vietnam, uncovering centuries of history and culture in Hanoi, Hue, and Hoi An; and witnessing everyday life in spectacular places from Halong Bay to the Mekong Delta.

This was our first Smithsonian tour and we were impressed! It combined first class transportation and accommodations with intelligent and thought provoking seminars plus knowledgeable tour directors and study leaders. It won't be our last Smithsonian Journey. 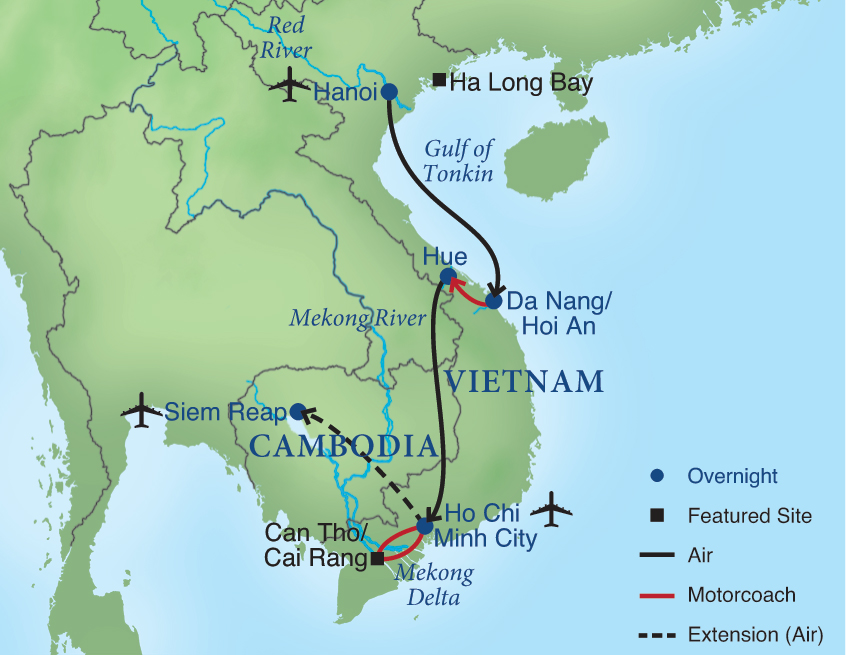 Against a backdrop of breathtaking beauty, Vietnam’s traditions endure, rewarding travelers with a glimpse of the past amid modern changes. Make your way from the delightful Old Quarter of Hanoi to villages of the lush Mekong Delta, where local farmers still sell their produce in floating markets. Explore history amid the World Heritage sites of Hue’s Imperial City and Hoi An, glide among otherworldly karst formations on Halong Bay, and get acquainted with the timeless rhythms of rural life on a visit to a farming village.

This was our first Smithsonian tour and we were impressed! It combined first class transportation and accommodations with intelligent and thought provoking seminars plus knowledgeable tour directors and study leaders. It won't be our last Smithsonian Journey.

Depart the U.S. on an overnight flight to Vietnam’s capital. Settle into your hotel and enjoy the remainder of the day at leisure.

Begin the day with a walking tour of Ba Dinh Square, which is flanked by some of the city’s most important sites.  See the marble and granite mausoleum of Ho Chi Minh and the Presidential Palace, and learn the legend behind the One Pillar Pagoda, originally built nearly a thousand years ago. After lunch on your own, set out to discover more of this French-influenced city on an orientation tour. View the ethereal Hoan Kiem Lake, and visit the Temple of Literature, built in the 11th century to honor scholars. Venture into the infamous Hoa Lo Prison, also known as the “Hanoi Hilton” during the Vietnam War. Later, stroll the narrow, bustling streets of the Old Quarter, where you’ll enjoy a welcome dinner at a local restaurant. (B,D)

Depart on a full-day excursion to the World Heritage site of Halong Bay. Here, the coastal waterway is surrounded by a magical landscape of vertical karst peaks, tufted islets, and hidden caves. Glide across this mystical bay on a tour by local boat to discover some of its 3,000 islands and dramatic rock formations. Enjoy a seafood lunch along the way. (B,L)

Fly south to Da Nang, Vietnam’s third-largest city, stretched along the shores where the French navy first landed in 1858. Visit the acclaimed Cham Museum, which celebrates the Cham people’s Hindu legacy with a fine collection of sculptures and artifacts dating from the 7th to 15th centuries. Then check in to your beachfront hotel and take advantage of an afternoon at leisure. (B,D)

Spend the day in nearby Hoi An, a once-thriving port town that drew traders from Europe, Japan, and China during its heyday in the 15th to 19th centuries. Now a World Heriage site, the town still boasts hundreds of beautifully preserved wooden houses and intricate urban planning that reflect the global influence on local architecture. Soak up the charms of the vibrant Old Town, a pedestrian zone lined with tailors, shops, and art galleries. Tonight, return to Hoi An for a cooking lesson and dinner. (B,D)

Pay a visit to a local farming settlement to get acquainted with everyday life in rural Vietnam. The community is set among dazzling rice fields, where timeless scenes play out: villagers threshing and harvesting rice, water buffaloes plowing the fields, and residents riding to the market on bicycles piled high with produce. Enjoy lunch together in a local restaurant, then have the remainder of the afternoon and evening at leisure. (B,L)

Travel to the imperial capital of Hue, where palaces, temples, and tombs evoke the grandeur and opulence of the Nguyen Dynasty whose emperors ruled here until the 20th century. Venture into the Imperial City, now a World Heritage site, and visit the Central Market where locals shop. Gain insights into Hue’s past during lunch at the home of a local historian. Tonight, gather for a special dinner accompanied by a traditional music performance. (B,L,D)

Embark on a morning cruise along Hue’s Perfume River to Thien Mu Pagoda, a Buddhist monastery.  Admire the architectural details at the majestic Tomb of Minh Mang, and trace the evolution of the Nguyen emperors—and Vietnam—at the tombs of Tu Doc and Khai Dinh. End today’s tour with lunch at Thien, and a visit to a buddhist nunnery, where guests will meet the head bhikkhunī (nun) along with other nuns, and learn about the simple lifestyle the nuns live there. (B,L)

Make your way to the fabled Mekong Delta in Vietnam’s southernmost reaches today. Board an early flight to Ho Chi Minh City (Saigon). Continue your journey with a four and a half hour drive south to the Mekong River town of Cai Be. Travel through the lush delta by road, arriving in the provincial capital of Can Tho, set at the confluence of two Mekong tributaries. Check in to your waterfront hotel and enjoy dinner together. (B,D)

Victoria Can Tho Resort

Rise early for a journey by boat to the floating market at Cai Rang on the Mekong’s lower reaches. Experience the sensory feast of the bustling market, where local farmers and merchants hawks their wares from sampans filled with colorful piles of produce, fish, and other goods. After lunch together at a local restaurant, the remainder of the day is at leisure. (B,L)

Victoria Can Tho Resort

Drive to the upper reaches of the Mekong, where you’ll climb into motorized sampans for an closer look at life on the banks of this storied river. Following lunch at a local restaurant, return by coach to Ho Chi Minh City, arriving late in the afternoon. Take advantage of a free evening to try out one of the city’s many restaurants. (B,L)

Discover the city once known as Saigon on a morning tour. Visit Reunification Palace, the wartime headquarters of the South Vietnamese government wartime headquarters until the Fall of Saigon on April 30, 1975. Meander through palace rooms frozen in time, preserved almost exactly as they were on that day. At the History Museum, browse an excellent collection of art and artifacts that showcase the indigenous cultures of Vietnam. Then delve into Vietnam’s fine art traditions on a visit to the Ho Chi Minh Fine Art museum. Later, attend a traditional water puppet performance. (B,D)

Step back in time on a visit to the Cu Chi Tunnels, the infamous network of hand-dug tunnels and underground chambers from which North Vietnamese forces operated during the Vietnam War. Tonight, toast your Vietnam journey at a farewell dinner. (B,D)

Depart for the airport to catch your return flights to the U.S. (B)

Please note: Depending on flight schedules, certain U.S. cities may require an evening flight from Ho Chi Minh City on Day 15, arriving in the U.S. on Day 16. In this case, hotel rooms will be reserved for late check-out on Day 15. Vietnam, Laos, and Cambodia: A Tailor-Made Journey to Southeast Asia Treasures of Vietnam: A Tailor-Made Journey 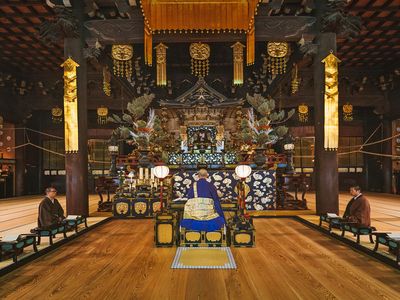