Featuring the Serengeti and Ngorongoro Crater 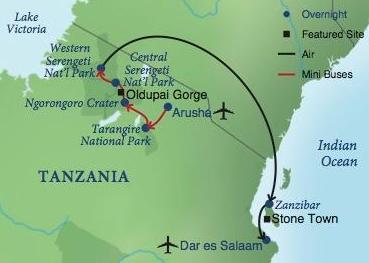 Journey from the depths of the Ngorongoro Crater to the spice plantations of Zanzibar, experiencing Tanzania’s diverse habitats and abundant wildlife. On safari in four national parks, witness the many climate zones of Mount Meru, see the elephants of Tarangire, and watch the timeless interaction of predator and prey in the Serengeti. Get acquainted with the unique traditions of the Maasai and the rich cultural heritage of Stone Town, and cap off your experience on the pristine beaches of Zanzibar’s coast.

Fly overnight to Tanzania and transfer directly to the hotel, where your room is ready for early check in.

Meet your fellow travelers at a morning briefing about the journey ahead. Then set out on an afternoon game drive in Arusha National Park, watching for leopards, zebras, and giraffes against the silhouette of Mt. Kilimanjaro.  The park encompasses Mount Meru, Africa’s fifth highest peak at almost 15,000 feet. Tonight, gather for a welcome dinner. (B,L,D)

Depart on a two-hour drive to Tarangire National Park, a 1,100-square-mile park known for its high concentration of elephants and for the many baobab trees dotting the savannah. Enjoy wildlife viewing en route to your lodge, located within the park. After lunch and time at leisure to enjoy the pool or to relax in your suite, set out on a late afternoon drive, during which you may see zebras, wildebeest, Cape buffalo, giraffes, lions, leopards, and much more. (B,L,D)

Enjoy another day to explore this less-visited park. On morning and afternoon drives, look for cheetahs, elephants, and some of Tarangire’s 550 species of birds. Stop to see one of the enormous termite mounds scattered on the savanna and swampland here. (B,L,D)

Travel into the Ngorongoro Highlands, a wildlife haven that is home to the pastoralist Maasai people. On the way, stop for a a visit to Mto Wa Mbu, a small town where members of some 120 Tanzanian tribes co-exist. Visit with farmers and schoolchildren, merchants and artisans, and get a firsthand look at the diverse traditions of different tribes. Stroll through the market, watch weavers create papyrus mats or woodcarvers plying their trade, and top off your guided visit with lunch at a banana plantation. Later, settle into your safari lodge, perched on the rim of the Ngorongoro Crater and designed to blend in with the surrounding landscape. Take advantage of an afternoon at leisure to relax at the lodge and admire spectacular views of the vast crater below. (B,L,D)

Descend to the floor of magnificent Ngorongoro Crater, a 100-square mile, intact volcanic caldera that harbors some 25,000 creatures in a range of habitats—from grassland and swamps to lakes and forests.  On today’s safari, seek out elephants, black rhinos, lions, hippos, and all manner of birdlife. (B,L,D)

Depart the Ngorongoro Highlands and stop at Olduvai Gorge, a 31-mile chasm that has yielded historic fossil finds. It was here in 1959 that anthropologist Mary Leakey discovered the 1.8 million-year-old skull of Australopithecus boisei – and revolutionized the study of human evolution. Part of the World Heritage-listed Ngorongoro Conservation Area, Olduvai ranks as one of the world’s most important paleontological sites. Pay a visit to a Maasai village to learn about local traditions. Then continue to Serengeti National Park, named for the Maasai word meaning “endless plain.” On an afternoon safari, encounter large herds of zebra and wildebeest in the grasslands and predators on the hunt. (B,L,D)

Located in Tanzania’s northeastern corner, bordering Kenya’s Masai Mara National Reserve, the vast Serengeti stretches across an area the size of Connecticut.  From January to February and June to October, it plays host to one of the most legendary wildlife spectacles on the planet: the migration of some 1.3 million wildebeest, 200,000 zebra, and 300,000 Thomson’s gazelle. The Serengeti’s plains teem with animal life year-round, and this is the best place to see lions and cheetahs up close. Enjoy two full days to explore the park on morning and afternoon drives, watching for Africa’s “Big Five”—lion, Cape buffalo, elephant, rhino, and leopard—as well as ungulates, hyenas, and some 500 species of birds. (B,L,D)

Set out on a morning tour of a spice plantation, learning how cloves, nutmeg, ginger, chilies, black pepper, vanilla, coriander, and cinnamon are grown. Later, cruise to Prison Island, a tiny, idyllic isle that is home to a colonial prison that never held any inmates. Here, pay a visit to a sanctuary for rare Aldabra tortoises. Then celebrate your Tanzanian adventure at tonight’s farewell dinner. (B,D)

A quick morning flight brings you to the capital city of Dar es Salaam, where you have a day room at a local hotel. After a free afternoon and an early dinner, transfer to the airport for an overnight flight and arrive in the U.S. the next morning. (B,D) Wildlife of Tanzania: A Tailor-Made Journey 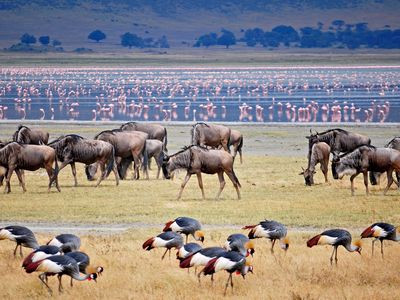 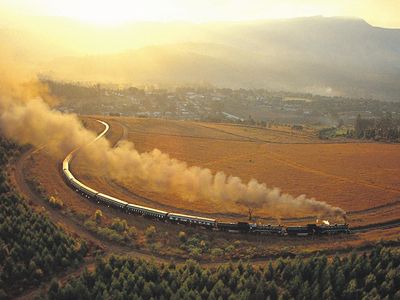