The Amalfi Coast is renowned for its stunning coastline of pastel-colored villages perched on steep cliffs above the Mediterranean, its spectacular World Heritage sites, and sophisticated resorts. Join us in the Italian provence of Campania on this one-week Cultural Stay in Vietri sul Mare and experience the treasures of southern Italy.

The Amalfi Coast is renowned for its stunning coastline of pastel-colored villages perched on steep cliffs above the Mediterranean, its spectacular World Heritage sites, and sophisticated resorts. Join us in the Italian provence of Campania on this one-week Cultural Stay in Vietri sul Mare and experience the treasures of southern Italy. 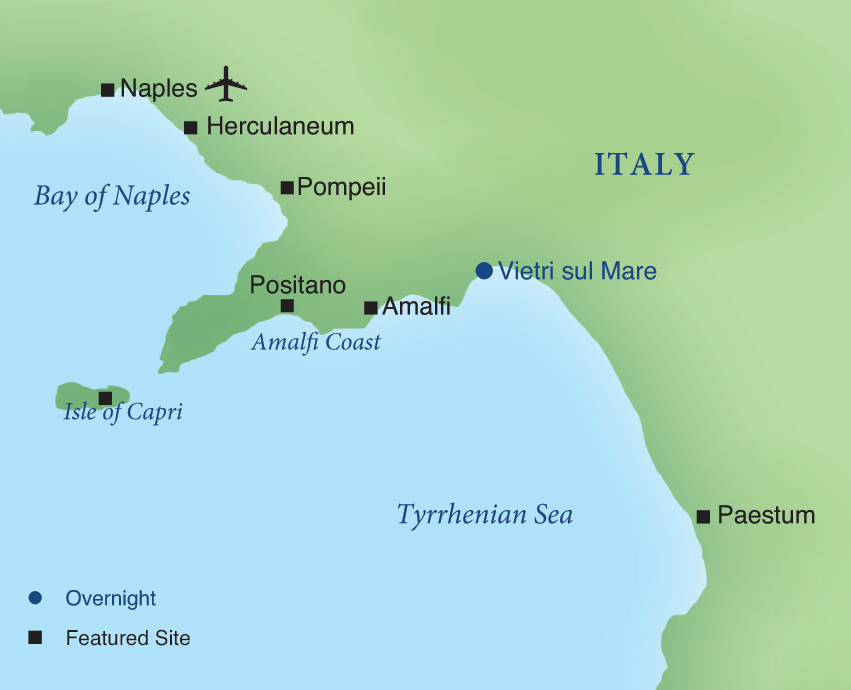 Italy's Amalfi Coast is renowned for its stunning coastline of pastel-colored villages perched on steep cliffs above the Mediterranean. For centuries, writers, artists, and emperors have found inspiration and respite in this stunning region, as have travelers like us. Join us at a new location on the Amalfi Coast, the Hotel Raito in Vietri sul Mare, and enjoy a leisurely sojourn that features World Heritage sites, breathtaking landscapes, and luscious cuisine and wine.

Depart the U.S. on your transatlantic flight to Naples, Italy.

Arrive at Naples Capodichino Airport and transfer to Vietri sul Mare and the upscale Hotel Raito situated high above the Gulf of Salerno. Upon arrival at the hotel, you’ll receive a Welcome Package with maps and general information about Campania and the Amalfi Coast. Your Smithsonian Journeys Travel Director will be in residence and available this afternoon and throughout the program for suggestions regarding sightseeing, restaurants, and independent activities. The evening begins with a welcome reception and an introductory talk by your Smithsonian Journeys Expert. A welcome dinner will follow at the hotel. (R,D)

Each morning, a full American-style breakfast is served complete with magnificent views of the Gulf of Salerno. It has been said the beauty of the Amalfi Coast, a World Heritage site, defies description. A drive along the hairpin coastal road, built high above the sea, offers breathtaking views and is one of the world’s most remarkable travel experiences. Visit Ravello, where you’ll will discover the exquisite Villa Rufolo, the place that provided the German composer Richard Wagner inspiration for his opera Parsifal. Hear about the Villa’s history and see some of the most impressive views of the Amalfi Coast. Continue to the iconic town of Amalfi where you’ll enjoy a walk through the town to see its central piazza and the Cathedral of Saint Andrea. After leisure time, emjoy a scenic cruise along the remarkable coastline to the delightful town of Positano. After an orientation talk about the town, there's free time to explore and have lunch independently. Later, gather and return to the hotel by motor coach. This evening, get together with fellow travelers for a dinner of regional specialties at a local trattoria. (B,D)

Depart this morning on an excursion to visit the breathtaking antiquities of the World Heritage site of Paestum. Located on the Tyrrhenian Sea, the site exhibits the best-preserved examples of ancient Greek architecture outside Greece. Known as Poseidonia during ancient times, the site includes spectacular remains of Doric temples honoring Hera, Neptune, and Ceres. Spend time exploring the Paestum National Archaeological Museum that showcases fascinating artifacts and smaller finds from Foce del Sele and others around the site. After lunch at a restaurant near the ruins, meet local people for a discussion about life in Italy today. After returning to the hotel, attend the talk Wonders of Naples’ National Museum by a local speaker. (B,L)

Depart on a fascinating excursion to Naples, a World Heritage site. Explore the Museo Archeologico Nazionale, a compelling archaeological museum that showcases remarkable Roman artifacts and the Farnese Collection of Roman paintings and sculptures. Marvel at the antiquities from Herculaneum and Pompeii including mosaics, domestic items, weapons, and murals. From Posillipo Hill, rising above Naples, take in the panoramic views of the Castel Nuovo, the Piazza Plebiscito, the world-famous Teatro San Carlo, one of the most iconic opera houses in the world, and the Church of San Franceso di Paola. After lunch featuring Neapolitan pizza, return to Vietri sul Mare where the balance of the day will be free of planned activities. Later, spend some time in the Smithsonian Journeys Travelers Corner discussing the day’s discoveries. (B,L)

After breakfast, depart the hotel by motor coach then board a hydrofoil for the famed Isle of Capri. Known for its grottoes and rocky promontories, the island is majestically surrounded by clear azure water. On a cruise around the island, you’ll marvel at the Faraglioni Rocks and see the contemporary Casa Malaparte. Once ashore, spend time exploring the main town of Capri with it’s breathtaking views, quiet side streets, and the Augustus Gardens. You might want to head for the heights of Anacapri for sweeping panoramas. Return by hydrofoil then drive to the hotel. Dinner will be served at a local restaurant. (B,D)

Depart the hotel after breakfast for an excursion to Sorrento. On arrival, there’s a brief orientation of the town while strolling along the Corso Italia and Via San Cesareo. Walk to the cliff’s edge and take in views of the Bay of Naples and Mt. Vesuvius. Then, enjoy free time to explore on your own. Continue from Sorrento to the hills above the town where orange and lemon groves compete for primacy with olive groves. Visit a farm and tour the olive grove to see the process of how virgin olive oil is produced. Later, see the rest of the farm including the production of a soft cheese known as Fior di Latte. Afterward, enjoy sampling the locally-made foods. Return to the hotel and an evening at leisure. (B,L)

Early today depart the hotel for a fascinating visit to the Roman cities of Herculaneum and Pompeii with an expert guide. These World Heritage sites were both destroyed in the catastrophic eruption of Vesuvius in A.D. 79. Herculaneum was buried by mud flows which preserved the small, ancient seaside town much as it was on that fateful day. Walk through the site and get a real sense of the splendor of this Roman city. Continue to Pompeii, the larger of the two which was covered by ash, but is known for its overall exceptional state of preservation and including the original frescos. Visit the archaeological site including its theatres, bath houses, remarkable villas, the forum, and view some of the artifacts and plaster casts excavated from this historic archaeological site. A light lunch will be served in Pompeii. This evening, join fellow Smithsonian Journeys travelers for a farewell reception and dinner at the hotel. (B,L,R,D)

Early this morning, transfer to the Naples International Airport for flights to the U.S. (B)

Please note that the progression of this itinerary may change due to operational considerations.