Immerse yourself in Sicily’s unique cultural heritage, discovering fascinating archaeological ruins, delectable cuisines, lively towns, and five World Heritage sites as you make your way from Palermo to Agrigento, Syracuse, and beyond.

An In-depth Exploration of History and Culture

Immerse yourself in Sicily’s unique cultural heritage, discovering fascinating archaeological ruins, delectable cuisines, lively towns, and five World Heritage sites as you make your way from Palermo to Agrigento, Syracuse, and beyond. 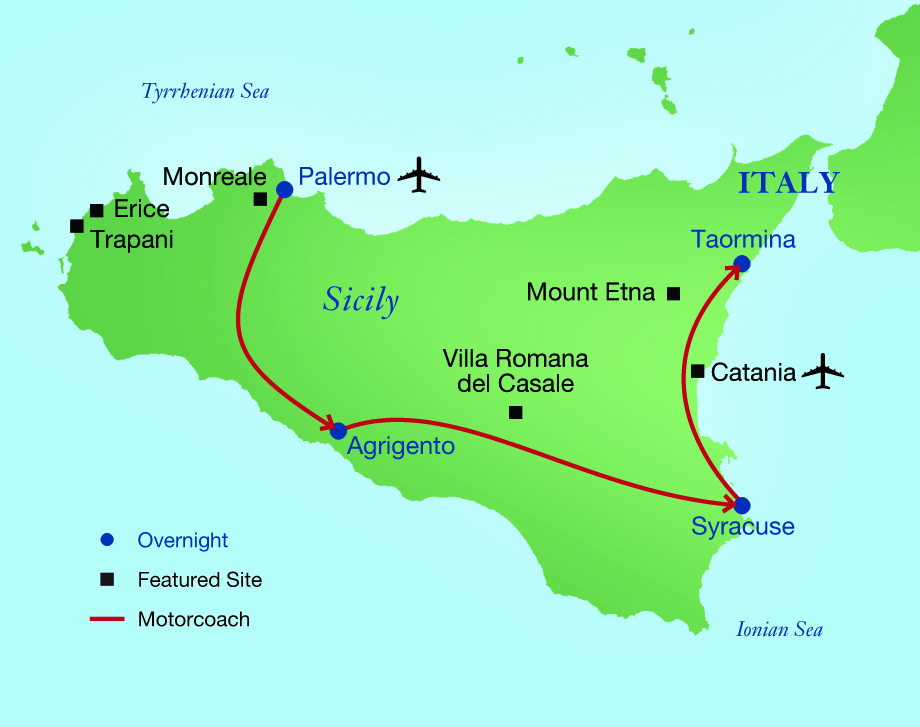 Blanketed in orchards and scattered with vestiges from antiquity, Sicily is home to seven World Heritage sites and one of Europe’s largest active volcanos. Explore the island’s north, south, east and west, discovering the legacy of the many cultures that ruled here, from the ancient Greeks to the Normans. Encounter unique cuisine and architecture in Palermo, and meander among Doric ruins in the Valley of the Temples. See the breathtaking mosaics and frescos of the Villa Romana del Casale. Cruise the Ionian Sea, admiring views of Ortigia, and sample wines at a family farm on Mount Etna before ending your Sicilian sojourn in enchanting Taormina.

Travel on an overnight flight to Europe and connect to Palermo, on Sicily’s northern coast. Check in to your hotel and gather for a welcome briefing and dinner. (D)

Start the day with a walking tour of this 2700-year-old city, known for its unique Arab-Norman architecture as well as its world-class street food.  Visit the Palermo Cathedral and the Palazzo Reale, both parts of an expansive World Heritage site that dates from the 12th century, when Norman kings ruled Sicily. Venture into the baroque city center to see its elegant piazzas and historic churches.  Then stroll through an outdoor market where locals come to buy arancini, cannoli, and other specialties.  Sample Sicilian cuisine during lunch at a local restaurant.  The remainder of the day is yours to further explore Palermo, relax at your hotel, or find a nearby café and take in the sights and sounds of the town.  You may wish to attend a performance at the Teatro Massimo, located a short walk from our hotel, or learn more about Sicily’s distinctive cuisine at one of Palermo’s fine restaurants. (B,L)

Spend today discovering Sicily’s northwest corner, beginning with the medieval walled town of Erice, perched atop a mountain nearly 2,500 feet above sea level. Explore the town’s winding stone streets, and take in panoramic views of the valley below, the port town of Trapani, and the Tyrrhenian Sea beyond. Descend to Trapani, a port city edged by salt pans that have been in use since the Phoenicians inhabited the region some 2,700 years ago.  Learn how salt is still harvested here using centuries-old methods and see antique salt-making tools at a museum housed in an old mill.  After lunch together, return to Palermo for an afternoon and evening at leisure. (B,L)

Set on the slopes of Monte Caputo, the town of Monreale looks over La Conca d’Oro, a fertile valley blanketed with orange, olive, and almond groves. On a morning visit, tour the city’s celebrated cathedral, another piece of the Arab-Norman Palermo World Heritage site and one of the finest examples of Norman architecture still in existence.  Admire the extraordinary mosaics that cover the walls and ceilings of the interior—they contain some 4,850 pounds of gold.  Stop in at a family-owned winery for a wine tasting and lunch, then continue south through Sicily’s verdant interior to our hotel near Agrigento. (B,L,D)

Day 6 — Agrigento / Valley of the Temples

Step back thousands of years on a visit to the Valley of the Temples, part of the Agrigento archaeological zone containing the vestiges of an ancient Greek city once known as “the most beautiful city of mortals.” Here, seven Doric temples and sanctuaries dating to the 5th and 6th centuries B.C. line a picturesque ridge. Explore the Temple of Ercole, one of the oldest of the temples; the beautifully preserved Temple of Concordia, which was later transformed into a Christian church; and the Temple of Olympian Zeus, the largest known Doric temple. Gain further insights into the significance of these evocative ruins at the Museum of Agrigento. After lunch at leisure and free time this afternoon, reconvene for a cooking demonstration and dinner together. (B,D)

Travel to the small town of Piazza Armerina, home to the spectacular Villa Romana del Casale. This elaborate 4th-century villa, now a World Heritage site, was long buried by landslides, which preserved its vivid frescoes and vast collection of Roman mosaics. Admire the scale and detail of this treasure trove of art, which covers nearly every floor and wall with intricate patterns and scenes of hunts, sporting contests, and everyday life.  After lunch here, continue east to Syracuse, once one of the most powerful cities in the Hellenistic world.  Enjoy dinner at our hotel tonight. (B,L,D)

Trace the history of this strategically located port city, yet another of Sicily’s World Heritage sites.  Discover the 16,000-seat Greek amphitheater built in the 5th century BCE and still in use today.  Visit Latomia del Paradiso, a wide, shallow quarry from which the white limestone used to build ancient Syracuse was cut.  Its walls contain tunnels and catacombs, including a tall, narrow cavern known as the Ear of Dionysius for its fine acoustics.  Hear the legends associated with the cave, then continue to the 1st-century Roman amphitheater where gladiators once battled. Set off on a walking tour of Ortigia, a tiny island brimming with historic monuments at the mouth of the harbor.  Take advantage of time at leisure this afternoon to explore on your own. Gather for dinner together at our hotel. (B,D)

Enjoy a leisurely morning cruise along Sicily’s Ionian coast, sailing past tiny islands and seaside caves. Take in views of Ortigia from the sea, including the medieval Castello Maniace on the tip of the island, once home to the kings and queens of Sicily.  Return to Ortigia for free time and lunch on your own.  Then enjoy time to relax at the pool or in the beautiful gardens of your hotel before dinner together. (B,D)

Follow the coast north to Taormina, stopping along the way to visit Mount Etna, one of Europe’s largest active volcanoes.  Learn the myths and legends associated with the mountain since ancient times and see its great folds of molten lava seemingly frozen in time.  On the way down the mountainside, stop at a farm set amidst acres of lemon and kiwi groves that thrive in the lava-enriched soil. Sit down to a hearty lunch prepared by the family who lives here, accompanied by excellent Sicilian wines.  Continue to Taormina, arriving at the hotel late this afternoon. The evening is yours to discover this enchanting town as you wish.  Be sure to leave room for gelato, the delicious Italian ice cream said to be derived from locals flavoring snow found on Mount Etna. (B,L)

Poised on a rocky terrace overlooking the Ionian Sea, Taormina has been a popular resort since the 19th century, drawing intellectuals, artists, and writers such as D.H. Lawrence, Evelyn Waugh, and Truman Capote.  Your tour includes the 3rd-century BC Greek theater, built on a hillside with sweeping sea views; the 13th-century Duomo; and the Piazza Vittorio Emanuele, site of the ancient agora and later the Roman Forum. In the afternoon, discover Taormina as you wish, perhaps visiting a lovely beach or strolling past cafés and shops on the lively Corso Umberto.  This evening, bid arrivederci to Sicily during a festive farewell dinner at a local restaurant. (B,D)

After breakfast, depart for the Catania airport, and connect with your onward flights. (B) 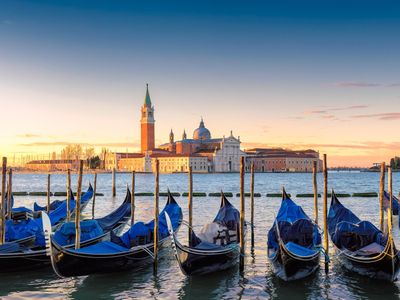