Join us for an insightful tour that showcases the history, culture, and natural beauty of England, Scotland, and Wales.

Join us for an insightful tour that showcases the history, culture, and natural beauty of England, Scotland, and Wales.

"Smithsonian Journeys offers the best possible combination of exploration and education. Expert commentary and distinctive accommodations make the difference and give one great value!"

- Mousa and Kristin I.

Highlights of Great Britain was my first overseas trip, and it was an excellent introduction to the delights of world travel! Smithsonian Journeys provided wonderful accommodations and an itinerary of interesting adventures each day. 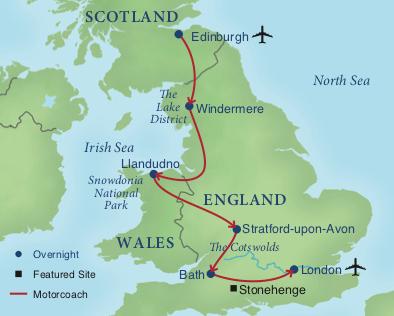 Join us for a new insightful tour that showcases the history, culture, and natural beauty of England, Scotland, and Wales.

"Smithsonian Journeys offers the best possible combination of exploration and education. Expert commentary and distinctive accommodations make the difference and give one great value!"

- Mousa and Kristin I.

Highlights of Great Britain was my first overseas trip, and it was an excellent introduction to the delights of world travel! Smithsonian Journeys provided wonderful accommodations and an itinerary of interesting adventures each day.

Arrive in the Scottish capital and transfer to your hotel. As guests’ arrival times may vary greatly, no group activities have been planned during the day; though the tour director will lead an orientation walking tour of the neighborhood surrounding your hotel late this morning. Late this afternoon, meet for a welcome briefing followed by dinner with your fellow travelers. (D)

The morning tour of this stately city built on seven hills includes the 18th-century “New Town” and the medieval “Old Town,” where you visit Edinburgh Castle, the symbolic heart of Scotland. This afternoon is at leisure to discover Edinburgh as you wish; museums, galleries, and shops abound. Dinner tonight is on your own, and Edinburgh boasts a robust culinary scene. Guests on the August departure will enjoy an evening performance of the Royal Edinburgh Military Tattoo. (B)

This morning encounter the Royal Mile, the historic boulevard connecting Edinburgh Castle with the Palace of Holyrood House. Tour Holyrood, as it is called, and see where British royalty schemed and slept as you tour the State Apartments. After lunch at a local restaurant, the remainder of the day is free for independent exploration and dinner on your own. (B,L)

Departing Edinburgh this morning, you’re bound for the beautiful – and beloved – Lake District of northwest England, a national park and diverse landscape of lakes, rivers, ancient woodlands, and small towns and villages. On arrival stop at Dove Cottage, where English Romantic poet William Wordsworth penned some of his most memorable lines. Late afternoon reach your hotel on the shores of Lake Windermere; dine tonight at the hotel. (B,L,D)

Today’s excursion begins with a cruise on idyllic Windermere, England’s largest lake. Continue to the village of Hawkshead, where you have time for lunch on your own followed by a visit to Hawkshead Grammar School, famously attended by poet William Wordsworth. Next, visit the Beatrix Potter Gallery, showcasing the original artwork of the author who lived nearby in the early 1900s. (B,D)

From here travel on to Wales and your hotel, where you dine this evening. (B,D)

Known as both the “land of castles” and the “land of song,” Wales is also a land of fierce natural beauty, as we see for ourselves on this morning’s visit to Snowdonia National Park. Named for Snowdon, at 3,560 feet the tallest mountain in England and Wales, the park comprises 840 square miles of unspoiled wooded valleys, mountains, moorlands, lakes, and rivers. The park was officially created in 1951, making it Wales’s first national park, and covers more than 10% of the land area of the country. We visit Snowdonia in style, riding aboard either the Welsh Highland Railway or the Ffestiniog Railway. Both lines are pulled by steam locomotives and provide a scenic ride through dramatic Snowdonia National Park.

Then we head to the port town of Conwy for a visit to 13th-century Conwy Castle, a medieval fortress whose brute appearance symbolized English domination over the Welsh. Strategically set at the mouth of its namesake river as it empties into Menai Strait, the castle was built starting in 1283 by King Edward I of England. This World Heritage Site ranks as one of the finest pieces of 13th-century military architecture remaining in Europe, with some of the UK’s best-preserved medieval chambers in store for us once we enter the castle.

Mid-afternoon we return to Llandudno, dubbed “Queen of the Welsh Resorts,” where we dine at our hotel tonight. (B,D)

Returning to England today, visit Stratford-upon-Avon, where touring includes a visit to Shakespeare’s birthplace, a restored 16th-century half-timbered house where the Bard is believed to have been born in 1564. Also tour Anne Hathaway’s Cottage & Gardens, the thatched farmhouse of Shakespeare’s bride that still contains some original furnishings. Then enjoy time in this 800-year-old market town for lunch on your own and to explore independently before dining together at your hotel this evening. (B,D)

Day 10 — The Cotswolds and Bath

Today encounter the Cotswolds, England’s south-central region of gently rolling hills dotted with villages of honey-colored limestone, market towns, and unspoiled countryside, looking much as it did 300 years ago. Arrive in Bath mid-afternoon, with the remainder of the day and this evening at leisure. (B,L)

Set out on a morning tour of this storied and graceful city where the ancient Romans first “took the waters” at England’s only hot springs. Today the historic Roman Baths count among the city’s most popular sites, along with Bath Abbey, the 18th-century Assembly Room, The Circus, and the Royal Crescent, all of which you see on your tour.

The afternoon is free to explore as you wish before dining together at your hotel this evening. (B,D)

Leave your pastoral days behind as you travel today to London, stopping en route to see Stonehenge, the 4,500-year-old Neolithic monument that remains something of a mystery today. That the prehistoric circle of stones is a masterpiece of engineering and building is undisputed; exactly why it was created is less certain. Next visit Windsor, site of British royalty's Windsor Castle, where you have free time to explore on your own before you continue on to London, arriving late this afternoon. (B)

A panoramic city tour this morning passes such celebrated London landmarks as the infamous Tower of London, grand Parliament and Big Ben, Buckingham Palace, Westminster Abbey, and Hyde Park. Your afternoon is at leisure to explore this wondrous city as you wish; theater, museums, parks, a boat ride on the Thames – London offers an embarrassment of riches from which to choose. Tonight celebrate your journey through Britain at a farewell dinner at a local restaurant. (B,D)

Transfer this morning to Heathrow airport for your flights home. (B)