From Stockholm to Copenhagen aboard the 184-guest Le Champlain

Discover the rich history and culture of the Baltic Sea region as you cruise to some of northern Europe’s most intriguing cities. Step into the past in the World Heritage-listed medieval old towns of Riga, Tallinn, and Visby. Trace 20th-century history in Gdansk, Poland, during an exclusive presentation by Nobel Peace Prize Laureate Lech Walesa, who led the revolutionary Solidarity movement. Explore the islands of Gotland and Bornholm, and soak up local culture in seaside Klaipeda, Lithuania.

The Smithsonian Journeys / PONANT Experience: The  cruise will be accompanied by two Smithsonian Journeys Experts. An excursion or activity is included in each port of call. You may have a choice of excursions in many ports, so that you can delve more deeply into subject areas of interest. 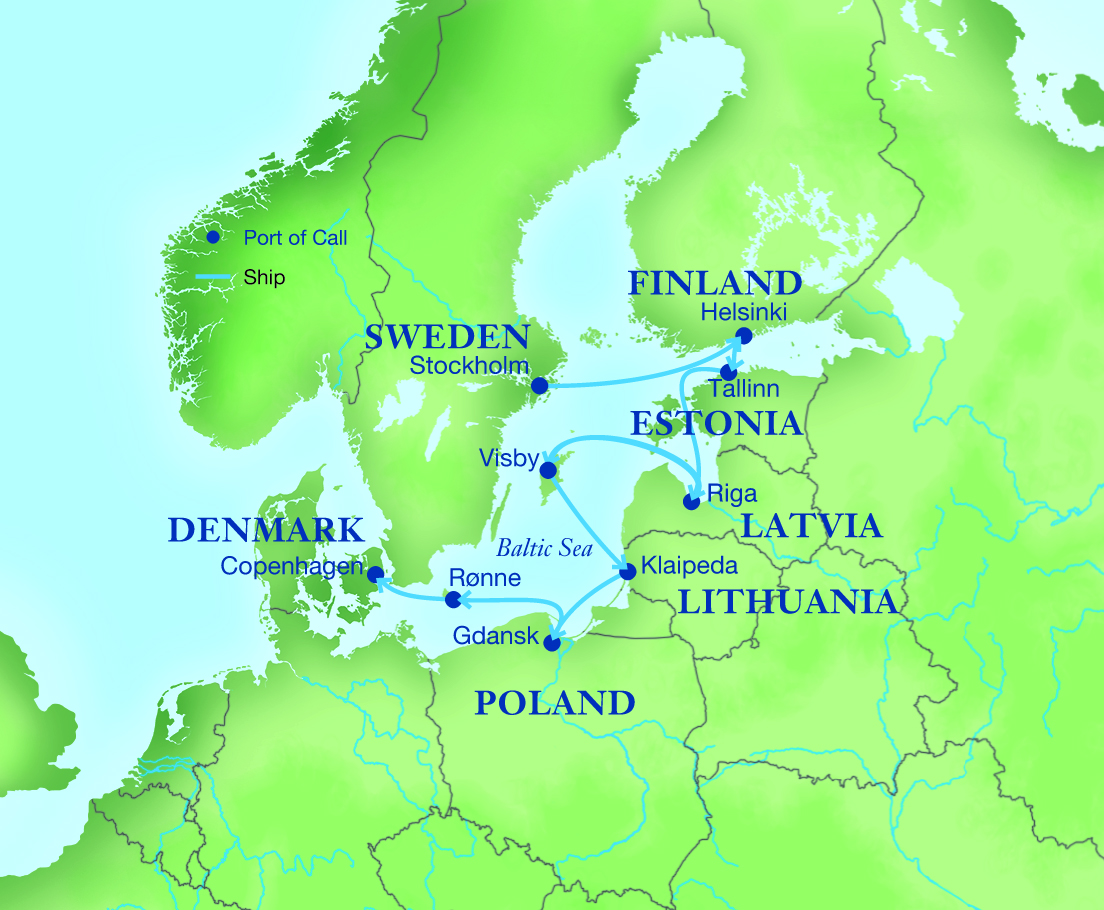 Arrive in Sweden’s magnificent “Venice of the North” and embark the ship. Be on deck as you cruise through the scenic Stockholm archipelago. (D)

Helsinki was named the World Design Capital in 2012 for its innovative use of design in stimulating an urban environment. Stand on deck as the ship approaches the city for the best view of the 18th-century maritime fortress of Suomenlinna, a World Heritage site. On a city tour, visit the stately Senate Square and the modernistic Temppeliaukio Church, or “Church of the Rock,” impressively hewn out of natural bedrock. See the Sibelius Monument, dedicated to Finland’s greatest composer, and enjoy free time to explore the lively Market Square. Alternatively, take the ferry to Suomenlinna for a guided tour of its historic fortress. (B,L,D)

Having largely escaped the ravages of World War II, Tallinn’s World Heritage-designated Old Town has remained virtually unchanged for 600 years. During a walking tour of both the Upper and Lower Town, see Toompea Castle, the seat of Estonia’s Parliament; the landmark Alexander Nevsky Cathedral; and the 13th-century Church of St. Nicholas. Then descend to the Lower Town to visit the the lovely Church of the Holy Spirit and the 15th-century Town Hall, the only intact Gothic-style hall in Northern Europe. Step back in time at a medieval apothecary, and enjoy free time to explore the craft market on the grounds of the Dominican Convent.

Alternatively, delve into Estonia’s 20th-century history, from its establishment as a republic in 1918, through Soviet occupation, and to its Singing Revolution, which reestablished Estonia’s independence in 1991. Take a guided tour of Maarjamäe Palace, now a history discovery center, and learn the story of Estonia’s people over the past century. See monuments of communist leaders collected from all over the country, and visit the Memorial to the Victims of Communism. End your excursion with a walking tour of the most important sites of the Old Town. (B,L,D)

Topped with church spires and filled with Art Nouveau architecture, Latvia’s capital city was founded in 1201 and is today a lively hub of contemporary culture and cuisine. Board wooden boats and set off down Riga Canal, once the moat that surrounded the medieval city. Glide through history, passing important monuments that tell the story of the city’s Hanseatic heyday and its troubled 20th century. See the modern city on a panoramic tour before exploring the World Heritage site of Old Riga on a guided walking tour. Venture into the Dome Cathedral, home to an immense organ with more than 6,700 pipes, and stroll through Town Hall Square and Livu Square to admire stunning architecture and learn their history. Or tour the city by motorcoach and on foot, stopping to enjoy an organ recital at the Dome Cathedral. (B,L,D)

Drop anchor off the Swedish island of Gotland and venture to Visby, a walled city built on a Viking site that was a thriving center of Hanseatic League from the 12th to the 14th century. Photograph sweeping island views from the Gallow Hill, a medieval execution site, then set off into the cobblestoned streets of this beautifully preserved World Heritage site, lined with original merchants’ dwellings and medieval warehouses. Your walking tour includes the Cathedral of St. Mary, which dates to the early 1200s, as well as the renowned Gotland Museum and the rose-filled botanical gardens.  (B,L,D)

Spend a day discovering the Lithuanian coast on your choice of three excursions. Stroll among half-timbered houses in the Old Town of seaside Klaipeda, a hub of German-influenced architecture and historic treasures, and enjoy a performance of traditional Lithuanian songs followed by a tasting of typical Lithuanian dishes. Or venture to the Curonian Spit, a long and narrow piece of land recognized as a World Heritage site for its unique amalgam of culture and nature. Take a walk in Juodkrante, the oldest fishing village on the spit, see artifacts made from locally mined amber, and learn the legends of the mystical Hill of Witches. Alternatively, visit a cultural center that showcases Lithuania’s 20th-century history before venturing into the countryside to the small village of Samogitia. Here, spend time at a family-owned bee farm. Learn about the age-old Lithuanian tradition of beekeeping, see how honey is made, and enjoy a tasting. (B,L,D)

Arrive in the vibrant seaside town of Gdansk, where a movement by shipyard workers upended European geopolitics in the late 20th-century. Go on a walking tour of its charming Old City, which was carefully restored after incurring heavy damage during World War II. Opt to visit the European Solidarity Centre, a museum and library dedicated to Poland’s civil resistance movement that is located on the edge of the Gdansk Shipyards where the historic strikes occurred. Or enjoy a private performance of the works of Chopin and Grieg at the Polish Baltic Philharmonic. While in Gdansk, you’ll be joined on board by former Polish president and Nobel Peace Prize laureate Lech Walesa, who led the Solidarity movement against Poland’s communist leadership in the 1980s. Gain insight into his pivotal role in securing workers’ rights and bringing about the downfall of communism in Poland. (B,L,D)

Set at the western end of the Baltic Sea, the Danish island of Bornholm was a Viking stronghold before being passed between Hanseatic powers. Dock in Ronne and spend the day discovering the island’s picturesque coasts and rolling farmland. Immerse yourself in the charming village of Svaneke before an overview tour of the island’s sites. Or explore the ruins of the medieval Hammershus castle, perched precipitously on coastal cliffs. Meander through the fishing village of Allinge and visit one of its smokehouses to sample smoked herring with a cold beer. In seaside Gudhjem, watch glassblowers at work at the renowned Baltic Sea Glass workshop. Venture through lush forests to Østerlars, the oldest of the island’s unusual round churches. (B,L,D)

Disembark after breakfast and transfer to the airport for your onward flight. (B)