Situated at the crossroads of Europe and the Balkans, Croatia and Slovenia showcase charming towns and historic landmarks that reflect a blend of cultures, pristine parklands, and unspoiled coastlines, as well as many World Heritage sites.

Situated at the crossroads of Europe and the Balkans, Croatia and Slovenia showcase charming towns and historic landmarks that reflect a blend of cultures, pristine parklands, and unspoiled coastlines, as well as many World Heritage sites. 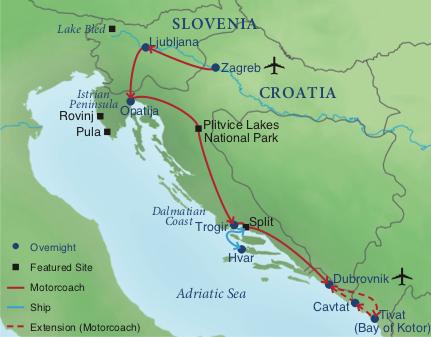 Situated along the exquisite Adriatic Sea and at the crossroads of Europe and the Balkans, Croatia and Slovenia showcase charming towns that reflect a blend of cultures, plus pristine parklands and coastlines, and many World Heritage sites.

Depart the U.S. and after a connecting flight in Europe arrive in Zagreb and transfer to your hotel. As guests’ arrival times may vary greatly, there are no group activities or meals planned for today.

This morning’s tour of the Croatian capital, by coach, and on foot, reveals a gracious city of culture and hospitality. Tour the city's Old Town, stopping off to see St. Stephen’s Cathedral and the colorful Dolac open-air market. You'll also visit Mirogoj Park Cemetery, known for its arcades and sculpture. Enjoy the remainder of the day at leisure. Tonight enjoy a welcome dinner  (B,D)

Departing by coach for the Slovenian capital of Ljubljana, arrive in time for lunch on your own. An afternoon walking tour reveals the charming heart of Ljubljana, a friendly, mid-sized European capital with a historic city center, ornate building façades, romantic bridges, and abundant parkland. Dine tonight at the hotel. (B,D)

Travel northwest this morning to the town of Bled, whose namesake lake is the stuff of fairytales. Surrounded by the Julian Alps and deep forests, and with a medieval castle perched on its shore, the almost mile-wide lake ranks as a popular destination. After touring the castle enjoy a boat ride around the scenic lake. Return to Ljubljana, where the rest of the day is at leisure. (B,L)

En route to Opatija, stop to explore Postojna Cave, the almost 13-mile-long karst cave system, where an electric train takes you deeper than is possible in any other cave in the world. Then, after free time here for lunch on your own, continue on to Opatija, the seaside resort where Habsburg princes once vacationed. Upon arrival, explore the “Opatija Riviera” on a walking tour of this modern-day resort town nestled between green forested hills and the cobalt Adriatic. Dine together tonight. (B,D)

Today’s tour of the Istrian Peninsula reveals the multicultural roots of this alluring spit of land jutting into the Adriatic. At various times a vassal of Venice, the first Austro-Hungarian Empire, Fascist Italy, the Yugoslav Federation, and finally, Croatia, Istra, as it is known, boasts an interesting history, mild Mediterranean climate, lovely scenery, and good wines. Your first stop is in the port of Pula, where you visit the well-preserved remains of a Roman amphitheater (c. 177 ce). Next is Rovinj, a charming old Venetian port where you are free to explore on your own and perhaps enjoy lunch at an outdoor café. After returning to Opatija late this afternoon, dine together tonight at a local restaurant. (B,D)

Explore the nearby Moscenicka, a one-time fishing village that now draws visitors to its tranquil port and beautiful pebble beaches. After lunch together, return to Opatija where the remainder of the day is at leisure amid the Belle-Epoque architecture and atmosphere. (B,L)

Travel south this morning for an excursion to Plitvice Lakes National Park. Famed for its string of 16 turquoise-colored lakes connected by a series of waterfalls and cascades, separated by distinctive travertine deposits, and surrounded by dense forests, Plitvice counts as one of UNESCO’s first natural sites and Croatia’s largest national park. Late afternoon depart for Trogir, arriving early this evening in time for dinner at the hotel. (B,L,D)

This morning travel to Split, the main city of the central Dalmatian Coast and home of 3rd-century Diocletian’s Palace. As you see on your guided tour, the palace, and eventually its ruins, formed the historic heart of picturesque Split. After time for lunch on your own, board a ferry for the two-hour cruise to Hvar, “queen” of the Dalmatian islands. Upon arrival, travel by coach to lively Hvar town, where you spend the next two nights. Dine tonight at a local restaurant just a short walk from the hotel. (B,D)

With captivating natural beauty and a strategic Adriatic location, Hvar has prospered since antiquity. Discover some of its charms this morning, first with a walking tour of Venetian-tinged Hvar town then with a walking tour of nearby Stari Grad, one of Croatia’s oldest cities and where you also have time to explore on your own. Enjoy lunch and a tasting at a local winery before returning to your hotel for an afternoon and evening at leisure. (B,L)

Continue your journey south today, leaving Hvar for the mainland then traveling along the scenic Dalmatian Coast to popular and beloved Dubrovnik. After reaching your hotel late afternoon, enjoy dinner there this evening. (B,D)

Today discover Dubrovnik's ancient walls, which have withstood both time and tide for hundreds of years. Begin with a walking tour around the city walls, whose original ramparts and bastions date to the 12th and 13th centuries. (Dubrovnik itself was founded in the 7th century.) Then continue through the Old City, paying a visit to the stately baroque cathedral (c. 1672). You also see the Treasury, whose gilded shelves and historic relics sit behind locked wooden doors, and the Franciscan monastery with its 14th-century pharmacy. Return to your hotel for an afternoon at leisure or time for independent exploration. (B)

Enjoy a day at leisure to explore the "Pearl of the Adriatic" according to your own interests. From the medieval Old Town to the contemporary city with its Mediterranean accent, Dubrovnik offers discoveries aplenty. Enjoy a small group highlight as you set out late this afternoon for a farewell dinner with a local family whose home overlooks Dubrovnik. The menu features produce from their garden, homemade olive oil, and local wine. (B,D)

This morning transfer to the airport for your return flights to the U.S. (B)