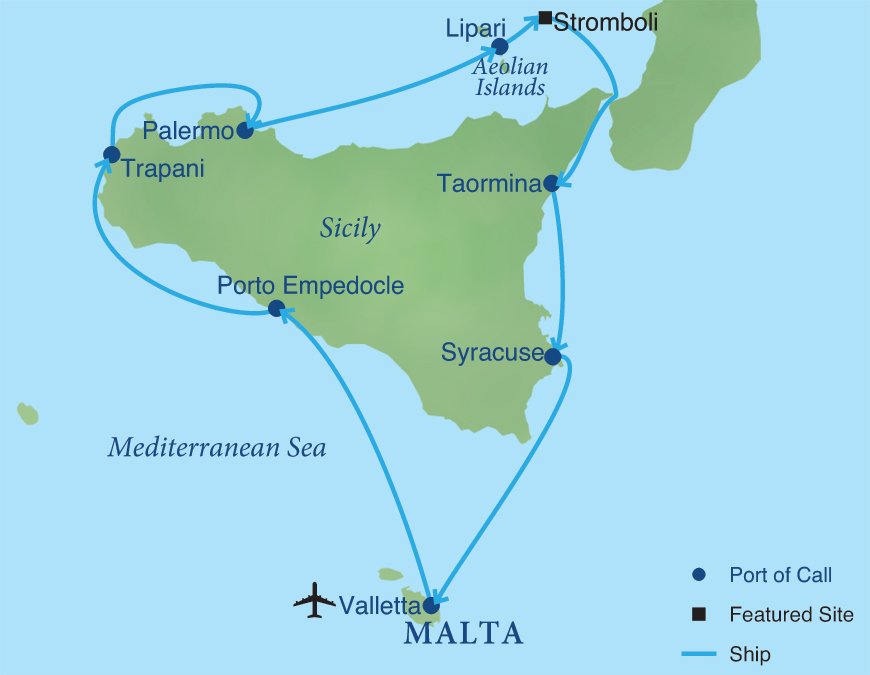 Ocean-going cruise that will involve embarkation and disembarkation at piers for shore excursions as well as boarding tenders and other landing craft for some activities. Days can be full, with activities starting as early as 8:00 am and lasting four or more hours. Many activities, such as walking tours, museum visits, and site visits, necessitate standing and walking for extended periods of time (two or more hours). Participants should be prepared to walk up to two miles per day, sometimes on uneven terrain, such as cobblestones in towns, ancient ruins, and unpaved trails; and to climb or descend stairs with or without handrails, as elevators will not always be available.

Your first stop in Sicily is Porto Empedocle on the southern coast. From here, travel inland to the World Heritage site of Agrigento, where seven ancient temples line a ridge in the Valley of the Temples. Step back into the 5th and 6th centuries B.C. as you tour the evocative site, which was once one of the most powerful cities in the Mediterranean. (B,L,D)

Anchor in Trapani and continue to the ancient city of Segesta to see its magnificent Doric temple, standing alone amid grassy slopes. Then journey into the hills to the beautiful village of Erice. Meander its medieval streets, taking in views that can reach as far as the North African coast on a clear day. Visit some of Erice’s many churches and see its two iconic castles. (B,L,D)

Spend today in Palermo, a city that still bears the vestiges of its many rulers, including the Carthagians, the Romans, the Arabs, and the Normans. Discover its unique Arab-Norman architecture, built at the height of the city’s prosperity in the 12th century and recognized as a World Heritage site. Admire the mosaics in the Norman cathedral, and visit the Capella Palatina in the sumptuous Norman Palace. Travel into the orchard-covered hills to see the spectacular Norman cathedral of Monreale. (B,L,D)

Just north of Sicily lie the Aeolian Islands, a volcanic archipelago where evidence of human habitation goes back to the Neolithic era. Go ashore on the main island of Lipari, and visit the Aeolian Archaeological Museum to see artifacts from many centuries found on the archipelago. In the evening, glide by the island of Stromboli where glowing lava can often be seen sliding down the slopes of an active volcano. (B,L,D)

Poised on the Ionian Sea against a backdrop of craggy headlands, beautiful Taormina has long drawn writers and philosophers to its piazzas and winding lanes. Discover the town on a guided walking tour and visit the Greek Theater, where live performances still take place today. Or travel to Mount Etna, another World Heritage site, and enjoy a tasting of local wines while enjoying views from its rugged slopes to the coast. (B,L,D)

Your final stop is Syracuse, an ancient city once so powerful it rivaled Athens and Rome. Follow in the steps of Aeschylus and Archimedes as you explore the archaeological park, which includes a Greek theater and one of the world’s largest Roman amphitheaters. See the Ear of Dionysius cave and stroll amid stunning architecture on the island of Ortigia. (B,L,D)

The Genius of Michelangelo