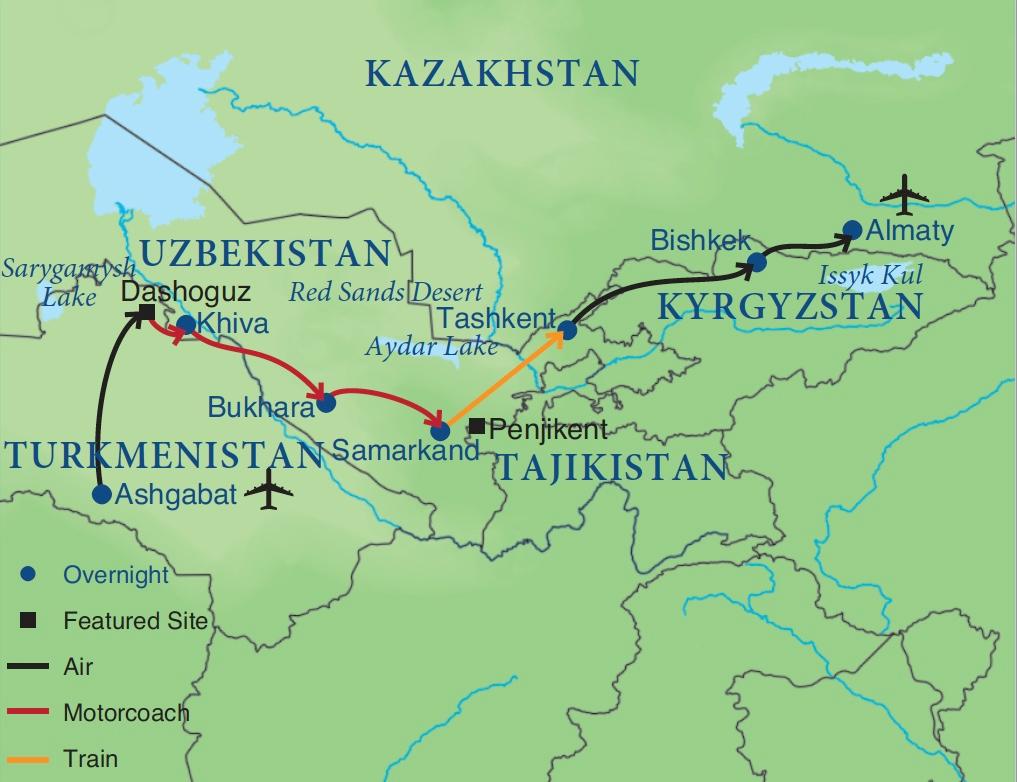 Central Asia is the exotic heart of the Silk Road, ancient caravan routes used for the silk and spice trade between East and West. Experience the past and present of five Central Asian countries as you explore legendary cities, visit religious sites and museums, attend cultural programs, and meet local experts.

Fly to Ashgabat, losing from 9 (East Coast) to 12 hours (West Coast). Arriving in Ashgabat in the early morning hours of day 3, transfer to the centrally located hotel for check in and rest.

Following a free morning at leisure, spend the afternoon on an introductory tour of Ashgabat. Highlights of today’s tour include the Monument of Neutrality, the fountains-cooled Independence Park, and the magnificent President Palace Square. Gather this evening with fellow travelers for a welcome dinner to celebrate the beginning of the journey. (B,D)

Continue to explore Ashgabat today with an archaeologist led visit to ancient Nisa, a visit to the National Museum of History and Ethnography, and a stop at the colorful Russian Bazaar. (B,L,D)

This morning check out and transfer to the airport for a flight to Dasoguz in the northern part of the country. On arrival, enjoy a short tour before driving across the border to the World Heritage designated city of Khiva, Uzbekistan. Dinner is served at the hotel this evening. (B,L,D)

Spend the day exploring Khiva on foot. Highlights include the Tash Hauli Palace, once the home of the khan and his four legal wives, and an open courtyard for enthroning the khans. Also see the 9th-century Dzhuma Mosque with an unusual wood ceiling and 115 carved wood columns, creating a forest-like effect. The khans had several residences, including the Tash Hauli Palace, but the Kunya Ark (Old Fortress) dates back to the 5th-century as the original residence. The view from the watchtower of the Kunya Ark encompasses an ensemble of architectural masterpieces. Over dinner, enjoy a colorful performance of Khorezmian music and dance. (B,L,D)

This morning, depart Khiva for Bukhara by train. The ride lies across long stretches of the Kyzyl Kum, or Red Sands Desert. This is the same route ridden by loaded Silk Road camel caravans and once plagued by brigands on hand to plunder their riches. The landscape is made up of dunes, saxaul bushes, and the distant mountains. Arrive in Bukhara in the afternoon and enjoy some time for independent exploration before dinner. (B,L,D)

Spend the day exploring Central Asia’s most ancient living city. The Old Town in Bukhara has a unified feel, drawn together by a central reflecting pool and plaza, by commonality in the structure of the domed bazaars and by the major monuments ringing the old town: the Kalon Assembly, the Zindan Prison, and the Ark Citadel. Enjoy an exclusive meeting with the Scientific Advisor of the Ark Citadel. Finish the day with a walk through Bukhara’s old Jewish Quarter, where in the mid 19th-century 2,500 families of prosperous merchants were estimated to have been living.

This evening, visit a local madrassah to dine and enjoy a performance by local artists. (B,L,D)

This morning after breakfast visit the Emir’s Summer Palace and the Bakhaudin Nakshbandi mausoleum complex before setting out for Samarkand in the afternoon. Check in to the hotel on arrival for dinner and overnight. (B,L,D)

Today explore glorious Samarkand. Begin at the Registan, Central Asia’s most noble square, which maintains the majesty that it has radiated through the ages. Three emblematic madrassahs frame the square and loom over the empty space in the center.  Visit Bibi Khanum Mosque, built by Tamerlane to be the largest mosque in the Islamic world. Wander the row of tombs and mausoleums collectively called Shah-i-Zinda, or “place of a living king,” stretching between the present and the past. Pay a visit to Ulug Bek’s Observatory, one of the most advanced observatories of the ancient world. Other highlights include the colorful bazaar, as well as the Gur-Emir Mausoleum, the final resting place of Tamerlane. Later, visit a workshop where handcrafted paper is made according to traditions handed down from the 8th-century, when paper-making began in Samarkand. This evening enjoy a performance by a local dance troupe. (B,L,D)

Today take a day trip to Penjikent in nearby Tajikistan. Penjikent, an isolated city of approximately 130,000, is most famous for its past. Here visit the site of an archaeological dig at Old Penjikent, where excavations began over 50 years ago, tour the remains of Shakristan, Zoroastrian temples, and the Citadel, and visit the Rudaki Museum of History and Regional Studies. Return to Samarkand in the afternoon and enjoy some free time at leisure before dinner at a private home. (B,L,D)

Continue to explore Samarkand with a visit to the workshop where handcrafted paper is made according to traditions handed down from the 8th-century, when paper-making began in Samarkand. Also stop at the Uzbek-Afghan Silk Carpet Factory, where you can observe the entire process of dying the thread and weaving the carpets, with an opportunity to shop afterwards. Over lunch, witness the demonstration of traditional Uzbek bread making. In the evening, take the express train to Tashkent. Dinner this evening is served late at our hotel. (B,L,D)

Spend the day exploring Tashkent. Take a drive past some of the city’s main landmarks, including Independence Square, Shahid Memorial Complex and Courage Monument. In Tashkent's Old Town with its winding streets, mudbrick buildings and Middle Eastern feel. A visit to Old Tashkent begins with a stroll through Khast Imam Square, where some of Tashkent’s oldest monuments remain.  The 16th-century Kaffal Shashi Mausoleum, the tomb of one of the first imams of the Muslim world, and Barak-Khan Madrassah, also 16th-century, are flanked by the 19th-century al-Bukhari Madrassah and the early 20th-century Tillya Sheikh Mosque, which houses the oldest Koran in the world. After lunch, browse the Museum of Applied Arts, its interior decorated by artisans from Samarkand, Bukhara, and Fergana, featuring the painted carved plaster called ganche, carved wood, and tile work.  Exhibits include the Uzbek embroidered wall coverings called suzani, ceramics, jewelry, rugs, and musical instruments. Transfer to the airport for the late afternoon flight to Bishkek, Kyrgyzstan.  Upon arrival, transfer to the city center for check into the hotel.

This morning, travel approximately 80 km outside the city to see the Burana Tower and the small nearby museum with its collection of ancient bal-bals, carved stone figures used as monuments.  Lunch today is at the private home of a local family in Tokmak village.  Enjoy the opportunity to meet the host and hostess and sample traditional Kyrgyz dishes.  Following lunch, attend a demonstration of Kyrgyz horse games, such as Ulak Tartysh, a sort of polo played with a goat carcass, and Kurosh, which is wrestling on horseback. This evening, enjoy dinner accompanied by a Kyrgyz Manas folk performance at a local restaurant. (B,L,D)

After breakfast at the hotel, continue touring Bishkek. Visit the State Museum of Fine Arts, focusing on art created during the Soviet period, the collection consists of more than 15,000 paintings, sculptures, and decorative pieces. Meet with a resident Kyrgyz individual who participated in the April 7, 2010 revolution and together visit the “Ata-Beiit” Memorial complex on the outskirts of Bishkek to pay respects to the fallen Kyrgyz heroes and leaders from ancient times to the modern times who have been laid to rest. At the end of the day, transfer to the airport for the short evening flight to the former capital of Kazakhstan, Almaty. Spread out at the foothills of the Zaili Alatau Mountains in the Tien Shan range, Almaty is the largest city in Central Asia’s richest country, Kazakhstan. Present-day Almaty sits on the site of an old Silk Road oasis town called Almatu; laid waste by the Mongols in 1211, the city left no ancient remains. Almaty’s name means “the place with apples,” and the many varieties of wild apple in the vicinity give scientists reason to believe that this is where apples were first domesticated. Dinner this evening is served at a local restaurant. (B,L, in lieu of dinner this evening, all pax receive $50 credit towards hotel services at Intercontinental Hotel)

A tour of Kazakhstan’s largest city begins with a visit to the traditional Kazakh falcon farm, where hunters on horseback wearing national costumes will give an exclusive demonstration of how the beautiful birds are used for hunting. Later, visit Panfilov Park with its Zenkov Cathedral, a wooden Orthodox church built at the turn of the century without the use of nails. At the delightful Museum of Musical Instruments, enjoy a short performance. Tour the State Central Museum, a history museum with exhibits that detail the development of Kazakhstan and its people from the Bronze Age through the Russian Empire, the Communist Period and the present day. Visit Kok-Tobe, a 3,800-foot hill on the outskirts of Almaty with an aerial tramway leading to a recreation area at the top. Raise a toast to the end of our journey at a festive farewell dinner. (B,L,D)

The tour concludes with an early morning transfer to the airport for international departures. (B flight times permitting)