Uncover layers of history as you cruise to the islands of the central Mediterranean—Malta, Sicily, Sardinia, Corsica, and Elba—encountering Greco-Roman treasures, medieval fortresses, and Napoleon’s villa in exile.

Uncover layers of history as you cruise to the islands of the central Mediterranean—Malta, Sicily, Sardinia, Corsica, and Elba—encountering Greco-Roman treasures, medieval fortresses, and Napoleon’s villa in exile. 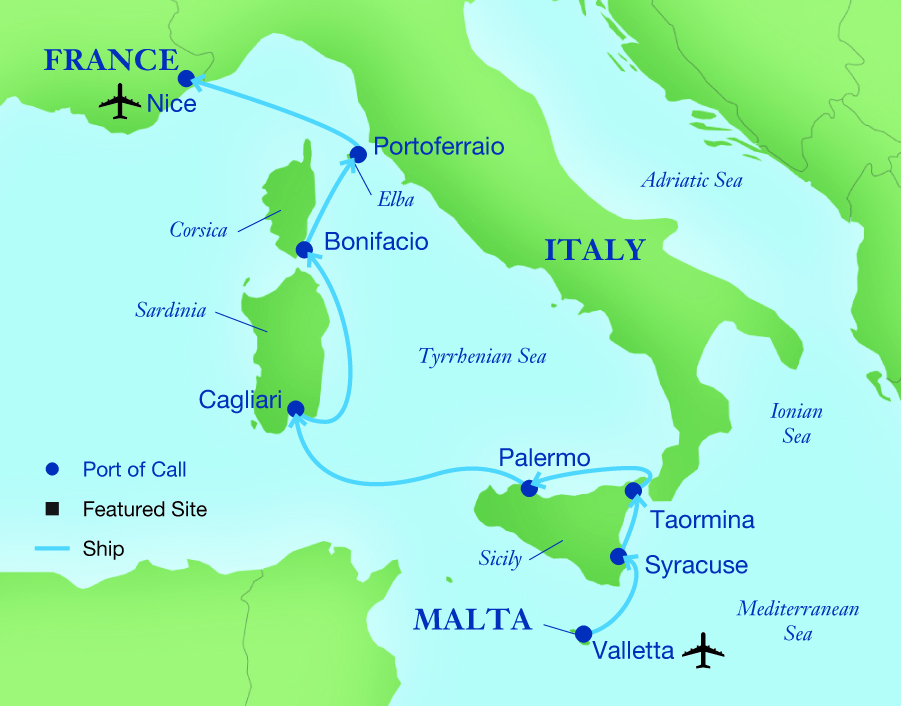 Step through the centuries on a voyage to the Mediterranean islands of Italy and France, exploring the temples of the ancient Greeks in Sicily, Napoleon’s elegant villa-in-exile on Elba, and the lively harbor towns of Taormina and Cagliari. Make three stops in glorious Sicily, encountering a wealth of World Heritage sites including the archaeological finds of Syracuse, Mount Etna, and Palermo’s unique Arab-Norman palaces. Then sail on to Sardinia, Corsica, and Elba to discover vestiges of history amid the rugged beauty of these unique islands.

Arrive in the World Heritage site of Valletta and board the ship. Take in the views as you cruise out of the city’s spectacular harbor. (D)

Cruise north to Sicily, where your first port of call is Syracuse, founded in 732 B.C. by the Corinthians and an important Mediterranean city for some 500 years. Follow in the steps of Aeschylus and Archimedes as you explore the archaeological park, which includes a Greek theater and one of the world’s largest Roman amphitheaters. Venture into the Ear of Dionysius, a cave that allowed the tyrant Dionysus to eavesdrop on his prisoners, and see Greco-Roman artifacts at the Paolo Orsi Archaeological Museum. Alternatively, visit the World Heritage site of Noto, an excellent example of Sicilian baroque architecture and 18th-century urban planning. Stop for a gelato or a granita before returning to the ship. In the afternoon, visit the World Heritage-listed island of Ortigia, and delve into its mythology and history as you explore its Duomo and the legend-infused Fountain of Arethusa.  (B,L,D)

Tucked into the rugged coast with Mount Etna as a backdrop, charming Taormina was once the capital of Byzantine Sicily. Discover the town’s cathedral and the Palazzo Corvaja on a guided walking tour and visit the Greek Theater, where live performances still take place today. If you wish, take a longer tour of Taormina that includes an excursion to the hilltop village of Castelmola, built around an ancient fortress overlooking the city. Or journey to Mount Etna, a World Heritage site, passing through traditional towns and villages.  Take a look inside Etna’s inactive volcanic craters before heading to a mountainside winery for a tasting tour and a typical Sicilian lunch. (B,L,D)

Anchor off Palermo and spend the day discovering the city’s eclectic cultural heritage, which blends influences of the Carthagians, the Romans, the Arabs, and the Normans. Learn about its unique Arab-Norman architecture, which flourished at the height of the city’s prosperity in the 12th century and is recognized as a World Heritage site. Admire the mosaics in the Norman cathedral, visit the Capella Palatina in the Norman Palace, then travel into the countryside to see the spectacular Norman cathedral of Monreale. Or visit the Arab-Norman Palazzo Conte Federico and take a stroll through the open-air market to soak up the ambiance of everyday life. You may instead choose an excursion to the medieval port town of Cefalù where a walking tour includes the Cathedral, covered in splendid painting and gold mosaics, and the excavations of Osterio Magno. (B,L,D)

Sail into the harbor at Cagliari at midday and set out to tour Sardinia’s rose-colored capital city. Stroll through wide piazzas bordered by baroque palazzi and churches, and ascend to the impressive hilltop fortress. Take in views from Monte Urpino, then journey to ancient Nora, once a thriving port under the Carthaginians and the Romans. On a tour of the remarkable ruins here, some of which are now submerged, learn about the innovative waterworks and drainage system designed thousands of years ago. (B,L,D)

At the southern tip of Corsica lies the fortress town of Bonifacio, perched on cliffs high above the sea. Take an overview tour of the historic center by private mini-train. Then set off on foot into the labyrinthine streets of the medieval Citadel, visiting historic landmarks along the way. Stop at the old market where a viewpoint atop 230-foot-high cliffs offers panoramic views. Or choose to ride a local boat along the coast to Lavezzi Island, exploring magnificent grottos and coves that draw the turquoise seas deep into dramatically eroded limestone cliffs. (B,L,D)

Trace European history from the Renaissance to Napoleon on the rugged island of Elba, just over six miles off the Tuscan coast. Dock in Portoferraio and visit the fortress erected by the Medici family as well as a theater built by Napoleon during his brief exile on the island. Continue to Napoleon’s villa and enjoy a chance to explore the emperor’s apartments and gardens, which he escaped after a mere nine months. Then travel through stunning scenery to a traditional wine farm to sample local wines, cheeses, and charcuteries. Alternatively, take a beautiful drive across Elba to visit Ottone Botanical Garden. (B,L,D)

Disembark in Nice and extend your stay in the south of France or transfer to the airport for your flight home. (B)