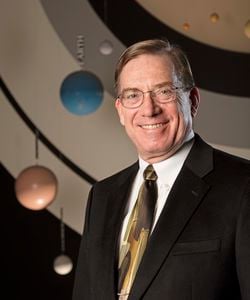 Steven H. Williams is an expert in Solar System science, with a B.A. in Physics (Cornell) and an M.S. and Ph.D. in Geology (Planetary) from Arizona State.  He has considerable experience in Mars analog laboratory work, and fieldwork in numerous locations in the American Southwest and even Antarctica.  He is particularly skilled in the creation and delivery of educational programming for all ages and backgrounds, making complex scientific topics understandable to any audience.  He held a number of posts in his fifteen years at the National Air and Space Museum (NASM), including Chair of the Education Department.  He created, managed, and delivered a wide variety of programs, hosted live Planetarium shows, played a key role in the creation of several award-winning educational videos, and contributed significantly to the design and content of the new Exploring the Planets gallery.

While at NASM, Dr. Williams was recruited by NASA to serve a two-year detail assignment at NASA HQ, where he created and delivered a number of outreach programs and products for launches, landings, science conferences, and other events.  He created the database for NASA’s SPACE365 app, which links Space exploration milestones with their historical setting, and the definitive Mars exploration “batting average” spreadsheet, showcasing just how difficult Mars exploration has been.

Solar Eclipse 2024: A Journey from Austin to the Texas Hill Country