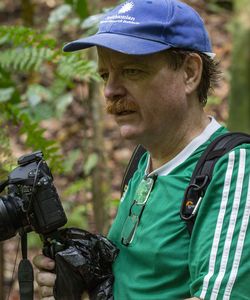 Steven Paton is an expert in monitoring the climate and oceans of the tropics, a wildlife photographer and a science communicator. He has spent over 30 years in Panama working with the Smithsonian Tropical Research Institute (STRI).

Steven arrived in Panama after graduating with a masters degree in zoology from the University of British Columbia, Canada. With a brief two-year interruption spent at the Charles Darwin Research Station in the Gálapagos Islands, he has worked at STRI throughout his career. His work includes managing STRI’s long-term climate and physical oceanographic monitoring programs, documenting Panama’s amazing biodiversity, and studying the impacts of severe drought on mangroves. The results of his efforts have been used by thousands of researchers from all over the world and appeared in hundreds of publications.

Steven is also a widely respected nature photographer. His photographs, which he makes freely available to everyone, are helping to document and promote Panama’s amazing biodiversity.

Over the last decade, he has become one of the STRI’s most popular science communicators. His talks on global climate change, tropical weather, and the El Niño/La Niña cycle have reached thousands of people. His role as one of STRI’s most popular scientific communicators has led him to give dozens of talks to both local Panamanian and international audiences, in both English and Spanish. His ability to bridge the gap between highly technical scientific topics and the general public is greatly appreciated by his audiences.