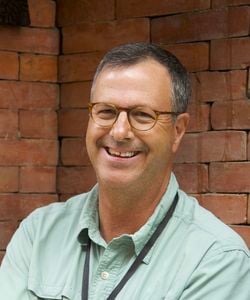 Kirt Kempter is a Fulbright Fellow and Ph.D. graduate from the University of Texas at Austin, where he conducted his dissertation research on Rincón de la Vieja volcano in Costa Rica. For the past 11 years, Kirt has worked for the New Mexico STATEMAP program, studying the geologic history of northern New Mexico. Kirt is also an instructor for the NASA astronaut training program, teaching NASA's 2009 astronaut candidates geologic mapping techniques in northern New Mexico. Since 1993, Kirt has led numerous journeys for the Smithsonian Institution, from Iceland to Antarctica.

Kirt was very knowledgeable, open, and approachable. He welcomed and answered all of our questions and his lectures were excellent (with great visual aides).  I would love to travel with him again!

Dr. Kempter is the consummate professor who knows how to impart knowledge in a very understandable manner.

Kirt's talks were extremely informative. His sparkling personality added to the experience too!

Q: You've been leading Smithsonian journeys to Iceland for many years. What is it about the country that draws you back again and again?

A: I am drawn to Iceland on many levels, and I still look forward to each return visit. From a geological perspective, Iceland is truly unique in our world—it's a virgin land representing the birth of the North American and Eurasian plates; a growing volcanic island dramatically sculpted by the Ice Age; and a somewhat Tolkien landscape speckled with volcanic cones, craggy mountains, lava flows, and seemingly endless streams and waterfalls. Then there is the human side, which is equally unique. Icelanders are tremendously visionary in their efforts to maintain a balance between technology and the environment. They utilize geothermal power better than any country in the world. And they are strongly committed to keeping their air and water pristine—in fact, the capitol city Reykjavik is already using hydrogen fuel technology to run city buses. Their early history, documented in numerous sagas, is a compelling story of Norse immigrants and their struggle for existence in a harsh land. The list of attractions could go on and on, and I haven't even mentioned the horses!

Q: You just returned from leading a Smithsonian trip to Iceland in July. Did you see or learn anything new this time around?

A: Yes, on this trip we returned to the glacier Solheimajokull, a glacier that I had not visited for the last five years. Although I knew this glacier was retreating (along with over 80% of Iceland's glaciers), I was truly stunned by how far back this particular glacier had moved in just a few years. The old parking lot, once near the glacier, was now abandoned and a new road and parking lot are now located more than one quarter mile farther up the valley. Global warming is clearly evident in Iceland, and many Icelandic scientists are conducting studies to help define prehistoric climatic variations and how much the current warming trend might be related to a human, industrial component.

Q: Many people would be surprised to learn that there is volcanic activity on Iceland. As someone who has conducted a lot of research on volcanoes all over the world, can you describe what happens when a volcano erupts from underneath a glacier?

A: As you might guess, the mix of fire and ice can be very dramatic! In fact, the most active volcano in Iceland, Grimsvatn, is currently beneath the largest glacier, Vatnajokull, and once every decade or so, this volcano becomes active, melting tremendous amounts of ice, thus forming subglacial lakes that temporarily remain trapped between land and ice. And once this water begins to find a way out, a catastrophic flood ensues, often taking out parts of the coastal highway, bridges, and power lines. For this reason, Icelanders keep parts of the southern coast unpopulated, knowing the frequency and violence of these flooding events.

Q: The trips to Iceland Smithsonian is currently offering include several days in the northern part of the country, which is not always featured in group travel itineraries. What do you find special about that particular region?

A: The north of Iceland is very different from the south, especially its climate, which tends to be colder and drier. The coastal landscape is defined by broad fjords—Ice Age glacial valleys now flooded by the sea. The Smithsonian tour stops in Akureyri, a beautiful village situated along a fjord coastline. The people of Akureyri are very proud of their homes and city, and many elaborate gardens are on display throughout the summer. We also visit the area of Myvatn, one of the most active ecologic and geothermal areas of Iceland. A lava flow 2,000 years ago dammed the Laxá river, forming Lake Myvatn, an impressive bird and wildlife refuge. Besides amazing volcanic features, we also visit Dettifoss, one of Iceland's most impressive and powerful waterfalls.

Q: Like you mentioned earlier, Icelanders are very progressive in their views about energy conservation and using alternative energy sources. Do you think the country's geography has affected public consciousness in these matters?

A: Yes, and in general I think Iceland's global isolation has always driven its population to be very independent. Their harnessing of geothermal energy is manifested in over 90% of homes and buildings that are geothermally heated. They do not want to be dependent on foreign oil and gas. And as I mentioned earlier, they are pioneering hydrogen fuel technology and currently powering many of their city buses with this alternative energy source. I think that living in a small country with a difficult climate and one that is so geologically active (on average one volcanic eruption every four years!) has made the people of Iceland survivors—hardy in mind and body. Through modern media they see many of the energy problems facing other countries, and they feel that they are better served finding their own energy solutions rather than adopting the global status quo.

Q: In addition to being an accomplished geologist, you're also a talented photographer. What subjects do you prefer to shoot in Iceland?

A: As a great appreciator of landscapes, geologic formations, and vistas, I always make good use of my camera each time I am in Iceland. While many photographers focus on the birds and the waterfalls, I am particularly drawn to the rock textures and shapes that are so unique to Iceland: vast fields of broken, black lava; spectacular columnar basalt or fan-shaped pahoehoe; and beach coves filled with sea-churned cobbles and rounded boulders. Each time I visit I try to take different photographs from different perspectives, though the subject matter often stays the same. Undoubtedly, Iceland's strange landscape and rocks are helping me become a better photographer.