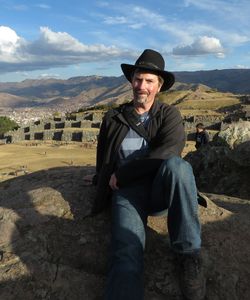 Dennis Ogburn is an archaeologist who specializes in the study of the Inca Empire and other ancient societies in Andean South America. A native of North Carolina, he went west to attend college at Rice University before moving even further west to earn his MA and PhD at the University of California, Santa Barbara. Subsequently, he worked at the Archaeological Research Facility at the University of California, Berkeley, then moved back east, where he is now Associate Professor in the Department of Anthropology at the University of North Carolina at Charlotte. He has been active in fieldwork and research in Andean archaeology for over 20 years, leading or participating in work in the southern and northern highlands of Ecuador and in the Cuzco, Ayacucho, and Nasca regions of Peru. His research is at the intersection of science and history, as he employs scientific techniques such as geochemical sourcing and radiocarbon dating in combination with the analysis of historical documents. He has written a number of scholarly works, including articles in prominent journals such as Latin American Antiquity, Ethnohistory, and the Journal of Archaeological Science, and a co-edited volume Foundations of Power in the Prehispanic Andes, published by the American Anthropological Association. Topics of some of those publications include the scope of warfare in the Inca Empire, the long‐distance movement of large building stones in the Inca Empire, and the Inca conquest and occupation of highland Ecuador. In recent and on-going projects, he has been investigating the interpretation of quipus (the Inca writing system), the origins of Inca building stones in the Cuzco region, and the contents of drinking vessels from the Peruvian coast. At UNC Charlotte, he regularly teaches courses in archaeology and related subjects, including South American Archaeology and Ethnohistory of New World Peoples. In addition to a general affinity for old things, his interests include playing guitar, hiking, bicycling, collecting rocks, and learning about native plants and animals.