A Smithsonian Journeys expedition to Costa Rica is like a birthday party: you know you’ll get gifts, but you don’t know what. You can guess some gifts from the itinerary, but the best ones are the surprises—the unexpected encounters, the memorable experiences.

People. The camaraderie of our groups is always a gift: It’s a pleasure to meet travelers, who, no matter what their backgrounds and reasons for choosing a Smithsonian trip, inevitably form a cohesive and communal group. The enthusiasm of fellow travelers is contagious and enriches all of us. But nothing matches the welcoming smiles and friendliness of the Costa Ricans themselves. 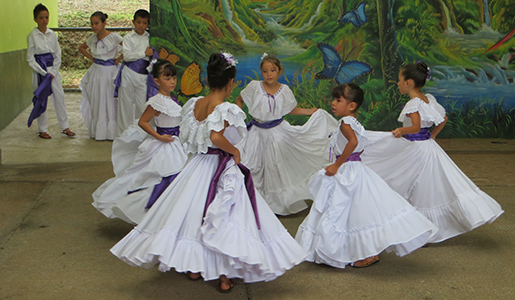 Visits to a local school are a highlight of our travels in Costa Rica.

Places. Two volcanoes have star billing on our Costa Rican itinerary, yet both can be hard to see as clouds swirl up their slopes and around their peaks. But in February 2013, we had clear skies from horizon to horizon and got a spectacular view inside the caldera of Poas Volcano.  This was the first time in eight trips that I saw Poas in full splendor. Wow! What a gift! 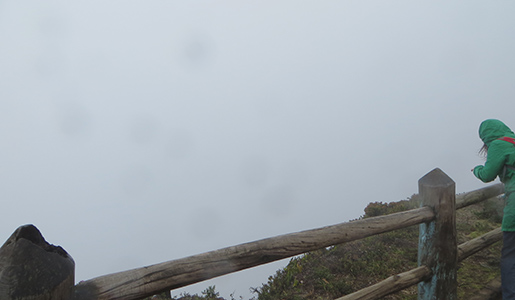 Fog characteristic of cloud forests often partially or, as in this case, completed obscures the volcanic caldera of Poas Volcano only a few hundred feet away. March 15, 2013. Photo by Jim Karr. 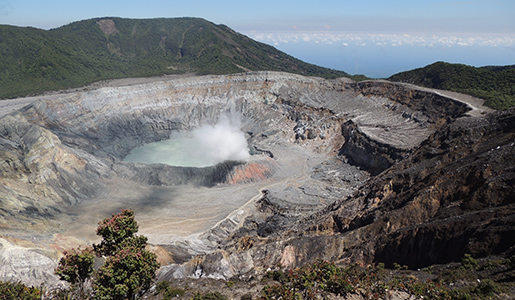 As we travel, we crisscross the Continental Divide, the ridgeline splitting rainfall flowing to the Caribbean from rain flowing to the Pacific. The scenery is magnificent, with forests—often protected in national parks and reserves—giving way to cattle ranches and farms growing bananas, plantain, pineapple, coffee, sugar cane, mangos, and more. The last days of our trip, we walk a sheltered Pacific Coast beach, feeling relaxed, meditative. 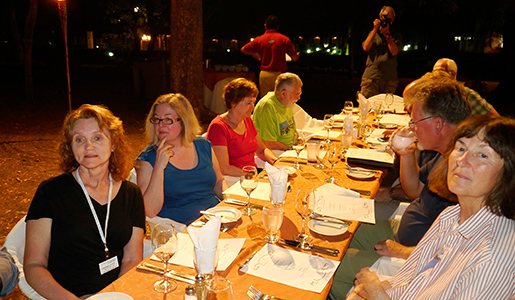 A special dinner on the beach during our last night at the Hotel Casa Conde del Mar. March 232, 2013. Photo by Edward Getley.

Plants and Animals. The multicolored splendor of flowering trees in the tropics is rarely matched in any temperate forest. And when the fruits ripen, we find many mammals and birds lured to the fruiting tree. White-faced and howler monkey troops travel along treetop highways, seeking food, defending territories, and watching over their young. 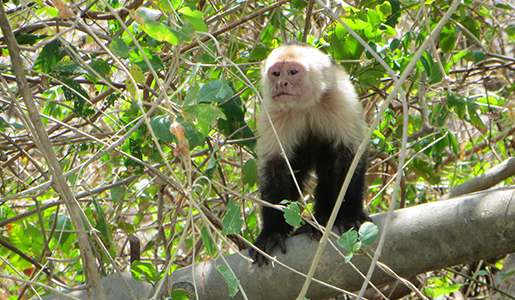 A curious white-faced monkey encountered during a boat trip on the Tempisque River. March 22, 2013. Photo by Jim Karr.

Our daily bird walks usually produce a group list of 140 to 160 species. The resplendent quetzal, a species considered one of the world’s most beautiful birds, is a must-see for many traveling with us, and we are often lucky enough to find one. Sometimes, we’ll also spot the tiny six-inch ferruginous pygmy owl, which hunts insects at dawn and dusk, and hummingbirds feeding their young in the nest. 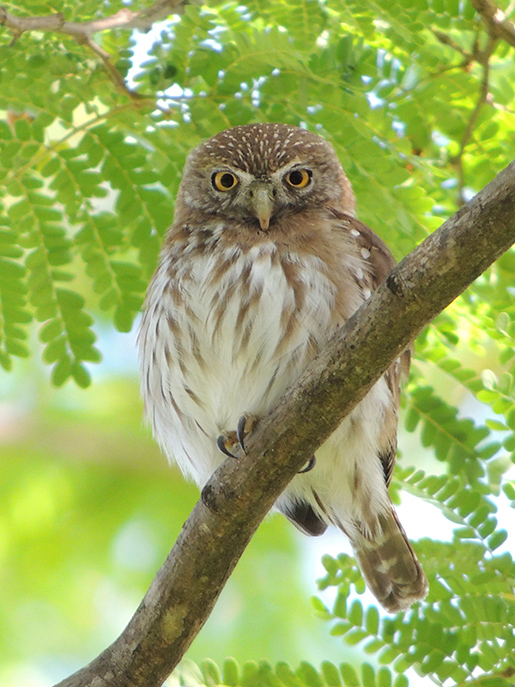 A ferruginous pygmy owl forages in the trees on the grounds of the Hotel Casa Conde del Mar. February 22, 2013. Photo by Jim Karr.

We rarely see snakes, but the five-to-six-inch orange-kneed tarantula sometimes startles us. 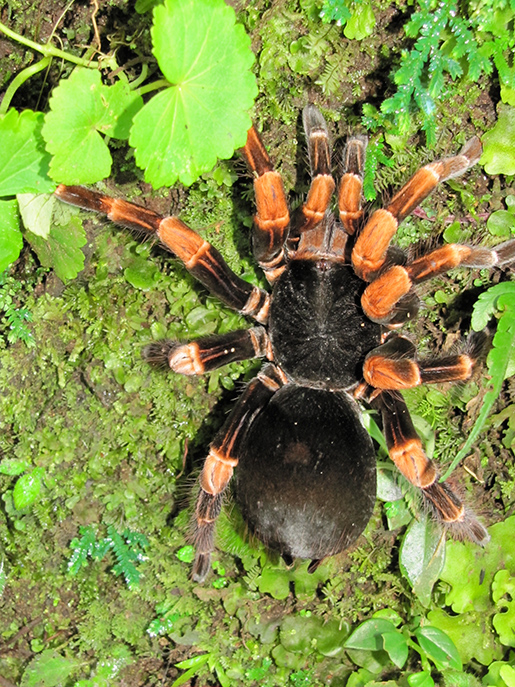 An orange-kneed tarantula observed on a night walk at Monteverde. March 21, 2013. Photo by Jim Karr.

Experiences. Some of our most memorable events are serendipitous. Once, a restaurant lunch stop led to an invitation to visit a server’s relative, who was harvesting a local palm wine, and  we were treated to an impromptu wine tasting. 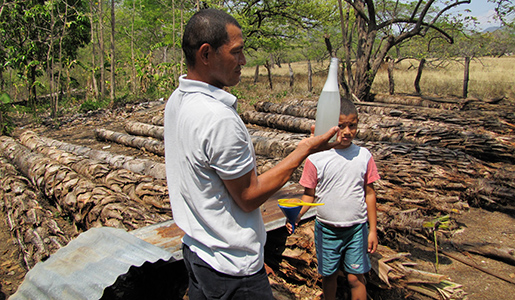 A Costa Rican farmer and his son filter and bottle palm wine collected from the trunks of palm trees. March 31, 2013. Photo by Jim Karr.

Another time, our tour director invited us to his family home, where the garden overflowed with 800 species of orchids. We met his family,  including his grandfather, who, at more than 100 years of age, tends the orchids every day. 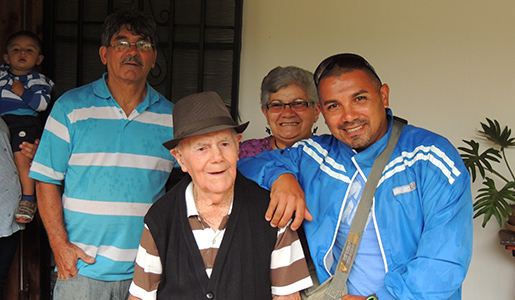 Orchid expert and tour director Randall Obsney (right) with his parents and grandfather at the family home and orchid garden. February 15, 2013. Photo by Jim Karr.

Then, pausing in a shelter to avoid an afternoon downpour, we found a gift of artwork: motorbike tires crafted into toucans! 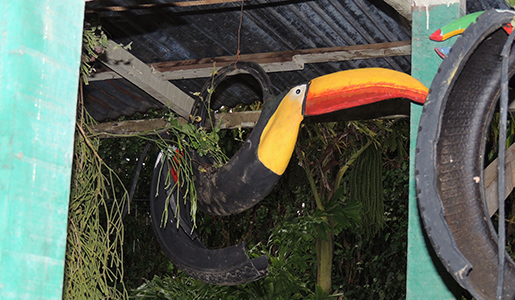 Each trip gives new gifts to everyone, not least of which is the chance to share them with fellow Smithsonian Journeys travelers.

To learn more about out our Costa Rica’s Natural Treasures tour click here.