“Produits du Terroir”: In France, Both Food and Architecture Stem from the Soil 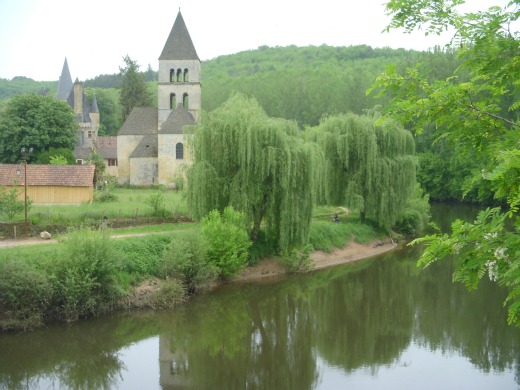 French countryside. (Photo by the author.)

I first went to France as a student long ago to study art at the Musée du Louvre. During that summer, I practiced my French, explored Paris as well as the adjacent countryside, and savored the freshness, flavor, and diversity of the food available in local markets. Subsequent visits took me to distant corners of this endlessly varied nation. When I return to France now, familiarity quickens my stride. Anticipation of the variety that awaits me, diverse treats for both sight and taste, precedes the pleasure of fulfillment.

On this trip, our Tour Director talked about the way in which the French express the significance of the local landscape wherever one might be. The word "terroir" conveys the notion that multiple aspects of a region’s identity are profoundly rooted in the nature of the local soil. Agricultural products in particular acquire their distinctive flavors from the mineral composition and drainage of the land in or on which they are grown. Animals grazing on grasses in one region produce milk or meat with different qualities from those that are raised elsewhere. Cheeses, butter, lamb and pork (not to mention wine) differ because of the environments in which they are cultivated. Their unique qualities allow them to be celebrated in markets and shops throughout the French countryside (and, for the benefit of tourists, at airports) as "produits du terroir": foods that are inherently, implicitly, and incontrovertibly regional specialitiés and are incapable of imitation.

Geological features also engender the characteristics of buildings. In addition to the matter of topographical setting, the texture and color of material that is locally quarried determines critical aesthetic and structural issues. The relative softness of limestone elicits fine chiseling and enables subtle sculpting; the dark coarseness of volcanic tufa projects a rugged profile of defense; marble evokes lustrous magnificence. The materials used in the construction and embellishment of churches, walls, and castles identified for pilgrims long ago the distinctive qualities of patronage and protection that might be found in a particular Count or King’s domain. In times gone by, buildings bore witness to specific regional definition; like Camembert and paté, they were, in an equally profound sense, "produits du terroir."

Architectural monuments continue to express the diversity of the ground from which they derive their distinctive features, even as the passage of time and efforts at preservation may have altered their appearance. This notion of the specificity of locale, which underpins my delight in the French countryside, repeatedly rewards my return to places I’ve visited and “feasted” on before. How perfect then to find on this recent trip, just around the bend from a tiny twelfth-century limestone church in the village of St-Léonard-sur-Vezère, a grocery van advertising local specialitiés of the table.

A depiction of one of Edouard Manet’s celebrated paintings in the Musée d’Orsay was painted on the vehicle’s side. In it, three figures relax in the woods next to the ingredients of an informal lunch that are arrayed on a cloth on the ground. The title of the painting, which translates as "Luncheon on the Grass," was appropriated by the purveyor for the name of his concern; it was accompanied by the words "produits du terroir" – indication that the sausages, crudités, cheeses, and wines that it sold had been grown and made locally – and were suitable for a picnic!

In this tiny village in the Dordogne, art and food, my longtime, ever faithful companions of the road, were, in an instant, incongruously yet memorably conjoined. 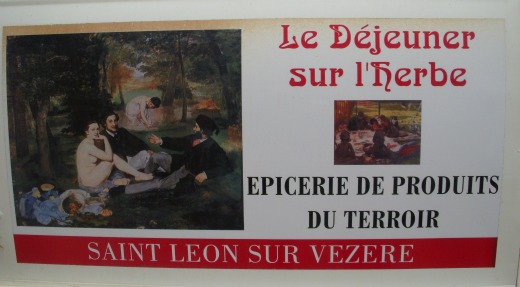 A grocery van outside the village of St-Léonard-sur-Vezère. (Photo by the author.)

Read more about Journeys' upcoming "France Through the Ages" departures, and check out Linda's upcoming trips.