Color and Chaos on the Banks of the Ganges

Varanasi, the final destination of the Mystical India trip is one place on earth that cannot fail to move you. Love it or hate it, this city will leave its mark on you. A city that goes by several names, Varanasi, Benaras or Kashi, this site is believed to be the oldest continually inhabited place on the planet. Varanasi may be one of the most ancient cities in the world—but do not come here looking for old buildings or ancient ruins —you will be disappointed. Varanasi is all about ambiance, atmosphere, a certain mood, a vibe and the settings.

The ghats—the steps that lead down to the river—are the centers of life and action in Varanasi. And the river here is no ordinary river; it's none other than Mother Ganges herself—the life-giving river, the holy river in which devout Hindus come to bathe and wash away their sins.

Along the ghat, one can see life play out in many ways. There are ghats where people come for bathing or a ritual dip in the river, for prayer ceremonies, for yoga, for religious training, for meditation and mindfulness. There are even ghats for washermen (dhobis) to ply their trade, washing all the dirty linen in the river. But most powerful are the burning ghats where Hindus are cremated. For devout Hindus, to die in Varanasi and to be cremated on the banks of the Ganga, with the ashes offered to the river is to achieve "moksha" or liberation from the continuous cycle of birth, death and rebirth.

The winding and crowded city streets of Varanasi are no less action-packed. Every day is a celebration in this City of Light, the city that belongs to Lord Shiva, the powerful Hindu God of Destruction. To get to the ghats for our evening boat-ride on the River Ganges is a full-on sensory experience. We take our final rickshaw ride here–the streets are crowded, colorful and virtually a cacophony of people, animals, vehicles of all sorts, some with powerful horns which they do not hesitate to use.

No words are adequate to describe this ride—it has to be experienced to be believed. You feel your eyes cannot take in the color and chaos any more; your ears begin to feel sound, going beyond hearing; your nose is beguiled by the scents and the dust. It is one of the most exhilarating rides of your life. Suddenly, the rickshaw stops and you have to walk—your being is jostled by the crowd heading to the same place—the ghats. You are safe, you belong here, you are part of a larger whole, alive like you have never felt before.

A few minutes later or perhaps an eternity it seems, you reach the ghats where there are scores of people milling around, getting ready for the evening aarti (fire worship) ceremony. There is such fervor in the air, yet a sense of calmness pervades—instantly the clamor of the city streets is forgotten.

You make your journey down the steps to the river where the boatman is waiting, the journey on the river akin to the journey of life—from life to death to celebration. But that tale will have to wait for another time. It is time to let the ghats of Varanasi get under your skin. 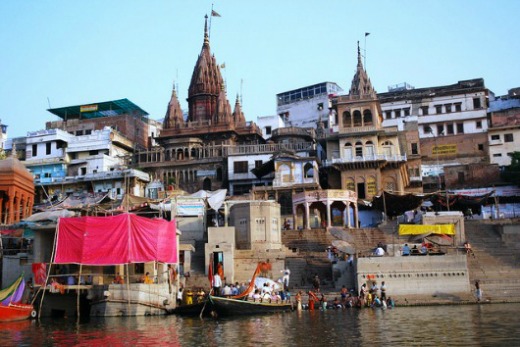 Ghats along the Ganges River in Varanasi. (Photo courtesy of Flickr user ruffin_ready.) 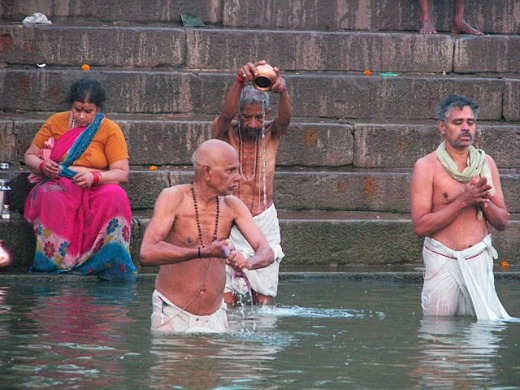 Practicing Surya Pranam at the Ganges in Varanasi. (Photo by Sadie McVicker.) 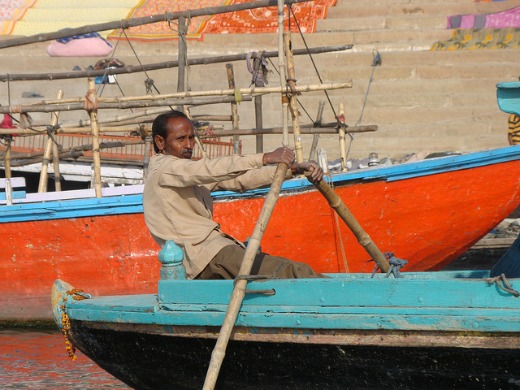 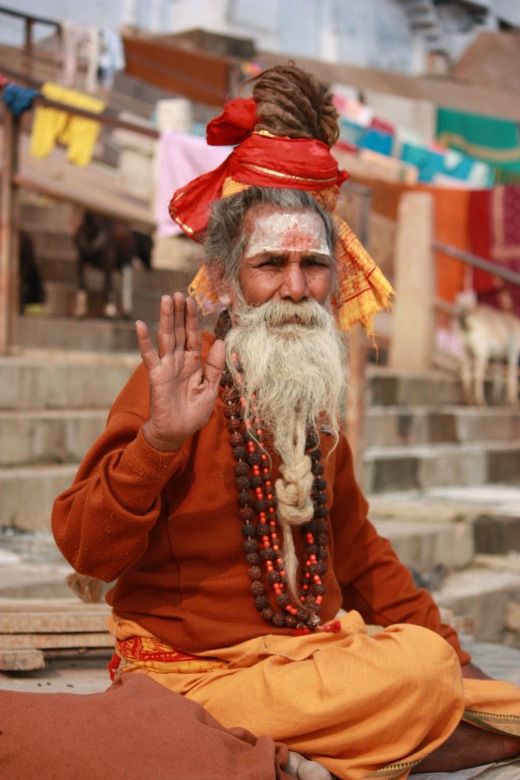 Man sitting on the banks of the Ganges. (Photo courtesy of Flickr user Arian Zwegers.) 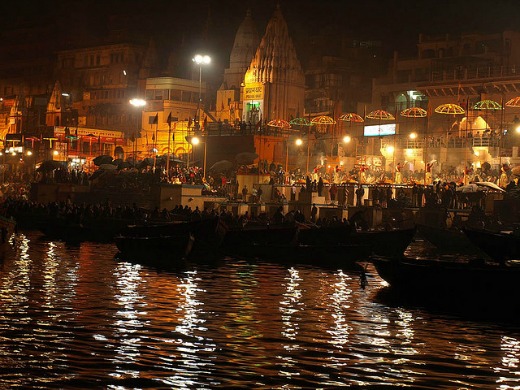 Check out the "Mystical India" tour page for more information on Minhazz's next trip.