On the Tiger Trail in India’s Ranthambore National Park 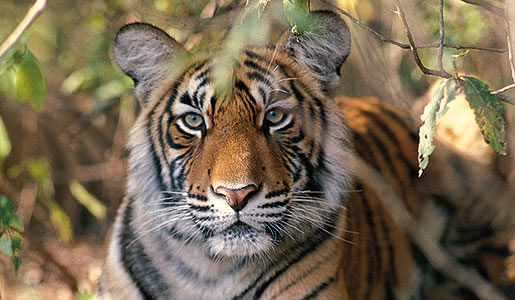 Tigers have been venerated in India since ancient times. Photo: India Tourism Board

To look into the eyes of a tigress is a wonderful, truly mystical experience. For that instant, the elemental beast and you are one in soul and spirit, the tawny eyes staring deep into your very being. You are enraptured, unable to break your gaze, so totally in the moment. You are intensely aware of even a blade of grass moving, of the leaves falling around you, of the wild bird’s call. Yet, she has you enthralled; she is the only focus of your being. Such is the magic of a tigress sighting in the Ranthambore National Park, which is a major highlight of the Smithsonian Journeys Mystical India trip.

The tiger is India’s national animal and the pride and joy of all Indians.  Tigers have been venerated in India since ancient times. The great warrior goddess Durga Devi has the mighty tiger as her vahana (vehicle). The all powerful Lord Shiva is always shown seated on a tiger skin. For the Warli tribespeople in western India, Vaghdeva or the tiger deity is an important deity to whom a part of the harvest is always offered. In West Bengal, the Sufi saint Gazi Pir is always depicted riding a tiger—he is venerated as one who can control even the fierce tiger.

Sadly, the status of tigers in India is dismal today. Despite the fact that India holds over half the world's tiger population, there are fewer than 1500 tigers left in the wild in the country.  Man-animal conflicts over land use, decreasing forest cover and extensive poaching have resulted in dwindling tiger numbers, a fact that is of great concern worldwide. Nature preserves across India like the Ranthambore National Park are some of the safe havens for India’s declining tiger population and offer a chance to see the tiger in the wild.

Visiting the Ranthambore National Park is a magical experience—it is one of the most picturesque wildlife sanctuaries not only for its beautiful grasslands, crystal clear lakes and dry deciduous forests but also because of its setting against a magnificent thousand year old fort.  Scattered throughout the wildlife sanctuary are evocative ruins of old temples, hunting lodges and pleasure palaces. Seeing a tiger or tigress moving gracefully through the old ruins is a surreal experience—a poignant reminder that humans once ruled where now Nature reigns supreme.

Earlier the private hunting preserve of the rulers of Jaipur, Ranthambore was declared by the Indian government as a wildlife sanctuary in 1957. In 1974, the park was included in the government’s tiger conservation programme, "Project Tiger" and was designated as a National Park in 1981.

Getting to the Ranthambore tiger preserve is an experience in itself. After the busy city streets and markets of Delhi and Jaipur, a ride through vibrant yellow mustard fields brought us to the small town of Sawai Madhopur where we were to spend the night in the former hunting lodge of the Jaipur royal family, now a luxury hotel. Here, we boarded an open canter bus and set off for the National Park. The first view of the Ranthambore Fort in the distance is breathtaking – perched high up on the edge of the tall cliffs, the ancient walls have withstood the test of time. We pass through an ancient gateway, surrounded by huge trees where langur monkeys lounge. Gigantic stone boulders festooned with the aerial roots of banyan trees give a very Indiana Jones kind of feel to the place, and the possibility of sighting a tiger any minute adds to the excitement.

Tigers are elusive creatures … and not ones to appear on command. There have been trips where we have seen as many as five tigers and others where we have seen none. Sometimes, one turns a bend and a tiger is right there on the road. At other times, the tiger/tigress has been partially hidden in the foliage or in the lake. In India, like with many other aspects of life, we believe tiger sightings are dependent on whether you are fated to see one. I tell guests that the more good karma one has, the stronger is the possibility of seeing a tiger. Needless to say, if we spot a tiger, everyone is happy. We have both good karma and have seen the magnificent beast.  When we do not spot tigers, it can be a bit disappointing. But in the spirit of mystical India, there is nothing to worry about. There are many life-times still left, more good karma to accumulate and of course, a reason to come back to India!

Click here to learn more about traveling to India with Minhazz and here to learn about our Independent Journeys to India, which we'll customize according to your schedule, budget, and interests.