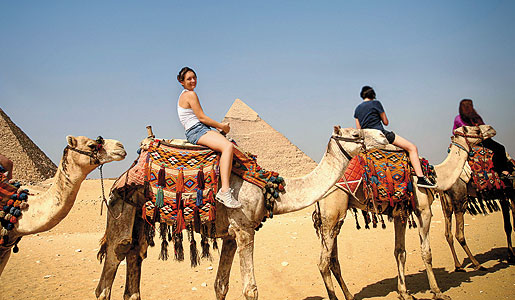 One of the most popular destination for Smithsonian travelers is Egypt. There's something everyone finds intriguing about this ancient land—whether it's history, culture, archaeology or artifacts that pique your interest most. So, given the love for this country, we're celebrating Egypt Week at Smithsonian Journeys! Check back each day for more on Egypt.

We'll begin with the children of Ancient Egypt. All of us have experienced childhood, but children in ancient Egypt lived much differently than we do now. The ancient Egyptians defined roles sharply for small children, prepubescent kids, and adults with full responsibilities to society. The average life span of an Ancient Egyptian was about 40 years, so childhood ended at puberty and young Egyptians quickly learned their roles in society. By age 14, ancient Egyptians were considered adults and would have been involved in jobs, marriage, and children of their own.

For the typical Egyptian child, pets were a wonderful form of entertainment, including dogs, kittens, ducks, and pigeons. While wealthier children had access to dolls and a variety of other toys, most children learned from what was around them. Children who were not of the upper classes mirrored their parents roles in performing household chores (for girls), or working in the fields (for boys). These children did not attend school as we do today, but they did begin learning their family's trade, as early as age four.

For royal children, education was taken seriously and included reading, writing and mathematics. Other wealthy boys might have trained to become scribes while attending temple schools or trained to become army officers. Girls, however, did not attend school, but many did learn to read and write.

When you were a kid, what did you want to be when you grew up?

Learn more about being a kid in ancient and modern Egypt on our Egyptian Family Odyssey!