An Unlikely Survivor of the Battle of Little Bighorn 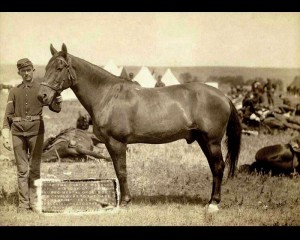 Comanche, the only U.S. Army survivor in the Battle of Little Bighorn, photographed in 1887

There were many notable characters that history has documented from the Battle of Little Bighorn.

First, there was the notorious Lieutenant Colonel George A. Custer, a former Civil War hero with an ego and recklessness that led him and his men to complete defeat in Montana. As the military leader of the U.S. Army's 7th Calvary, he led 263 soldiers and various personnel into Lakota Sioux and Cheyenne territory on June 25, 1876, with tragic results.

Then there was Crazy Horse, a well-respected Oglala Lakota warrior who was instrumental in the defeat of Custer. He led a surprise attack with more than 1,500 Lakota and Cheyenne fighters against Brigadier General George Crook's own force of 1,000 and his allied crew of 300 Crow and Shoshone warriors. This separate conflict, called the Battle of the Rosebud, meant that Crook could not join the 7th Cavalry at Little Bighorn and left Custer without enough men. The result was only one survivor.

The only survivor of the U.S. 7th Cavalry at Little Bighorn was actually a horse of mustang lineage named Comanche. A burial party that was investigating the site two days later found the severely wounded horse. He was then sent to Fort Lincoln, 950 miles away, to spend the next year recuperating from his injuries. Even though the horse remained with the 7th Calvary, it was ordered that he never be ridden again and be formally excused from all duties. The horse's primary responsibility going forward was at formal military functions where he was draped in black, with stirrups and boots reversed, at the head of the Regiment.

Comanche eventually died at the age of 29 of colic on November 7, 1891. The officers of the 7th Calvary wanted to preserve the horse, so after the taxidermist completed the project, Comanche was put on display in the Chicago Exposition of 1893.

Who is your favorite famous horse from history? Share below.