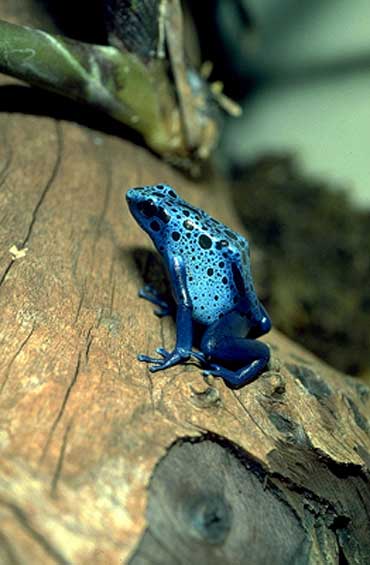 The poison dart frog, above, is found in the Amazon rain forests of Central and South America.

Sure, it’s pretty, but this little frog who measures between less than an inch and two inches can actually take down a small animal with its powerful toxin. That’s why it is a bright shade of blue, as to say to predators, “Don’t mess with me.” These frogs are also known as poison arrow frogs because some indigenous tribes in the Amazon have used their secretions to poison their darts for hunting for generations. It’s easy to confuse these frogs with the over 44 different species of harlequin frogs, which are actually toads, and have the same bright colors and poisonous secretions that are found in the region.

These frogs are a tiny group of amphibians who are part of a vast animal community that live in the Amazon rain forest, a region that spans 2,722,000 miles in South and Central America. Other residents of the region include Golden Lion Tamarins, the Dusty Titi Monkey, and our favorite, the Giant Anteaters . Check out little Baby Cyrano, who was born at the National Zoo on March 12, 2009.