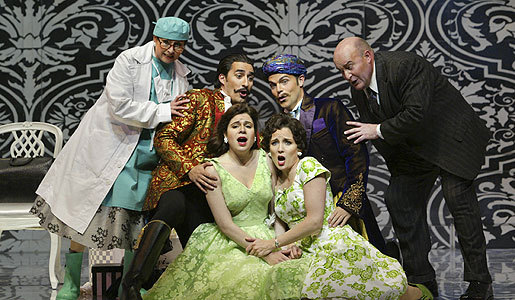 Smithsonian Journeys: When and how did you first become interested in opera?

Arthur Kaplan: Although I was born and brought up in New York City, my family was not much interested in classical music. We went to Broadway musicals, but not to symphony concerts, ballet or opera. As a teenager, I developed a taste for classical music but thought opera was for a high society elite in tuxedos and evening gowns. Little did I know! As a first-year graduate student at the University of California in Berkeley, I decided on a whim to attend a free matinee performance of Aida. At least I had heard of the opera and thought that if I didn’t like the performance, I could enjoy an few hours basking under the autumnal sunny bay area skies. Well, I was bowled over! Not only did I thrill to Verdi’s sublime score, but the star-crossed lovers were sung magnificently by Leontyne Price and Jon Vickers. How’s that for a beginning!

SJ: How did your taste for opera develop?

AK: After the Aida performance, I began listening to friends’ opera recordings and a bit later to subscribe to the San Francisco Opera. Since my academic studies were in Romance languages and literatures, I had an ideal non-musical foundation for the dramatic and linguistic basis of many of opera’s most popular offerings. As I became more and more psssionate about this most all-encompassing of art forms, I left my job as a French professor for a position as writer in the PR department of the San Francisco Opera. There I was able to witness firsthand the workings of an opera company, interview many famous singers and directors, and watch the amazing process of how an opera production evolves from the beginning of the rehearsal period until opening night.

SJ:  Do you have a favorite composer and why?

AK:  My favorite composer is Giuseppe Verdi. Not only did he continue to develop interestingly and dramatically during a career spanning more than 50 years, his operas are filled with a deep sense of humanity for man’s foibles and triumphs. There is a touching inscription near Verdi’s tomb at the Casa di Riposo, the home for indigent musicians which he established in Milan, that sums it up beautifully: “Pianse ed amò per tutti,” “He cried and loved for everyone.”

SJ:  The two main venues for Smithsonian Journeys for opera in the United States in 2010 are the Metropolitan Opera in New York City and the Santa Fe Opera Festival in New Mexico. How do these venues differ?

AK:  The Met is arguably the leading opera venue in the world with a seasonal repertory of over 25 opera a year in lavish productions, cast with the world’s leading singers. In the imposing red plush interior with its magnificent acoustics, a fascinating variety of production styles can be experienced. The opera house in Santa Fe, majestically set on a hill seven miles from the center of New Mexico’s enchanting capital, is unique in its indoor/outdoor design. During the festival, America’s prime summer opera venue, the company presents five challenging works with stellar casts featuring exciting young singers often on the brink of important international careers. Some productions have as a backdrop the starry sky and hills of New Mexico.

SJ:  What gives you the greatest satisfaction as Study Leader for Smithsonian Journeys opera tours?

AK:  The possibility of kindling the flame of interest and enthusiasm for an art form which I dearly love among newcomers to opera and, secondly, of broadening the horizons and knowledge about that art form in those already interested in opera.