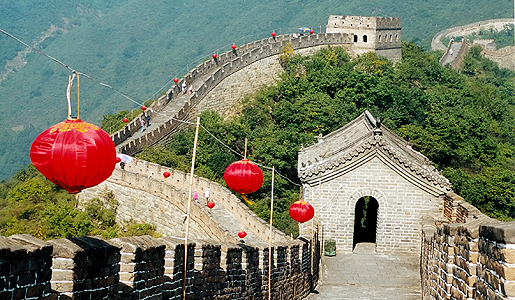 First built in the sixth century and located northeast of Beijing, the Mutianyu section of the Great Wall of China is one of the best preserved.

My first glimpse of the Great Wall was through a chilly gray mist early one fall morning. Standing on the ramparts gazing at the vast expanse of parched land beyond, it was easy to imagine the concern of Chinese rulers with destruction of their sophisticated culture by hordes of mounted warriors they regarded as barbarians.

I’d read about the wall from childhood--that it began at the sea in Shanhaiguan in the northeast, weaving dragonlike across fifteen provinces before ending we knew not where, in the sands of Central Asia. And that it was the only man-made structure that is visible from outer space.

Much of this proved untrue. The wall is not visible from outer space. And scientific advances have enabled us to track the end of the wall with far greater accuracy. Surprises still occur: in fall 2009, a new section was discovered near the Yalu River that borders present-day North Korea. The wall did not start out as a single structure, but as a series of fortifications built by different kingdoms, the first dating back to 500 BC Stitched together under the Ming dynasty (1368-1644 AD), it had not, nor had the walls before it, been able to prevent barbarians from entering China. The Ming itself was overthrown by a Manchu invasion that came through a crucial pass; the barbarians then founded the Qing dynasty. By mid-Qing the wall, in recognition of its deficiencies as a barrier, had fallen into disrepair.

When the government of the People’s Republic of China began to value China’s ancient heritage in preference to Marxist ideology, it made the shocking discovery that local peasants had been dismantling pieces of the wall, brick by brick, to use in constructing homes and pig sties. The wall, now repaired and designated a UNESCO World Heritage Site, is again a symbol of pride. And the claims of revisionists and debunkers notwithstanding, it truly is a great wall.

See the Great Wall for yourself with Dr. Dreyer in March, 2010.