From Lisbon to London Aboard the 184-guest Le Champlain 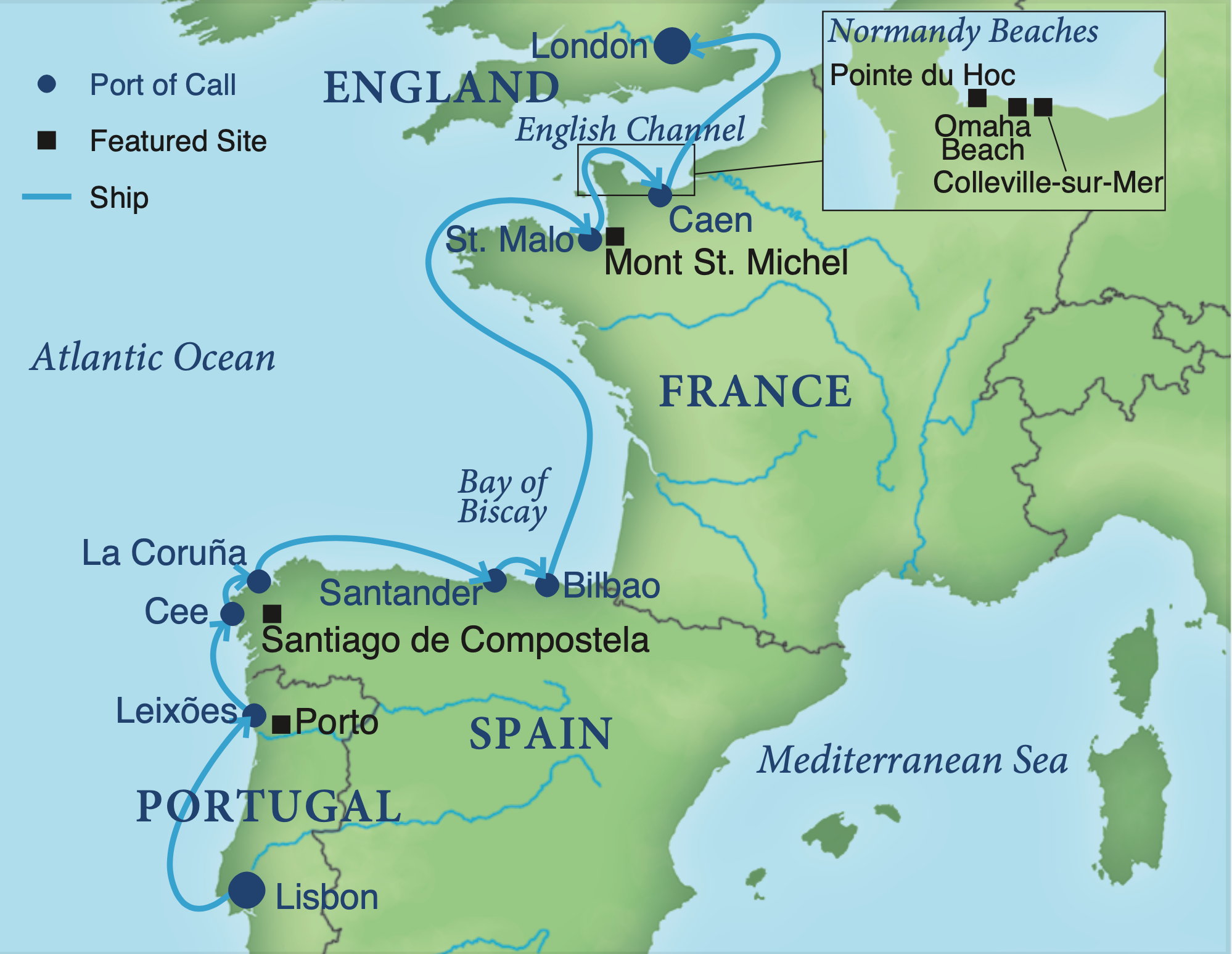 Experience centuries of history from the Roman era to the D-Day landings as you voyage along the coasts of Portugal, Spain, France, and England. Encounter a wide spectrum of architectural masterpieces, including Porto’s sumptuous Stock Exchange palace and Frank Gehry’s iconic Guggenheim in Bilbao. Trace the critical role of religion in European history at the pilgrimage site of Santiago de Compostela and the abbey of Mont St. Michel, and explore the events of World War II on the beaches of Normandy.

Arrive in Lisbon, a city on seven hills located at the mouth of the Tagus River. Settle into your cabin this afternoon and set sail, passing two of Lisbon’s World Heritage monuments, the Jeronimos Monastery and the Tower of Bélem, as we make our way toward the Atlantic. (D)

Dock in Leixões and transfer to nearby Porto, a former Roman outpost and the center of the port wine trade since the 17th century. Set on the steep banks of the Douro River, this World Heritage-listed city showcases artistic and architectural treasures derived from the civilizations that have occupied it—from the Romans and the Visigoths to the Moors and the Christians. Discover alluring Porto on your choice of two excursions. Visit the 12th-century cathedral and see stunning azulejos—Portugal’s traditional painted tiles—in the cloister. Stroll through the historic Ribeira district along the river, and take in expansive views from the platform of the Dom Luis I Bridge, designed by a disciple of Gustav Eiffel. Continue to a port lodge to learn about the history, manufacture, and consumption of Porto’s famous fortified wine, and sample several varieties. Alternatively, delve deeper into some of the city’s architectural gems on a tour of the ornate Church of São Francisco and the Stock Exchange, a neoclassical palace known for its gold-covered Golden Room and its exquisite Arab Room, inspired by the Alhambra. Later, enjoy time on your own to meander through the lovely Ribeira district. (B,L,D)

Sail into a bay on the northwestern coast of Spain and go ashore in the town of Cee. Travel into the oak- and pine-forested hills of Galicia to the region’s World Heritage-listed capital, Santiago de Compostela. Here, medieval pedestrian streets lead to the expansive Praza del Obradoiro and the grand Romanesque cathedral, a pilgrimage site since the Middle Ages said to enshrine the tomb of St. James. Take a walking tour of the city center including the town hall and the Palace of Saint Jerome. You’ll have free time to venture into the cathedral to see its distinctive medieval and baroque architectural elements. Gather for lunch at the stunning Hostal de Los Reyes Catolicos, commissioned by Ferdinand and Isabella in 1501 to welcome pilgrims. Then drive through the countryside to meet your ship in A Coruña. Before we board, make a brief stop at the Tower of Hercules, a World Heritage site that has served as a lighthouse since the Romans built it in the first century. (B,L,D)

Trace the northern coast of Spain to Santander, and travel overland to Bilbao. Set off on a tour of this dynamic metropolis, where the traditions of the past live side by side with futuristic buildings of world renown. Begin at the remarkable Guggenheim Museum Bilbao, an iconic creation of titanium, granite, and glass designed by Frank Gehry. An expert guide will lead you through the contemporary art collection, after which you will have time at leisure to explore on your own. Then take a stroll through the narrow streets of the old city, where handsome Renaissance and baroque buildings coexist with modernist architecture. Highlights include the Gothic Cathedral of Santiago and the elegant Plaza Nueva, with its distinctive porticoes. (B,L,D)

Sail the Bay of Biscay into French waters and continue north, enjoying a day to relax at sea as we follow the coast of France to Brittany. Take advantage of the ship’s superb amenities, opting for a treatment in the spa or a work out at the fitness center. If weather permits, go for a swim in the pool or read a book on the sundeck. Our Smithsonian Journeys Experts will present lectures on the region. Visit the ship’s upper deck to take in views of the open sea and perhaps spot seabirds or marine species. (B,L,D)

Our first port of call in France is the walled city of Saint-Malo. Choose to spend the day discovering this seafaring city’s dramatic history, from its Celtic roots to its days as a base for privateers. On a walking tour of the walled city view the castle and ramparts, the house of Duchess Ann, and the cathedral where explorer Jacques Cartier is buried. Visit the 18th-century home of the powerful director of the French East Indies Company, now a French Historic Monument and hotel. Then enjoy a concert of medieval and Celtic music and a tasting of the cider for which the region is renowned. Alternatively, take an excursion to the World Heritage site of Mont St. Michel, a fortified abbey perched on a tidal island. A pilgrimage site since the early 8th century, this tiny village began as a humble oratory and grew into an influential Benedictine monastery. Experience its extraordinary cloisters, refectory, stained-glass windows and visit the Abbaye du Mont-St-Michel, a three-story Gothic masterpiece. After lunch in a famous local restaurant, you’ll have free time to explore the village. (B,L,D)

Located in the heart of Normandy, Caen was built by William the Conqueror with considerable help from his wife, Queen Mathilde of Flanders. Choose to delve into the city’s medieval history—and the legacy of William and Mathilde—on a guided tour that includes the Women's Abbey and its 11th-century Church of the Holy Trinity, and Caen Castle, one of the largest walled fortifications in Europe. Damaged during the bombings of 1944, the Castle has since been restored and its extensive walls and towers are truly impressive. Take a walk on the castle ramparts for a view of the town, and visit the Men's Abbey to see St. Stephen’s Church, an architectural masterpiece that blends simple Norman style with Gothic intricacy. Or set out on an excursion to the Normandy beaches, where Allied soldiers made their dramatic landing on D-Day. Contemplate thousands of solemn crosses and Stars of David in the American Military Cemetery at Colleville-sur-Mer. Look out over the serene sands of Omaha Beach and visit evocative Pointe du Hoc, where U.S. Rangers scaled sheer cliffs under heavy enemy fire. (B,L,D)

Enjoy a final day at sea as Le Champlain plies the English Channel toward London. Hear engaging lectures by our experts, opt for a visit to the sauna or a massage, or find a comfortable spot to read or take in the views as we pass between the shores of England and France. (B,L,D)

Arrive in London early this morning and disembark the ship after breakfast. Transfer to the airport for your flight home. (B)