With its balmy island breezes and centuries-old maritime traditions, the Caribbean is an ideal winter interlude. Discover the Windward Islands as you learn about the Caribbean’s complex history, visit verdant gardens, and enjoy exquisite beaches.

A Cruise from Grenada to Barbados Aboard the Le Champlain

With its balmy island breezes and centuries-old maritime traditions, the Caribbean is an ideal winter interlude. Discover the Windward Islands as you learn about the Caribbean’s complex history, visit verdant gardens, and enjoy exquisite beaches. 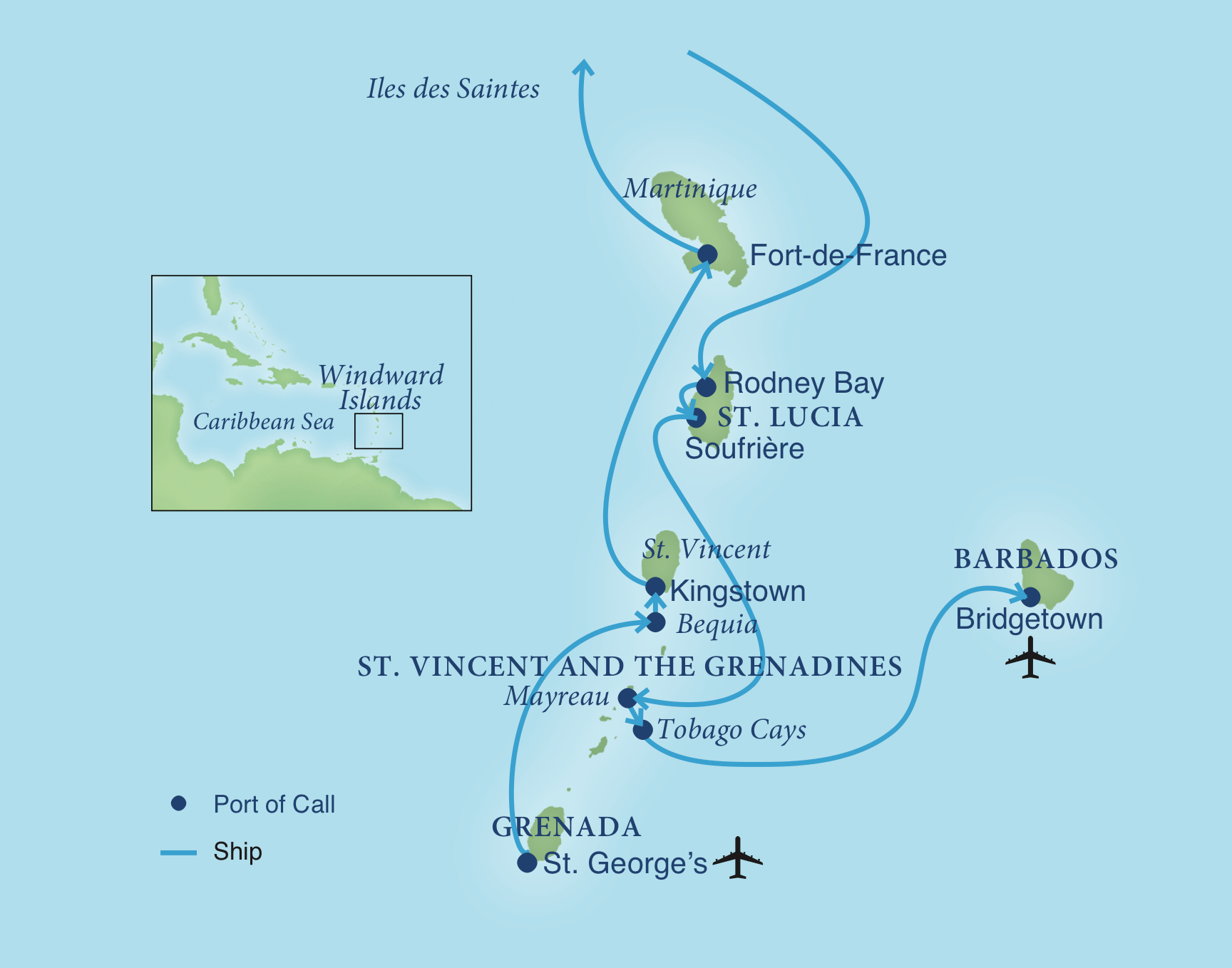 With its balmy island breezes and centuries-old maritime traditions, the Caribbean is an ideal winter interlude. Discover the rarely visited Windward Islands as you learn about the Caribbean’s complex history, visit verdant gardens, and enjoy exquisite beaches and clear blue waters.

Depart the U.S. for Grenada, known as the “Spice Island.” Upon arrival, embark Le Champlain. Join your traveling companions for the Captain’s welcome reception onboard this evening. (R,D)

See historic landmarks in this picturesque capital, including the cannons and defensive tunnels of Fort George. Enjoy panoramic views of the Carenage, a scenic waterfront dotted with colorful fishing boats and Georgian-style buildings.

Walk among cinnamon, clove, and bay trees in an herb and spice garden, where ginger, pepper, and turmeric also grow and learn about rare botanicals, such as zebapique and jump-up-and-kiss-me, used in cooking, medicines, and liqueurs.

See lush Bequia, the largest of the Grenadines at just seven square miles and arguably the most beautiful. Although Amerindians from South America first inhabited Bequia, it was the Caribs who named it the “Island of Clouds.”

Enjoy spectacular views of yacht-filled Admiralty Bay from the remains of 18th-century Hamilton Fort. See sweeping vistas of the Caribbean Sea and the capital city of Kingstown from the early-19th-century ruins of Fort Charlotte, built atop a steep promontory. Known as the “City of Arches,” Kingstown is replete with historic architecture, including the 19th-century cathedrals of St. George and St. Mary. Walk through the largest botanical gardens in the Western Hemisphere, populated with trees from around the world and the endangered St. Vincent parrot. (B,L,D)

The most heavily French-influenced of all the Caribbean Basin, Martinique celebrates its Creole heritage amid paradisical scenery. In Fort-de-France, see the varied architectural styles of its historic buildings blending harmoniously with the landscape, including the elaborate Romanesque Schoelcher Library. Admire the verdant Pitons du Carbet from the Sacré Coeur de Balata, a reduced replica of the Basilica of Montmartre in Paris.

From the veranda of a Creole farmhouse in the famous Balata Gardens, watch hummingbirds feed on sweet nectar. Then, wind through a shaded canopy of trees, including twining begonias, mahogany, musa nana, and bamboo, around the 3,000 varieties of its tropical plants.

Arrive at Iles des Saintes, also known as Les Saintes, a small, charming archipelago. Enjoy a day at leisure and stroll the quaint streets of Terre-de-Haut, lined with bistros, cafes, and shops, or walk to the beach to swim or snorkel.

Gather on deck for a barbecue dinner under a bright blanket of stars (weather permitting). (B,L,D)

In Soufrière, wander a canopied haven of vivid flora in Diamond Falls Botanical Gardens, cultivated since the 18th century, past rocks tinted yellow, green, and purple from the falls’ mineral-rich waters.

An ideal snorkeling retreat shielded from the sea by Horseshoe Reef, Tobago Cays Marine Park is an underwater gallery of colorful sponges, conchs, sea turtles, and fish. Join your traveling companions for the Captain’s farewell reception this evening. (B,L,R,D)

Disembark in Bridgetown and continue on the Post-Program Option or transfer to the airport for your return flight home. (B)

A Cruise of Panama and Costa Rica