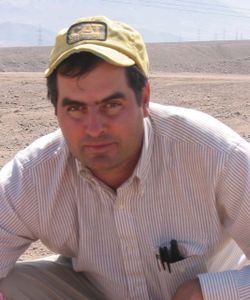 Paul Goldstein received his Ph.D. in 1989 from the University of Chicago and previously held a position in the Department of Anthropology at Dartmouth College. His teaching and research focus on anthropological archaeology, complex societies, Latin America and Andean South America.

Paul's research involves the study of how Tiwanaku civilization, the earliest state level polity that emerged in the important lake Titicaca region of the southern Andes, expanded, and collapsed (ca. 350-1000 AD).

He has received a variety of research funding, including grants from the National Science Foundation, Wenner-Gren, H. John Heinz III Charitable Trust, Fulbright (1999 for Ecuador), and Fulbright-Hays (1998 for Peru) as well as Tinker Foundation and Mellon Foundation. Paul has been the recipient of numerous fellowships and awards including Dumbarton Oaks Fellowship in Pre-Columbian Studies and has held several museum positions at Museo Contisuyo, Peru; American Museum of Natural History, New York; Field Museum of Natural History, Chicago; and Museum of Science and Industry, Chicago. Paul has been Associate Professor of Anthropology at the University of California, San Diego.

Paul was wery knowledgeable and pleasant to be around. He is well versed in his area of study and very forthcoming when questions are asked.

Can't say enough good things about Paul. He was a wonderful addition to our group.

Machu Picchu and the Galápagos