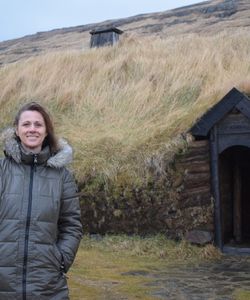 Assistant Curator of the Smithsonian Institution's special traveling exhibition, Vikings: The North Atlantic Saga, from 2000 to 2004, Elisabeth Ward went on to complete her Ph.D. in Scandinavian Languages and Literature from the University of California at Berkeley, and continues to lecture for Smithsonian Journeys. Dr. Ward has a long-term passionate interest in all things Icelandic. Listening to her mother, speak to her grandparents in the Icelandic language, Elisabeth became fluent over many years while growing up in Southern California and traveling to Iceland during the summer. As part of her Ph.D. research, Dr. Ward lived in Iceland from 2006 to 2010, receiving Icelandic citizenship. Her dissertation focuses on the medieval Icelandic narratives called the Sagas of Icelanders; Dr. Ward’s research reveals the relationship between those stories and the actual physical landscape of Iceland. She argues they are “co-constituted”, meaning one cannot be read without the other.

In addition to appearing on documentaries for the Smithsonian Channel and others, she also worked as the Program Director for Vikingaheimar Museum in Reykjanesbær, Iceland, and as the Director of the Scandinavian Cultural Center at Pacific Lutheran University in Tacoma Washington. Since 2005, she has served as a consultant for Walt Disney World’s Epcot Center helping to create exhibitions for their Norway Pavilion about the Vikings, Norwegian folk culture, and Norse mythology. She recently returned to California to take a position as Executive Director of the Los Altos History Museum. The daughter of an American serviceman who met his wife while stationed in Iceland in the 1960s, Elisabeth is the mother of a 16-year-old son who also has Icelandic citizenship.