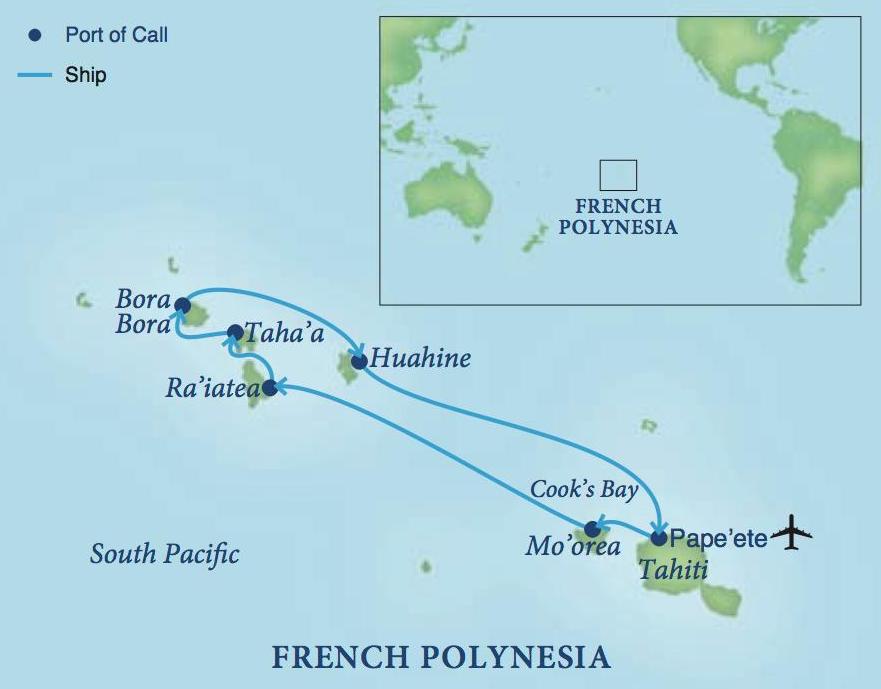 Escape the cold and bask in the warmth and pristine beauty of Tahiti, "the Pearl of the South Pacific," as well as the sister islands of Pape'ete, Mo'orea, Ra'iatea, Taha'a, Bora Bora, and Huahine. Trace the voyages of legendary explorer Captain Cook and explore the places that sparked the imaginations of scores of writers and artists as your four-masted sailing ship plies a course through deep-blue waters, its sails billowing majestically in the wind. Our South Pacific adventure will excite your senses and provide a deeper appreciation for these exotic islands and their remarkable cultures.

The remnant of a long-extinct volcano, the heart-shaped island of Mo’orea was once a sanctuary for vanquished warriors from Tahiti. It was visited by Captain Cook in 1777 and by the American novelist Herman Melville in 1842, and also inspired James A. Michener to write his unforgettable Tales from the South Pacific.

Impressive temples evoke Mo’orea’s Polynesian heritage while European churches underscore its role as the center for 19th-century missionary activity in the Society Islands. Contemporary islanders continue the ways of their forefathers, farming pineapples and papayas and crafting fine works of art from seashells and indigenous wood. Enjoy an afternoon at leisure for snorkeling opportunities in Mo’orea’s turquoise lagoons or shopping in downtown Moorea. If you choose an optional excursion, you can explore the island’s beaches, forests, and take a walk through an ancient village where archaeologists are piecing together the pre-history of the Polynesians. Along the way you will learn and talk about the geology, plants and animals, Polynesian settlement, European explorations, and modern environmental issues. The leisurely pace of this tour will allow for plenty of photo opportunities.

Enjoy a presentation by Frank Murphy from Gump Research Station to learn more about the unique ecosystem of French Polynesia. (B,L,D)