Visit four distinct nations and experience the cultural rebirth of the Baltic States and the imperial riches of St. Petersburg on this Classic Land journey.

Visit four distinct nations and experience the cultural rebirth of the Baltic States and the imperial riches of St. Petersburg on this Classic Land journey. 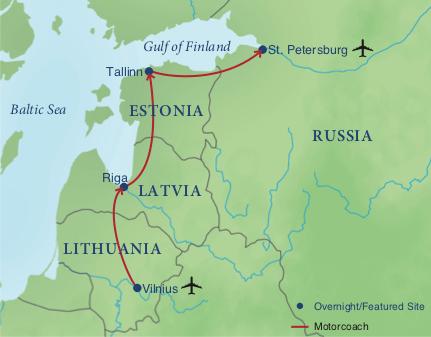 Expectations: One of our Classic Land Journeys, this tour features four countries and visits to many cities, iconic sites, and hidden gems. Although comprehensive, it's not rushed, but well paced and finely tuned. Expectations include longer touring days with many full-day motor coach excursions and four different hotels. Mostly full-day excursions from four to six hours; five afternoons at leisure. Standing and walking for long periods of time during city tours, museum visits, and outdoor activities. Daily walks of up to three miles; walking over sometimes difficult terrain (e.g. cobblestones, city hills, stairs without handrails, absence of elevators); some longer walks to get to city centers where coaches are prohibited. There are three longer coach rides of approximately four to five hours duration, but stops are made along the way. A typical day of touring begins at 8:00/9:00 a.m.

After connecting in Europe, a short flight this morning brings us to Vilnius, the attractive Lithuanian capital with Baroque architecture, numerous churches, medieval towers and fortifications, and one of Eastern Europe’s oldest “Old Towns.” Your afternoon in this historic city is at leisure before tonight’s dinner at the hotel. (D)

See the highlights of Vilnius, a World Heritage site, on this morning’s tour, including Cathedral Square, Gediminas’ Tower, Vilnius University, and the President’s Palace. Also tour the fascinating KGB Museum. The remainder of the day is at leisure, perhaps to relax at one of the many outdoor cafés, explore the old Jewish Quarter and ghetto, or admire the city’s architectural diversity. (B)

Today travel about 20 miles outside Vilnius to Trakai, the medieval capital of Lithuania set in a resort village surrounded by five lakes. Tour 15th-century Trakai Castle, with exhibits commemorating the days when the Grand Duchy of Lithuania stretched all the way from the Baltic to the Black Sea. After a turbulent history of Russian rule, in 1991 Lithuania became one of the first of the Soviet Union’s breakaway republics and today, again, is a sovereign democratic nation. (B,D)

Depart this morning for Riga, the Latvian capital. En route stop for lunch in Siauliai where you visit the Hill of Crosses, a pilgrimage site and symbol of Lithuanian nationalism. After crossing the border into Latvia, travel through gentle countryside to the restored 18th-century Baroque palace of Rundale. Designed by Bartolomeo Rastrelli who also designed St. Petersburg’s Hermitage, Rundale’s construction took more than 30 years and 1,500 workers. From here continue to surprisingly sophisticated Riga, once known as the “little Paris of the North.” Dine tonight at the hotel. (B,L,D)

This morning’s city tour reveals the special treasures of this Baltic gem, once Russia’s coveted warm-water port and the largest of the Baltic capitals. Riga boasts lovingly restored architecture ranging from medieval to Art Nouveau; a well preserved Old Town; magnificent churches, including St. Mary’s Cathedral (the Dom) with its 6,789-pipe organ; and a lively arts scene. The afternoon is at leisure and your well-located hotel offers easy access to Riga’s attractions. (B)

Today travel east of Riga to Sigulda to visit Gauja National Park, Latvia’s premier nature preserve. Your excursion includes a visit to Gutmanis’ Cave, a 35-foot cavern bubbling with fresh spring water believed to have curative powers, and the ruins of Turaida Castle, whose round red brick tower rises above the forest canopy. Return to Riga mid-day and dine together tonight. (B,D)

En route to the Estonian capital of Tallinn, stop for lunch in seaside Parnu, Estonia’s “summer capital.” Reach Tallinn late this afternoon; dinner is at a local restaurant. (B,L,D)

This northernmost Baltic capital has endured a history similar to that of its cousins: a favored port location often coveted by its more powerful neighbors; centuries of war with brief periods of independence; 20th-century annexing by Russia; and finally, again, independence. See layers of Tallinn’s tumultuous history on this morning’s city tour featuring the surprisingly well-preserved medieval Old Town. Then the remainder of the day is free to enjoy this 800-year-old city as you wish. Green spaces abound, including vast Kadriorg Park, surrounding the palace and featuring a Japanese tea garden. (B)

This morning visit the Estonian Open-Air Museum at Rocca-al-Mare, where 18th- and 19th-century life is recreated with authentic wooden farmhouses, churches, and other structures from rural Estonia. Enjoy lunch together then an afternoon at leisure to explore Tallinn independently. (B,L)

Depart this morning by coach for St. Petersburg, stopping for lunch in Narva, Estonia. After arriving late this afternoon enjoy dinner together tonight. (B,L,D)

Tsar Peter the Great’s “window on the West,” St. Petersburg was built in the early 1700s on 44 islands, mostly swampland--a feat that took the lives of thousands of workers. Today it’s a beautiful city, laced with canals, graceful bridges, and Empire-style buildings. Your day-long tour includes a visit to awe-inspiring St. Isaac’s Cathedral, whose construction took more than 40 years. See the Peter & Paul Fortress, the Bronze Horseman statue of city founder Peter the Great, and the main thoroughfare of Nevsky Prospekt. Then for a fascinating window on Russian life, join a local family for lunch and conversation. This afternoon take a guided tour of the world-renowned Hermitage Museum, housing one of the world’s greatest fine arts collections. (B,L)

This morning travel to Peterhof, one of the many royal “summer” palaces built by the Romanovs during the last two centuries of their rule. Most of these palaces were virtually destroyed by retreating Germans during World War II and later rebuilt to their original designs, complete with gilding. Known for its elaborate fountains with gold statues and 142 jets, Peterhof sits in a huge park with a formal 18th-century garden. Your tour includes both the Grand Royal Palace and the Upper and Lower Gardens. Tonight gather for dinner to bid “da svidniya” to St. Petersburg. (B,D)

Depart this morning for your connecting flight to the United States. (B)