Savor the charm of the South and gain insight into its history during a cruise along the Intracoastal Waterway.

A Cruise between Charleston and Jacksonville Aboard the Independence

Savor the charm of the South and gain insight into its history during a cruise along the Intracoastal Waterway. 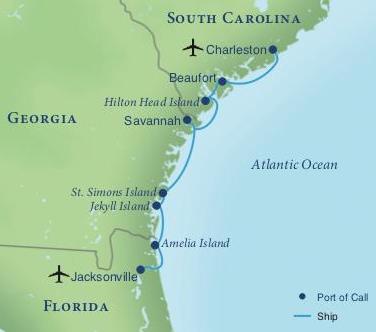 Savor the splendors of the South on this delightful coastal voyage! Explore the historic gems of Charleston and Savannah and see how the vivid and varied culture of the Low Country has evolved from colonial beginnings to modern day. Plus, discover white-sand beaches, wooded barrier islands, and vast stretches of golden marshes that are home to a myriad of wildlife.

Arrive into Charleston and transfer to the Francis Marion Hotel.

This evening, gather for a private Smithsonian Journeys welcome reception and briefing at the hotel. The remainder of the evening and dinner is independently. (R)

Enjoy a buffet breakfast at the hotel followed by checkout. The city of Charleston is as exquisitely preserved and aesthetically pleasing with its blend of antebellum architecture, cobblestone streets, and historic landmarks. In the company of an expert local guide explore sights like St. Michael’s Church, colorful Rainbow Row, the famous Battery, and more.

Transfer to the Independence where a light lunch will be served onboard. Later sail south from Charleston en route to Beaufort, South Carolina. Each evening, pre-dinner cocktails and hors d’oeuves will be served. This evening enjoy a festive Captain’s welcome dinner. (B,L,D)

This morning, depart for Lady’s Island and St. Helena to explore the grounds of a former plantation. You’ll also stop at the Penn Center built in 1855, one of the first schools in the country for freed slaves. After lunch aboard the ship, depart on a carriage tour of charming Beaufort lined with colonial and antebellum homes.

Get together for camaraderie and conversation in the Smithsonian Travelers Corner. (B,L,D)

The island is named after Captain William Hilton, who in 1663 identified a headland near the entrance to Port Royal Sound. Depart the Independence and embark on a private boat tour of the Sea Pines Resort Forest Preserve. This 600-acre preserve features some of Hilton Head’s many indigenous plants and animal species, including the American alligator.

In the afternoon, there will be time independently to further explore Hilton Head or relax back on board the ship. (B,L,D)

With its emerald tree canopy, quaint cobblestone streets and majestic architecture, Savannah is still a bustling seaport with renowned historic districts that preserve its phenomenal 19th-century wealth and opulence. The Independence will dock directly in the famous River Street area, known for open-air shopping, world-class restaurants, and southern hospitality. On the dock, meet your local guide for a trolley tour of the most popular attractions including Factor’s Walk, the Cotton Exchange, the Massie Heritage Center that showcases the cultural development of Savannah. As part of the trolley tour experience, you can continue to use the trolley system throughout the remainder of the day.

You can continue to explore the city independently or return to the ship for lunch. This afternoon journey by motor coach to the Mighty Eighth Air Force Museum which houses an impressive collection of WWII aviation memorabilia. Enjoy an overview of the museum and a brief history lesson regarding the famed Eighth Air Force Division. Back on board the Independence early this evening, gather with your fellow participants in the Smithsonian Journeys Travelers Corner. (B,L,D)

Georgia’s coast is marked by a multitude of rivers that drain into a vast network of salt marshes, tidal flats and meandering creaks. Spartina cordgrass forms a protective band behind the barrier islands, creating one of the most extensive and productive marshland systems in the United States.

Today you’ll spend a full day sailing the coast. Soak in the atmosphere from the panoramic deck and lounges aboard the Independence. Before dining, get together with fellow travelers in the Smithsonian Travelers Corner. (B,L,D)

St. Simons Island offers guests a view of the area's past including the momentous 18th-century battlefields and sprawling, antebellum plantations.

Take a tram tour of the Jekyll Island Historic District and learn all about the Jekyll Island Club, once named “the richest, most inaccessible club in the world,” and then tour one of the famed mansions on the island.

After lunch aboard ship, visit St. Simons Island the largest of the Golden Isles. The island has a deep-rooted history spanning over four centuries. Nowhere is the island’s rich history better told or preserved than the Bloody Marsh Battle Site where on July 7th, 1742, an outnumbered force of British troops ambushed and defeated Spanish troops, halting a planned attack on Fort Frederica. Tour the battlegrounds and learn about the military strategies employed by both sides based on the unique terrain. Then visit Christ Church, one of St. Simons most treasured landmarks, with its magnificent stained glass art. (B,L,D)

Discover the natural beauty of Amelia Island, with its miles of quartz beaches and rolling sand dunes. Fernandina Beach, the island's only city, harbors a treasure trove of history, antiques, and collectibles. Take a walking tour through the Victorian seaport of Fernandina Beach. Stroll through the town's historic Centre Street, past the Florida House, and into the Silk Stocking District.

Have time independently to explore this charming town. This evening gather back on board the Independence for a festive farewell reception and dinner. (B,L,R,D)

After breakfast disembark the Independence and transfer to Jacksonville Airport for flights home. (B)