During this rare and unique itinerary, cruise along remote stretches of coastline and visit vibrant urban outposts between Maputo, Mozambique and Cape Town, South Africa. You're sure to enjoy the breadth of excursions featuring cultural sites and wondrous nature, including safari experiences.

Maputo to Cape Town aboard the Caledonian Sky

During this rare and unique itinerary, cruise along remote stretches of coastline and visit vibrant urban outposts between Maputo, Mozambique and Cape Town, South Africa. You're sure to enjoy the breadth of excursions featuring cultural sites and wondrous nature, including safari experiences. 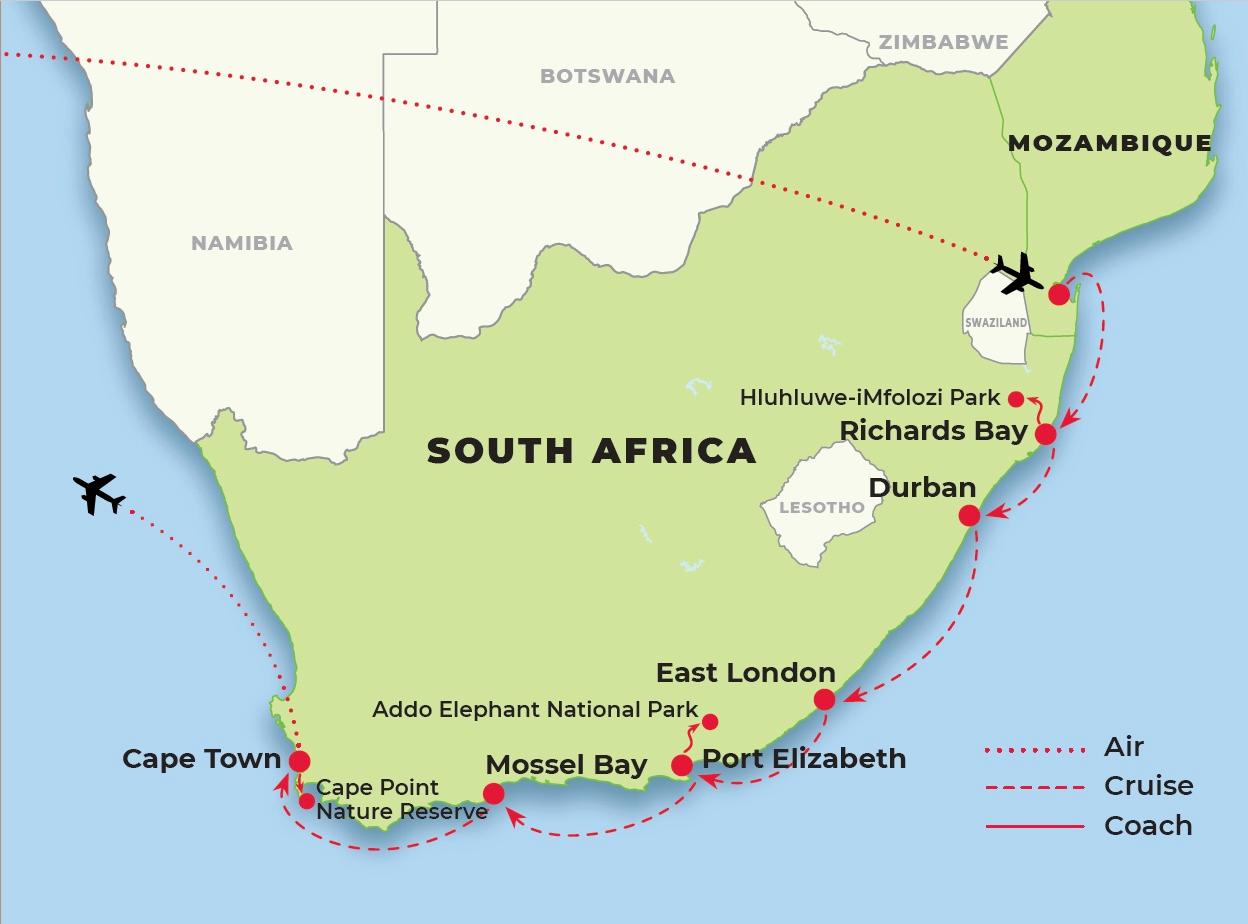 This rare and unique voyage cruises to remote stretches of coastline as well as vibrant urban centers between Maputo and Cape Town.

Arrive in Maputo and transfer to your hotel located near the Maputo seafront. Gather this evening for a welcome orientation and reception. (R)

After a morning lecture, visit the Museum of Natural History, then continue to San Sebastian Fortress, the oldest complete fort in sub-Saharan Africa. View the unique Casa do Ferro, an iron-constructed prefabricated house designed by Gustave Eiffel. Embark the Caledonian Sky this afternoon for the Captain’s welcome reception. (B,L,R,D)

Cruise along this coast this morning, arriving in Richards Bay in the late afternoon. Enjoy a sunset cruise in the iSimangaliso Wetlands, South Africa’s first World Heritage Site.

Today is a choice of full-day excursions:

Explore Durban and the Inanda Township, home of John Langalibalele, first president of the South African Native National Congress which evolved into the ANC. Spend the afternoon at sea to enjoy the amenities of the ship and lectures. (B,L,D)

Cruise along the Sunshine Coast this morning. Later, explore East London, the only river port in South Africa. Learn about the Xhosa-speaking people and their culture. (B,L,D)

Enjoy a relaxing morning at sea. This afternoon, choose between excursion options:

From Mossel Bay, strike out for a full-day adventure along the scenic Garden Route, with a stop at an ostrich farm to learn about the world’s largest bird. (B,L,D)

Spend the morning cruising then arrive at your final stop, Cape Town. Take in the spectacular views of Table Mountain, then stop at Bo Kapp, a historical center of Cape Malay Culture. Visit Kirstenbosch National Botanical Gardens, established as a center for the study and preservation of indigenous flora of southern Africa. Return to the ship late in the day and enjoy a Captain’s farewell reception and dinner this evening. (B,L,D)

Depart the ship and take a ferry to Robben Island located in Table Bay. A guided tour of this World Heritage site unveils the history of the island where Nelson Mandela was imprisoned for 18 years before the fall of apartheid. Continue to the beautifully restored town of Stellenbosch, founded in 1679 and renowned for its Cape Dutch architecture and stately oaks. In the late 17th century, French Huguenots introduced winemaking to the area and the region has since evolved to become the hub of the Cape’s wine industry. Check in to the Table Bay Hotel late this afternoon. Dinner is on your own tonight to enjoy one of the many popular Cape Town restaurants. (B, L)

Depart the hotel and enjoy the scenic drive to the Cape of Good Hope Nature Reserve, an integral part of the Cape Floral Kingdom, which has the highest known concentration of plant species in the world. Visit Cape Point, the most southern point of the African continent. Continue to Boulders Beach to observe the colony of African Penguins that live there. Return to Cape Town and gather for a festive farewell dinner this evening. B,L,D

Group transfers are provided to the airport for return flights to the U.S. (B)