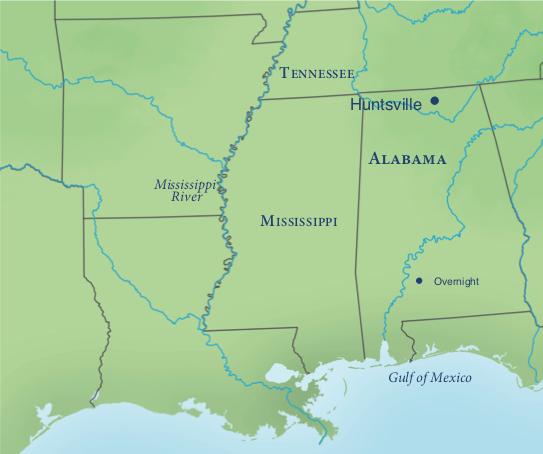 In collaboration with the renowned U.S. Space & Rocket Center (USSRC), Smithsonian Journeys invites you to travel to Huntsville, Alabama for a VIP experience. At this Smithsonian Affiliate, you’ll meet with astronauts and scientists, go behind the scenes, and don your personalized flight suit as you take part in classic Space Academy activities—all with fellow travelers who share a passion for the history and the future of space exploration.

Arrive at Huntsville International Airport and take advantage of the complimentary airport transfer to the Huntsville Marriott at the Space & Rocket Center.

Come together in the evening for a welcome reception and dinner at the U.S. Space & Rocket Center (USSRC). Dinner will be held in the awe-inspiring Saturn V Hall, which holds an authentic Saturn V Apollo moon rocket over 300 feet long. USSRC educators will introduce USSRC and its history, and provide an overview of what you and your fellow travelers will experience over the coming days. (R,D)

Return to the Saturn V Hall this morning for a private guided tour led by an expert and former NASA employee. In addition to the Saturn V rocket, the hall holds key pieces from the history of space exploration like the Apollo 16 capsule.

After lunch, take part in your first group mission as you work together as a team. Your trainer will be a former NASA astronaut who will prepare you for your mission. Along the way, you can ask many of the questions you’ve wanted to ask an astronaut. Afterward, the adventurous can experience Space Academy’s famous simulators in the AstroTrek Hall. Take a spin on the 1/6th Gravity Chair, 5 Degrees of Freedom Simulator, Manned Maneuvering Unit, and the Multi-Axis Trainer—a gimbal rig that simulates an uncontrolled spin in microgravity (260 lbs. maximum weight limit). Weather permitting, head outside after dinner this evening for a stargazing session led by USSRC staff. (B,L,D)

Huntsville is also home to Marshall Space Flight Center, the civilian rocketry and spacecraft propulsion research center of the U.S. government. (Note: the grounds of Marshall Space Flight Center are only accessible to U.S. citizens. You will need to bring government identification with you to enter the area). Explore the ECLSS (Environmental Control and Life Support System) building, where the tools that allow astronauts to survive in space are developed. Stop at a historic Redstone Test Site, which dates back to the founding years of the program when Wernher von Braun and his colleagues tested rockets here. Continue to the Laboratory Training Complex, which holds a recreation of a portion of the International Space Station (ISS) to train the Flight Control Team to support science operations for U.S. payloads aboard the ISS. Finally, observe employees at work in the Payload Operations Integration Center, which oversees the scientific experiments being performed on board the ISS.

After lunch, it’s time for hands-on endeavors. Separate into teams to build and then launch your own model rockets. After, it’s time for your next mission. Take part in a Mission to Mars that addresses the challenges of surviving on another planet.

During dinner this evening, you will attend a panel discussion with several of USSRC’s famous “NASA Emeritus” volunteers. These individuals are former NASA employees with backgrounds in engineering, computer science, and other fields who have worked on the biggest projects in the history of the U.S. space program. (B,L,D)

This morning, don your bathing suit for the Underwater Astronaut Trainer. One of only three in the U.S., this heated pool is 24 feet deep and simulates neutral buoyancy in order to train astronauts to perform tasks in microgravity. For those preferring to stay on land, meet with a speaker from the HudsonAlpha Institute for Biotechnology, a nonprofit organization that seeks to unlock the secrets of the human genome to advance medical research.

Later, enjoy a behind-the-scenes look at USSRC’s hidden gems as head curator Audrey Glasgow presents a selection of items from the archive. These include artifacts and documents from the life of Wernher von Braun—the founding scientist of USSRC—and the early years of the U.S. space program.

Come together this evening for a final farewell reception and dinner. Recap your adventures of the week and receive your own personalized Space Academy flight suit. (B,L,R,D)

Depart this morning for Huntsville International Airport via the complimentary hotel shuttle. (B)

Solar Eclipse 2020: Argentina with Los Glaciares National Park and the Path of Totality

British Cars and the Goodwood Revival

Astronomy and Natural Wonders of Hawai’i