Savor the highlights of Sicily then travel to the “boot heel” of Apulia and continue to the breathtaking Amalfi Coast, exploring the unique history, architecture, and cuisine of each region.

Savor the highlights of Sicily then travel to the “boot heel” of Apulia and continue to the breathtaking Amalfi Coast, exploring the unique history, architecture, and cuisine of each region. 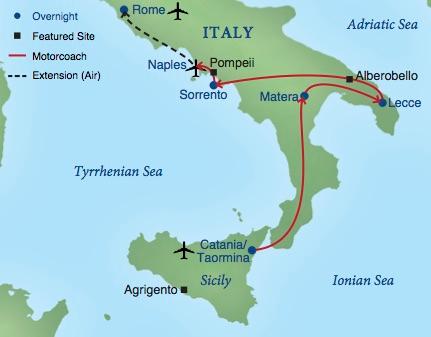 Explore the “Eternal City” at your leisure. Your tour price includes:

Empire Palace Hotel
A well-located hotel just a two-minute walk from the Via Veneto, the 110-room Empire Palace is an actual palace, built in 1870 and completely refurbished and converted to a hotel that offers a restaurant and bar, fitness center, Internet access, and laundry and dry cleaning services. Air-conditioned rooms feature private bath with hair dryer, in-room safe, mini-bar, TV, and phone. Please note that because of the unique nature of this hotel, room sizes vary.

Depart the U.S. and arrive in Catania, located on Italy’s autonomous island of Sicily. Transfer by motorcoach to Taormina and the boutique hotel overlooking the Ionian Sea. Tonight gather for a welcome dinner at the hotel. (D)

Take a walking tour of this delightful medieval town, including the spectacular ancient Greek Theater dating to the 3rd century B.C., the popular 13th-century cathedral, and grand Piazza Vittorio Emanuele.

This afternoon is at leisure, perhaps to relax by the hotel pool, visit a lovely Taormina beach, or stroll along Corso Umberto, lined with shops and restaurants. Lunch and dinner are on your own today to enjoy the varied Mediterranean cuisine. (B)

On today’s excursion visit the “Valley of the Temples,” situated in the architectural zone of Agrigento, whose Doric temples and sanctuaries date to Greek rule in the 5th century B.C. Known in its heyday as the “most beautiful city of mortals,” Agrigento’s highlight is the stunning, well-preserved Temple of Concordia (c. 430 B.C.). A visit to the museum here lends context to your explorations. Late this afternoon return to the hotel and enjoy dinner. (B,L,D)

Venture to the world’s largest active volcano, Mt. Etna. The ancients believed Mt. Etna to be the forge of Vulcan, god of fire, while modern-day Sicilians have a very personal relationship with the volcano, which frequently erupts but is seldom destructive. Centuries of lava flows have resulted in a rich, fertile landscape where citrus groves and vineyards thrive. Enjoy a small group highlight: lunch at a family-run working farm amid acres of lemon and kiwi. After returning to the hotel mid-afternoon, the remainder of the day is at leisure. (B,L)

Depart Sicily today for the mainland region of Basilicata, a day-long transfer that includes a ferry ride from Sicily to Calabria. Late this afternoon you arrive in Matera, whose historic troglodyte churches and dwellings (sassi) have been designated a World Heritage site and where the hotel is a renovated cave dwelling in the city’s historic district. (B,D)

Spend the day exploring Matera, a city of art and folklore, with its unique ancient urban structure still intact. Home to more than 100 rock churches, Matera resembles ancient Jerusalem and has been used by international film directors as a stand-in for the holy city. Following a guided walking tour, the remainder of the day is at leisure to explore independently before dinner tonight at a local restaurant. (B,D)

Depart Matera and stop in Alberobello, whose 400 or so trulli—whitewashed conical houses with grey-stone roofs—rank as a World Heritage site. Take a walking tour along the pristine cobblestone alleys, stepping inside an artisan’s workshop or trulli tipici, a recreation of an inhabited home. After lunch at a local restaurant, continue to Ostuni, the “white town” known as an architectural gem for its tightly packed whitewashed homes high on a hill above the Mediterranean. Arrive in Lecce, capital of Apulia’s southern Lecci province, in time for dinner together at the hotel. (B,L,D)

Discover the “Florence of the South,” so named for the unique decorative style for which Lecce is known: barocco leccese, the ornate and intricate sandstone carvings of cherubs and monsters, fruits and flowers that adorn local buildings from top to bottom. See Palazzo Vescovile (c. 1632), the exuberantly decorated church of Santa Croce, and the Duomo with its lovely piazza. This afternoon is at leisure before tonight’s dinner together. (B,D)

Today’s excursion takes you to the beautiful walled town of Otranto, overlooking the Adriatic. On a walking tour here see the imposing 15th-century Aragonese castle with its traditional moat and the Romanesque cathedral whose impressive wall-to-wall mosaic floor was created in 1166. Continue to a local winery for a tasting and lunch, then return to Lecce mid-afternoon. Dinner tonight is on your own. (B,L)

Depart this morning for Polignano a Mare, a historic coastal town set on limestone cliffs above the Adriatic. After lunch at a trattoria, continue to Sorrento, your home for your final nights and overlooking the Bay of Naples. (B,L)

At the evocative World Heritage site of Pompeii, take a special guided tour of the city that faced the eruption of Mt. Vesuvius in A.D. 79. Walk along ancient streets, view the remains of homes and shops, and learn about the ongoing archaeological work. Late this afternoon gather for a hands-on Neopolitan cuisine cooking lesson, followed by dinner to savor the fruits of your labors. (B,D)

Board a hydrofoil for the nearby Isle of Capri, a popular resort since Roman times. Explore cozy Capri town and visit the terraced Gardens of Augustus featuring stunning views of the azure sea. Then, enjoy free time to explore on your own before meeting a local family for lunch in their home. Return to Sorrento early afternoon. The remainder of the day is at leisure. (B,L)

Embark on a breathtaking drive along the winding, cliff-top Amalfi Coast between Sorrento and Amalfi above the glistening Tyrrhenian Sea, making stops along the way for photos. This afternoon is at leisure. Tonight, bid “arrivederci” to Italy at a farewell dinner. (B,D)