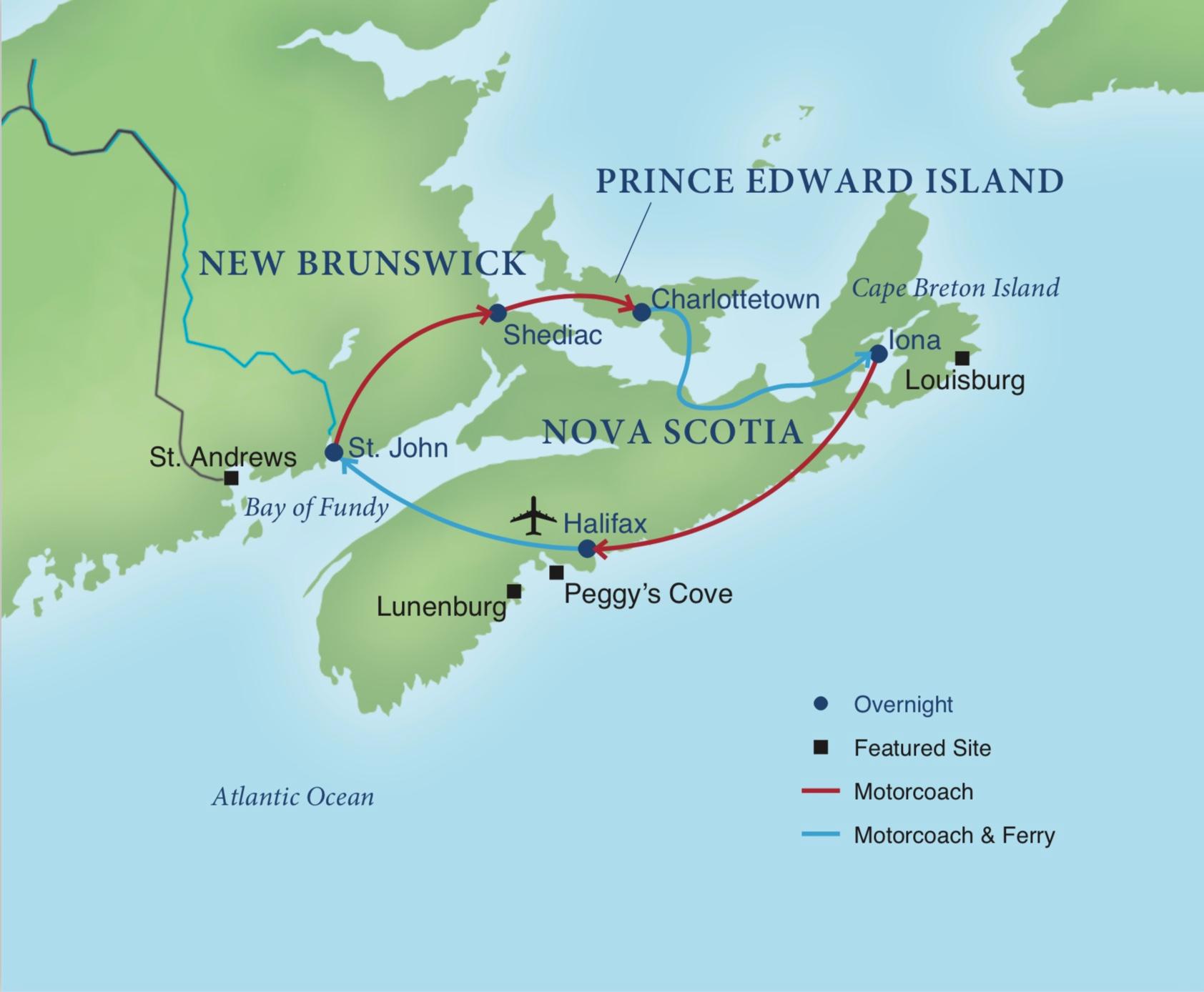 Experience history and natural splendor in Canada’s Maritime provinces on a journey to Nova Scotia, New Brunswick, and Prince Edward Island. Venture to the charming fishing village of Lunenburg and the iconic lighthouse at Peggy’s Cove. Trace Canada’s road from colonialism to independence at the Fortress of Louisbourg and the statehouses of Charlottetown, and learn about the early French Acadian settlers who deeply influenced local culture. Encounter incredible feats of nature from the wave-battered Hopewell Rocks to the stunning landscapes of Cape Breton Highlands National Park. As you travel between the islands and the mainland, get acquainted with contemporary life in the lobster capital of Shediac and the compelling cities of Halifax and Saint John.

Arrive in Halifax, the seaside capital of Nova Scotia. Check in to your waterfront hotel and enjoy the remainder of the day at leisure.

Southwestern Nova Scotia is known as the South Shore, a picturesque stretch of coast where pirates once prowled now dotted with lighthouses. Your first stop is Peggy’s Cove, a tiny hamlet set along the eastern shore of St. Margarets Bay. Here, visit Peggy’s Point Lighthouse, one of Canada’s famous landmarks, and enjoy breakfast with views of the lighthouse and the granite slabs that surround it. Follow the coastal road to Lunenburg, a World Heritage site that was settled by the British in 1753. Take a walking tour of this colorful fishing village, considered an excellent example of a planned British town, then enjoy lunch on your own. This afternoon, stop in Mahone Bay for a chance to photograph its evocative 300-year-old churches.  Gather back in Halifax for a festive welcome dinner. (B,D)

Journey north to Annapolis Valley, a verdant patchwork of fields and vineyards nestled between two mountain ranges. At the Grand-Pré National Historic site,  delve into the history and culture of the island’s early French Acadian settlers—the forebears of Louisiana’s Cajun culture—who were deported by the British in the 18th century during the French and Indian War. Stroll among a prized collection of rhododendrons, azaleas, roses, and more at the Annapolis Royal Historic Gardens, and see a reconstructed Acadian house. Then travel to the coastal village of Digby, the “Scallop Capital of the World,” where one of the options for lunch will include this Maritime delicacy. Late this afternoon board a ferry and cross the Bay of Fundy to Saint John, where dinner tonight is on your own. (B,L)

This morning, embark on a panoramic tour of Saint John, the oldest city in North America and the capital of New Brunswick. Gain insights into the city’s history and get a sense of its irrepressible spirit as you drive along King Street, the steepest main street in Canada. See landmarks including the Loyalist House, considered the city’s oldest home; the hilltop Carleton Martello Tower, built as a defense during the War of 1812; and the Old City Market, Canada’s longest running farmer’s market.

Then make your way down the coast to St. Andrew’s-by-the-Sea. From here, embark on a whale-watching cruise in the Bay of Fundy, where you’re on the lookout for the 12 species of whales that frequent the bay, including humpback, minke, and fin. (B,D)

Travel today to the head of the Bay of Fundy to tour Hopewell Rocks Provincial Park, famous for having the world’s highest tides. Long battered by the elements, the sandstone cliffs here have been whittled over millennia into unusually shaped sea stacks known as the “Flowerpot Rocks,” which range from 40 to 70 feet tall. Explore the park and its curious rock formations before continuing to Shediac, a charming vacation town with Acadian roots known as “the Lobster Capital of the World.” Here, enjoy a delicious lobster dinner aboard a working lobster boat, and learn firsthand about this industry that plays a vital role in the region’s economy. (B,L,D)

This morning cross the 8-mile-long Confederation Bridge connecting mainland Canada to Prince Edward Island (PEI). Your first stop is Village Musical Acadien, which hosts cultural events, concerts, and a community theater that celebrate the rich traditions of PEI, where many residents can trace their lineage back to the area’s first French and English settlers.

Continue on to Charlottetown, PEI’s capital and your home for the next two nights. Known as the “Birthplace of Confederation,” Charlottetown hosted the Charlottetown Conference of 1864, which paved the way for Canada’s eventual independence from Britain. On a tour of the city’s historic sites, see the neo-classical Province House National Historic Site, the seat of the PEI legislature since 1847; and visit the Confederation Centre of the Arts, a national memorial to the Fathers of the Confederation, who drafted Canada’s first constitution here in 1864. The center is also a hub of Canadian performing and visual arts. (B,L)

After a morning at leisure in Charlottetown, travel to the island’s scenic North Shore, to discover the red cliffs, white-sand beaches, gentle dunes, and green fields of Prince Edward Island National Park. Along the way, stop to tour Green Gables Heritage Place, the restored 19th-century farm and National Historic Site that was the setting for L.M. Montgomery’s Anne of Green Gables novels. Browse the interpretative exhibits at the new visitor center, and explore the lovely grounds and gardens that served as inspiration for Montgomery–to this day, the farm retains its original Victorian look. Then enjoy afternoon tea at the Dunes Studio Gallery and Café, featuring an extraordinary collection of fine Canadian craftwork, including woodworking, gold and silver jewelry, textiles, and blown glass. (B,D)

Board a morning ferry to the mainland and continue by road to beautiful Cape Breton Island.  Your first stop here is Baddeck, set on the shores of Bras d’Or Lake and home to the Alexander Graham Bell National Historic Site. On a tour of this museum complex, examine authentic models and documents created by Bell as he  conducted experiments at his home nearby. Among the pieces on display here are Bell’s hydrofoil boat, which once held the world land speed record, as well as the AEA Silver Dart, Bell’s flying machine that became the first heavier-than-air craft to be flown in Canada.  Later, settle into your hotel in the waterfront district of Sydney, Cape Breton’s largest city. (B,D)

It’s a day of outstanding scenery as you drive the world-famous Cabot Trail with a local guide. Named for Venetian explorer Giovanni Caboto (John Cabot) who landed in Atlantic Canada in 1497, this 185-mile route loops around the northern tip of Cape Breton Island, passing through the spectacular Cape Breton Highlands National Park. Discover this wild landscape of rugged cliffs, crashing surf, deep river canyons, and slopes blanketed with pines, exploring at a leisurely pace and making plenty of stops  to take in the natural grandeur. (B,L,D)

Today, visit the Fortress of Louisbourg National Historic Site, a reconstructed fortress that is now a living history museum, where re-enactors in period clothing carry on daily activities much as they would have in the 18th century. Built by the French, the fortress and its town traded hands between the British and the French several times before being burned to rubble in 1760. Delve into this dramatic history on a guided tour of the original ruins and the reconstructed portion of the fortress, which includes more than a dozen buildings and three 1700s-style restaurants. Return to Sydney and enjoy a free afternoon to explore the revitalized waterfront or visit one of the city’s museums.  Gather for dinner at a local restaurant.   (B,D)

On the way back to Halifax today, stop for lunch on your own at the Masstown Market near Truro, a produce and fish market popular with locals. You’ll have free time in lovely Halifax before celebrating your Canadian Maritimes adventure at tonight’s farewell dinner. (B,D)

After breakfast, transfer to the Halifax airport  for your flight home. (B)

Symphony on the St. Lawrence: From Québec to the Canadian Maritimes