Travel the breadth of southern Africa, from Nelson Mandela’s long road to freedom in South Africa to a unique river safari along the Chobe River aboard the exclusively chartered five-star Zambezi Queen.

Travel the breadth of southern Africa, from Nelson Mandela’s long road to freedom in South Africa to a unique river safari along the Chobe River aboard the exclusively chartered five-star Zambezi Queen. 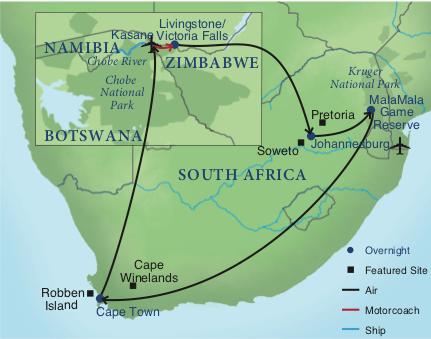 Experience the dramatic diversity of southern Africa during this special journey to South Africa, Botswana, Namibia, and Zimbabwe. Look for the “Big Five” in a private game reserve and during a unique private river safari. You’ll also gaze in awe upon breathtaking Victoria Falls and explore the cultural and political history of South Africa.​

“A world in one country,” South Africa is perhaps the most diverse, multi-faceted country on Earth. Cosmopolitan Johannesburg, known colloquially as “Joburg,” is home to one of the world’s largest urban forests, where amid some of the tallest buildings on the continent, more than six million trees flourish in the pleasant subtropical highland climate. The city has been a fast-paced center of commerce and opportunity ever since European prospectors settled here upon the discovery of its gold reef in 1886. Upon arrival, check into the Five-Star Fairlawns Boutique Hotel & Spa.

Visit historic Liliesleaf Farm, once the epicenter of the liberation movement and a refuge for its leaders and today a museum and world‑famous cultural heritage site. North of Johannesburg is the vibrant capital city of Pretoria, known for its diverse architecture, purple-blossomed jacaranda trees, and distinctly Afrikaans culture.

After lunch in a restaurant in Pretoria, visit the Voortrekker Monument, built to honor the mid‑19th-century Dutch Voortrekkers, or pioneers, who emigrated from the Cape Colony to the inland Highveld. See the Union Buildings, originally designed with two wings representing the union of the formerly divided English and Afrikaners, and the formal garden where Mandela gave his historic presidential inauguration speech (1994). This evening, enjoy a welcome reception. (B,L,R)

Commence your journey in the footsteps of Mandela in Soweto. Visit his house and the Hector Pieterson Memorial, an iconic symbol of the historic 1976 apartheid protests. Tour the evocative exhibits in Johannesburg’s Apartheid Museum.  Lunch is included in a local restaurant.

After breakfast, fly to Skukuza and drive to MalaMala Private Game Reserve, an extension of Kruger National Park. Renowned particularly for the quality of its leopard viewing, MalaMala is South Africa’s largest private “Big Five” game reserve, ideally nestled between the Sabi Sands Game Reserve and Kruger National Park, with which it shares an unfenced border for a combined six million acres. This land serves as a sanctuary for nearly 150 species of mammals, more than 500 bird species, over 100 varieties of reptiles, dozens of fish and amphibian species, and nearly 350 types of trees.

Check into MalaMala Main Camp and enjoy dinner in the lodge. (B,L,D)

Enjoy morning and afternoon game drives to observe the wildlife that roam freely between the reserves and is often found seeking refreshment along the Sand River that flows through MalaMala. (B,L,D)

After your morning game drive in MalaMala, fly to Cape Town. Check into your historic hotel. The remainder of the day is at leisure. (B)

South Africa’s “Garden City” of Cape Town is one of the world’s most beautiful cities. Founded by the Dutch East India Company as a supply station, Cape Town today is a vibrant, cosmopolitan capital city of meticulously preserved Edwardian and Victorian buildings and outstanding examples of Cape Dutch architecture. Ascend  Table Mountain by cable car (weather permitting) for sweeping city and coastal views. See the historic City Hall, where Mandela made his first public speech just hours after his release from prison.

Choose between an afternoon at leisure to explore Cape Town or tour Robben Island prison, a World Heritage Site, where Nelson Mandela and other political prisoners made strides in attaining equal rights during apartheid despite the inhumane conditions they experienced. The prison’s storied interior provides an invaluable perspective on South Africa’s social and political transformation. (B)

Visit Boulders Beach in Simon’s Town for a rare, up-close look at a protected colony of endangered African penguins nesting in sand burrows. Continue to Table Mountain National Park for a panoramic tour of the World Heritage Cape Floral Kingdom, which sustains over 4,000 plant species, and ride a funicular to lofty Cape Point for lunch and spectacular views over the Cape of Good Hope.

Experience the extraordinary Cape Winelands along the world-renowned Stellenbosch Wine Route. During a visit to the historic Vergelegen Cape Dutch Manor House, founded in 1700, enjoy a private tasting of the region’s signature Pinotage red wine. Stroll through its picturesque formal gardens underneath the vast camphor laurel trees, planted in 1705, which constitute a protected provincial heritage site.

Then, enjoy a specially arranged lunch with wine pairings at Boschendal, one of the oldest wine estates in South Africa, founded in 1685 and once owned by Cecil Rhodes. Located in the picturesque Drakenstein Valley between the Drakenstein and Simonsberg mountains, the rolling vineyards at Boschendal are planted with five different types of grape. (B,L)

This morning, fly to Kasane, Botswana, for entry into neighboring Namibia. Board the privately chartered, Five-Star Zambezi Queen for a world-class, uniquely African, small river ship experience in one of the last great untouched on Earth, with extraordinary game-viewing opportunities distinctly different from a land safari.

The Zambezi Queen is designed to navigate the Chobe River near exotic Chobe National Park, and to allow one’s eye to be drawn to the constant movement of wildlife on the riverbank—elephant, Cape buffalo, hippopotamus, giraffe, crocodile and a vast array of bird species—while cruising or at anchor. From your stylish “floating lodge,” local guides will lead you on impressive game-viewing river safaris aboard small, custom-built, private excursion boats. (B,D)

Visit a Namibian village along the river to experience the local culture firsthand, including a dance performance and artisan crafts. Continue your unique river safari and join local guides on small excursion boats for fishing, game viewing or bird watching. (2B,2L,2D)

Disembark the ship this morning and transfer to northern Botswana’s vast, diverse Chobe National Park, comprised of lush floodplains, marshland and dense mahogany and teak woodland, one of the last surviving wild areas on the continent. It is brimming with wildlife and especially so along the Chobe River, with water in plentiful supply year round. Enjoy a morning game drive where one of the densest Kalahari elephant populations (approximately 120,000) on the African continent resides, as well as lion, cheetah, leopard, zebra, impala, hyena, wildebeest, warthog and more than 450 bird species, including helmeted guinea fowl and red-billed wood hoopoes.

After lunch in a local restaurant, transfer to the legendary Victoria Falls Hotel for an evening at leisure. (B,L)

Walk the trail along the edge of thundering Victoria Falls, a World Heritage site, one of the Seven Natural Wonders of the World and among the largest waterfalls on Earth. Here, the wide Zambezi River suddenly plummets into a 355‑foot gorge, creating frothy rapids and vaulting a fine, rainbow‑hued mist high into the air, lending this breathtaking cascade its local name, Mosi-oa-Tunya—“the smoke that thunders.” See the impressive Victoria Falls Bridge, an engineering marvel that was surveyed, designed, constructed in England, then transported to the Zambezi River gorge and finally reassembled in only five years, becoming the only rail link between Zambia and Zimbabwe.

Enjoy the farewell dinner in the hotel. (B,D)

Check out of the hotel and fly to Johannesburg for your return flight to the U.S. Arrive in the U.S. the next day. (B)