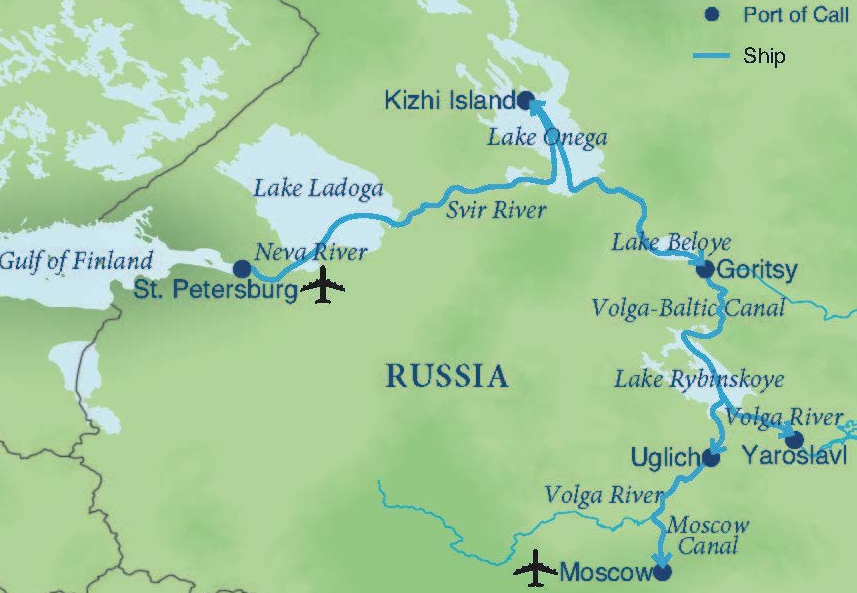 Expectations: River cruise that pulls into a pier for disembarkation, plus three nights at an upscale hotel in St. Petersburg (located within walking distance from the Hermitage) and one night at an upscale hotel in Moscow's historic city center. Excursions will be at an active pace and you will spend the entire day outside the hotel in St. Petersburg and Moscow. However, this program also features occasional leisurely river cruising. There will be some days with early morning departures (8:00 or 8:30 am.) Expect some standing and walking for long periods of time (up to two to three hours) during city tours, museum visits, and/or outdoor activities. (Guides will find places for you to sit if necessary, but this is not always available.) Walking will be over sometimes uneven terrain (e.g. cobblestone streets, city hills) and in Russia there are sites where stairs do not have handrails and elevators may not be available.

Explore the city’s World Heritage-designated historic center, where legendary landmarks are scattered across more than 30 islands and linked by 342 bridges. See exquisite examples of Russian Baroque and neoclassical architecture along the main thoroughfare, Nevsky Prospekt; the ornate Church of the Savior on Spilled Blood (Church of the Resurrection of Christ), built on Emperor Alexander II’s assassination site; and the iconic golden spire of the Admiralty. Visit 19th-century St. Isaac’s Cathedral, whose striking gilded cupola crowns the city’s skyline, to admire its dazzling interior of malachite and lapis lazuli. Tour St. Petersburg’s oldest edifice, the Peter and Paul Fortress, built in 1703 to guard the country’s only outlet to the Baltic Sea.

Later, visit the imperial compound of Tsarskoye Selo (Pushkin) and the elaborate Baroque Catherine Palace, a World Heritage site. See the jewel-encrusted Amber Room, laden with six tons of solid amber, deftly carved and framed in gold leaf and said to be the “Eighth Wonder of the World.” Stripped and confiscated by the Nazis in 1941 during the siege of Leningrad, it was meticulously reconstructed over 25 years to honor St. Petersburg’s 300th anniversary.

This evening, you may choose to attend an optional Russian folklore performance in Nicholas Palace (schedule to be determined). (B,L)

Enjoy a specially arranged early entrance to the  World Heritage-designated State Hermitage Museum, the former tsarist palace of Catherine the Great and among the largest and most respected museums in the world. Its prestigious collections form a comprehensive history of Western and European art, with over three million artifacts. Tour the new halls of the State Hermitage Museum’s General Staff Building to view priceless 19th- and 20th-century French Impressionist and Post-Impressionist works, including 74 masterpieces presumed “lost” in a storeroom during World War II.

This evening, choose to attend an optional Russian ballet performance (schedule to be determined). (B)

Visit the World Heritage-designated site of Peterhof, commissioned by Peter the Great to rival Versailles, and tour the Grand Palace and the elaborately landscaped grounds of the Peterhof Gardens, encompassing two centuries of imperial style, executed to perfection. Enjoy lunch in the Lower Park where the Grand Cascade comprises a symphony of over 150 gilded fountains.

Embark the deluxe, Volga Dream this afternoon and attend the Captain’s Welcome Reception this evening. (B,L,R,D)

Admire the passing wilderness of serene meadows and virgin pine and birch forests lining the banks of the mighty Neva River along the shores of Lake Ladoga, Europe’s largest lake. This afternoon, call at charming Svirstroy, a riverside village evoking a pastoral way of life. See the historic Lodeynoe Pole, where Peter the Great established the Olonets Shipyard, birthplace of the Baltic Fleet. Visit the home of a local village resident to enjoy tea and Russian pies before continuing along the gleaming Svir River between Lake Ladoga and Lake Onega. This evening, attend a lecture on board the ship by Pavel Paazhchenko, acclaimed interpreter for former Soviet President Mikhail Gorbachev and Soviet Foreign Minister Eduard Shevardnadze. (B,L,D)

Early this morning, be on deck for the unforgettable approach to Kizhi Island, then tour the World Heritage-designated Kizhi Pogost, a remarkable open-air museum of 18th-century Karelian and north Russian wooden architecture, with structures that date to the 14th century. Admire the 120-foot-tall Church of the Transfiguration, considered the world’s tallest entirely wooden building and an architectural masterpiece, featuring 22 cupolas notched together without a single nail.

Cruise scenic Lake Onega, with over 1600 small islands, in view of the beautifully untouched Karelian countryside, home to both Finns and Russians. (B,L,D)

Along the shores of Lake Beloye, admire rural communities continuing the long-standing traditions of Old Russia. From tranquil Goritsy, transfer to the Kirillo-Belozersky Monastery, founded in 1397, and see its collection of paintings, early printed books and pictorial embroidery. It is said that Vasily III prayed here for an heir, and soon after, his wife Elena gave birth to the future Ivan the Terrible, Russia’s first tsar.

Catch glimpses of a bygone era along the Sheksna River as you pass by rustic family farms and quaint dachas, traditional Russian wooden cottages. This evening, enjoy a dinner of Russian delicacies followed by a specially arranged sampling of Russian vodkas. (B,L,D)

Cruise Lake Rybinskoye, surrounded by scenic wilderness. Dock in Yaroslavl, the oldest city on the Volga River and one of the “Golden Ring” of fortified 11th- to 15th-century cities and villages built to encircle Moscow. This World Heritage site is renowned for its 17th-century stone churches crowned with painted onion domes and soaring turrets.

Stroll along the river to the exquisite Church of Elijah the Prophet, an architectural masterpiece in the heart of the Old Town, built by local fur trappers in 1650 and replete with dazzling, well-preserved frescoes. See the elegant 12th-century Monastery of the Transfiguration, which later became Russia’s richest and most fortified monastery. (B,L,D)

Arrive in the “Golden Ring” city of Uglich and walk to the magnificent Church of Prince Dimitri-on-the-Blood, built-in 1692 on the site where Ivan the Terrible’s young son met his tragic demise. Admire its cluster of salmon-hued turrets capped with shimmering blue and gold onion domes and the interior’s elegant frescoes. See the stately five-domed Cathedral of the Transfiguration, built along the Volga River in 1713.

This afternoon, cruise the great Volga River, the main artery of the Russian heartland for over a millennium, and into the Moscow Canal, which provides Moscow access to the White, Baltic, Caspian, Azov and Black Seas.

This evening, attend Pavel Palazhchenko’s second lecture on board followed by the Captain’s Farewell Reception. (B,L,R,D)

Arrive in Russia’s illustrious capital city, which has embodied the nation’s heart and soul for over 850 years. Disembark the ship for a tour of Moscow featuring the Cathedral of Christ the Redeemer, the monument of Peter the Great, the renowned Bolshoi Theatre and expansive views of the city from University Square.

Explore Moscow’s cultural and historical treasures during a visit to the World Heritage-designated Kremlin, the historic heart of the city and home of Russia’s present-day parliament, the Duma. Visit the cathedrals of Cathedral Square, a monument to 15th- and 16th-century Russian architecture, and see the tombs of Russia’s rulers from Ivan I (1342-41) to Tsar Ivan V (1682-96), Peter the Great’s predecessor. Walk through magisterial Red Square, a World Heritage site where both Romanov tsars and Soviet commissars have flexed their power, and admire the grandeur of 16th-century St. Basil’s Cathedral, one of Russia’s most striking Orthodox monuments and a national symbol.

Check into the Five-Star Marriott Royal Aurora Hotel and enjoy dinner in the hotel this evening. (B,L,D)

Continue on the Moscow post-tour extension or transfer to the airport for your flight to the U.S. (B)