Learn about the traditions, legends, and archaeological finds of Mesa Verde National Park and Chaco Culture, both World Heritage sites, and other significant sites of the Southwest during this new tour.

Learn about the traditions, legends, and archaeological finds of Mesa Verde National Park and Chaco Culture, both World Heritage sites, and other significant sites of the Southwest during this new tour. 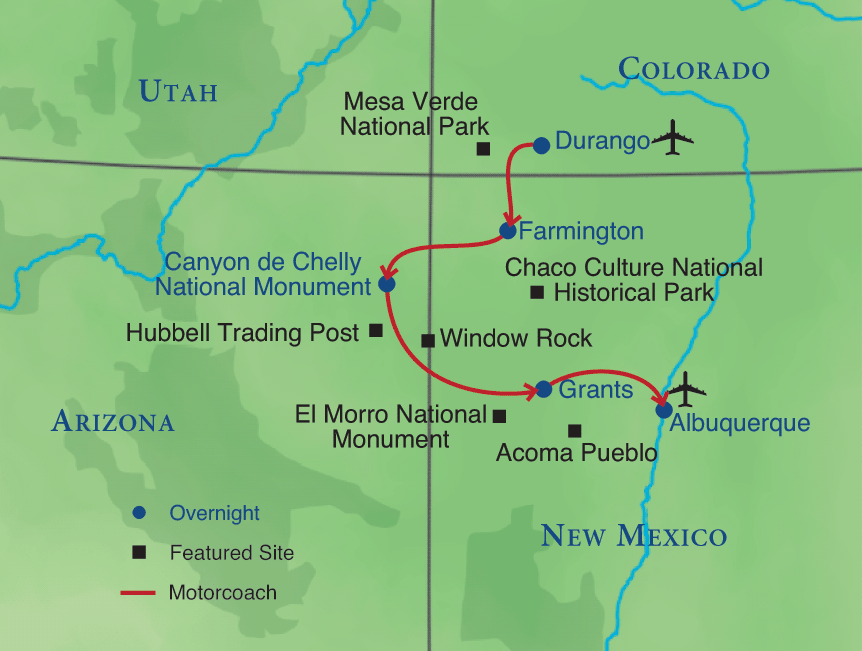 For over 2,000 years, the Ancestral Puebloan people occupied a vast region of the Colorado Plateau in the Southwest’s Four Corners area. Here, they built highly sophisticated communities on mesa tops, canyons, and cliffs, where they carried out ceremonies, agriculture, and trade. Learn about the traditions, legends, and archaeological finds of Mesa Verde National Park and Chaco Culture, both World Heritage sites, and other significant sites of the Southwest during this unique tour.

Arrive during the day into Durango, Colorado. Check-in to the historic Strater Hotel located in the charming downtown. Visit the Center for Southwest Studies in Durango, which holds a museum, library, archives, and records for Fort Lewis College. The center’s museum is home to important collections of Navajo, Pueblo and Hispanic textiles along with baskets, pottery, sculpture, paintings and historic artifacts representing the Southwest’s diverse and dynamic heritage. While here gather with a museum specialist for remarks and a short tour.

This evening gather in the hotel for a welcome reception and opening remarks by your Smithsonian Journeys Expert. (R,D)

After breakfast, depart for Mesa Verde National Park, established in 1906 to preserve and interpret the archeological heritage of the Ancestral Pueblo people who made it their home for over 700 years from 600 AD to 1300 AD. Today the park protects nearly 5,000 known archeological sites including 600 cliff dwellings, some of the best preserved in the United States. Marvel at Cliff Palace, the park’s largest cliff dwelling from several viewpoints. Later, enjoy spectacular views from Point Park Trail, at 8,572 feet it is the highest point on the main park road. Late in the day arrive in Farmington, New Mexico. (B,L,D)

Depart Farmington in the early morning for remote Chaco Culture National Historical Park, passing through Navajo Nation tribal land on the way. The canyon was central to thousands of people between 850 AD and 1250 AD though there is evidence of human occupation beginning in 900 BC. Marvel at the massive buildings of the Ancestral Puebloan people and learn more about their complex organizational and engineering abilities. Stop at the Visitor’s Center and then Pueblo Bonito, the most thoroughly investigated and celebrated cultural site in Chaco Canyon. Pueblo Bonito was planned and constructed in stages over hundreds of years. Chaco Canyon is also one of the few protected areas in the San Juan Basin and is an island of biodiversity, home to plants including a variety of wildflowers and pinyon-juniper woodlands and also wildlife including bobcats, badgers, porcupines and a diverse bird population. A picnic lunch will be provided. Return to Farmington late in the day for a group dinner and an evening at leisure.  (B,L,D)

Depart Farmington, New Mexico and cross into northeastern Arizona for Canyon de Chelly National Monument. As you drive through Navajo Nation lands of the Four Corners region pass Shiprock, an erosional remnant of the throat of a volcano (volcano breccia). Learn more about Shiprock and why it holds great significance to the Navajo people. Arrive at Canyon de Chelly, also located fully on Navajo Nation lands which has been inhabited, uninterrupted, for nearly 5,000 years, longer than anywhere else on the Colorado Plateau. Navajo families make their home in the canyon, raising livestock and farming the land. Stop at several viewpoints as you make your way into the canyon, then stop for a luncheon of southwestern fare. This afternoon hike three miles (round trip) to White House Ruin, a trail which descends nearly 600 feet down the cliff on the south side of the canyon. Cross Chinle Wash and end beside one of the most famous ancient dwellings within the monument, a two-level structure with one part on the valley floor and the other 50 feet up in an alcove. Continue to Thunderbird Lodge, located within the monument, for check-in. In the late afternoon drive to Spider Rock, a sandstone spire that rises more than 700 feet from the canyon floor.  (B,L,D)

Embark on a full day four-wheel-drive excursion led by a Navajo guide, who’ll share stories and knowledge of their ancestral home. Millions of years of land uplifts and stream cutting created the colorful sheer cliff walls of the canyon. Natural water sources and rich soil provided a variety of resources including plants and animals that have sustained families for thousands of years. Drive along Canyon Del Muerto and view landmarks like Fortress Rock and Antelope House Ruin, where colored drawings of antelope created in the 1830s are side by side with Anasazi creations. Further up the canyon are farms, orchards and fields still tended to today. Enjoy a traditional vegetarian Navajo lunch. Return to the lodge late in the day for a group dinner.  (B,L,D)

Walks/Hikes: Short walks and hikes at scenic stops during the 4 wheel-drive tour

Depart the lodge and Canyon de Chelly National Monument for Hubbell Trading Post National Historic Site in Ganado, Arizona, where trading has been taking place since 1878. Browse works by local Navajo artists as well as wares for sale including pottery, blankets and jewelry. Continue to Navajo Tribal Headquarters at Window Rock, Arizona and enjoy a guided tour and talk at the Navajo Nation Museum and Library. Then take a short hike at El Morro National Monument to view petroglyphs and Spanish inscriptions carved in the rocks. Continue to Grants, New Mexico and after check-in at the hotel, depart for dinner at a local steakhouse.  (B,L,D)

From Grants drive to Acoma Pueblo, a National Historic Landmark built atop a 367-foot sandstone mesa, it is  one of the oldest communities in what is now the United States. Join a member of the community for a tour and more about the settlement’s history. Four communities make up the pueblo village today including Sky City (Old Acoma), Acomita, Anzac, and McCarty’s. Continue east to Albuquerque and arrive at the hotel late in the afternoon. There will be an optional visit to the Pueblo Indian Cultural Center or you may relax at the hotel or step out for shopping in Old Town Albuquerque. This evening gather for a festive farewell dinner. (B,L,D)

After breakfast, depart for the short drive to Albuquerque International Sunport for flights home.  (B)