Step back in time amid the mystical Neolithic and Bronze Age sites of England and Ireland, delving into the secrets of Stonehenge, Newgrange, and beyond in the company of archaeologists and local experts.

Prehistoric Mysteries of England and Ireland

Stonehenge to the Aran Islands

Step back in time amid the mystical Neolithic and Bronze Age sites of England and Ireland, delving into the secrets of Stonehenge, Newgrange, and beyond in the company of archaeologists and local experts. 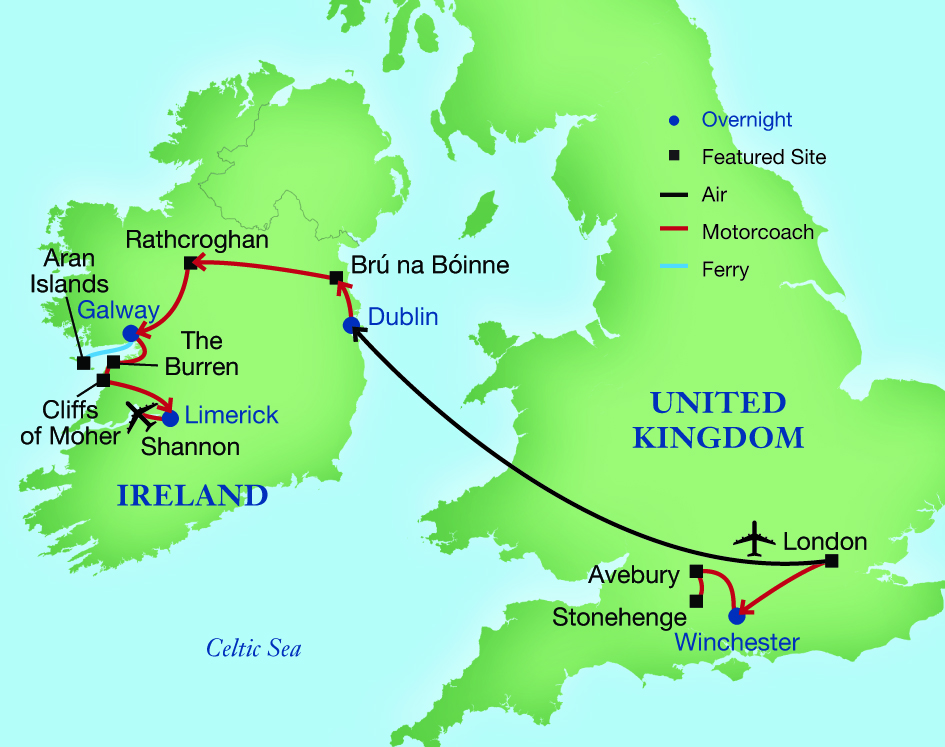 Venture back in time to an age of Celts and Druids, ancient kings and pagan rituals, as you make your way from England’s Neolithic standing stones to the prehistoric sites of Ireland’s west coast. In the company of local experts, including archaeologists and authors, delve into the mystical origins of the megalithic monuments of Avebury and Stonehenge and Ireland’s World Heritage-listed passage tombs. Encounter the fascinating Cashel Man and trace the origins of Halloween in Rathcroghan. Conclude your journey on Ireland’s glorious west coast, discovering a Celtic ring fort on the cliffs of the Aran Islands and prehistoric relics scattered across the stunning landscapes of County Clare.

Days 1-2 — Depart the U.S. and for London, England/Hampshire

Arrive in London after your overnight flight and travel west to the county of Hampshire. Your home here is a beautiful 17th-century country house set among rural Hampshire countryside. Gather for a welcome reception and dinner tonight. (R,D)

The rolling plains and wooded vales of Wiltshire harbor an astounding number of ancient relics, from mysterious Neolithic standing stones to Bronze Age burial mounds and beyond. Spend today discovering some of the area’s most famous sites: the megalithic monuments of Avebury and Stonehenge, which share a World Heritage designation. At Avebury, explore the largest stone circle in the world, excavated in the early 20th century by archaeologist Alexander Keiller. Discuss the site’s significance and meaning with a local expert, and examine artifacts found here at the Alexander Keiller Museum. See Silbury Hill, Europe’s largest manmade prehistoric mound, and visit the Neolithic chambered tomb at West Kennet Long Barrow. Then encounter legendary Stonehenge at the end of the day, as the regular visitors are beginning to leave. Gain insights into the latest discoveries and theories about the site on a tour with a local expert. Visit the adjacent sites of Woodhenge and Durrington Walls, where the workers who built Stonehenge are believed to have lived. (B,D)

Travel to London Heathrow and catch a flight to Dublin. Enjoy an introduction to the ancient wonders of the Emerald Isle on a specially arranged visit to the archaeology building of the National Museum of Ireland. Here, an archaeology expert offers an in-depth look at Early Bronze Age gold and jewelry, Iron Age “bog bodies,” and prehistoric weapons and utensils. Encounter Cashel Man, a 4,000-year-old bog body discovered buried deep in peat in 2011. Settle into your hotel before gathering for dinner. (B,D)

Day 5 — Bend of the Boyne and Dublin

Journey north to an area known as Brú na Bóinne, or the “Bend of the Boyne,” where three major megalithic passage tombs and dozens of smaller prehistoric monuments dot the banks of the River Boyne. Dating back some 6,000 years, Brú na Bóinne appears to have been built for social as well as religious purposes. Take a guided tour of the nearby Hill of Tara, a Stone Age site later known as the seat of Ireland’s high kings. Browse an interpretive exhibit at the visitor center, and then venture into the inner chambers of the site’s most important passage tombs: Newgrange and Knowth. Admire the engraved kerb stones and tombs’ complex structure, designed to align with the sun. Return to Dublin this afternoon. (B)

Cross Ireland on your way to Galway, a vibrant center of Irish music and art on the west coast. Stop to visit the Iron Age site of Rathcroghan, where more than 240 archaeological ruins, including burial mounds, ring forts, and temple sites, mark the ancient kingdom of Connaught. In a cave here once considered the gateway to the underworld, the tradition of Halloween is believed to have taken root. Continue to Galway and enjoy time to explore the city on your own before meeting your Smithsonian Journeys Expert for a lecture and dinner. (B,D)

Take the ferry to Inishmore, the largest of the Aran Islands. Isolated from the mainland and encrusted with fossil-rich limestone, these islands are part of the Gaeltacht, where Irish is the principal language and age-old traditions hold strong. Get acquainted with a timeless way of life as you explore the island and walk up to the mystical Celtic ring fort of Dún Aonghasa, perched at the edge of a 300-foot cliff. Return to Galway for an evening of leisure. (B)

Day 8 — The Burren, Cliffs of Moher, and Limerick

Venture to the rugged landscapes of County Clare, where prehistoric sites are scattered among some of Ireland’s most iconic natural wonders. Join a local author for a walk from the famous Poulnabrone portal tomb into the heart of the otherworldly Burren. As you make your way across the moon-like limestone slabs, encounter a Stone Age megalithic tomb, a Bronze Age cairn, and a Bronze Age fulachta fiadh, or burned mound. End the day at the spectacular Cliffs of Moher, a five-mile stretch of vertical cliffs that tower more than 700 feet above the crashing sea. Arrive in Limerick and toast your journey into prehistory at a farewell dinner tonight. (B,D)

After breakfast, transfer to the airport in Shannon for your flight home. (B) 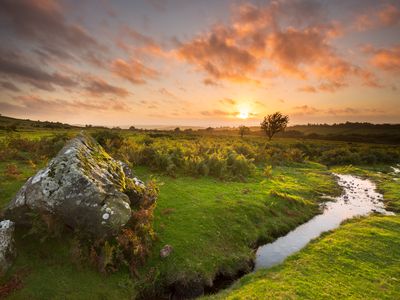