During this special Cultural Stay, immerse yourself in the “City of Light” and see it through the lens of the African American experience. Among other highlights you’ll enjoy insightful thematic tours that focus on esteemed African American expats, authors, activists, and musicians; a meeting with an award-winning novelist; and a jazz concert.

During this special Cultural Stay, immerse yourself in the “City of Light” and see it through the lens of the African American experience. Among other highlights you’ll enjoy insightful thematic tours that focus on esteemed African American expats, authors, activists, and musicians; a meeting with an award-winning novelist; and a jazz concert. 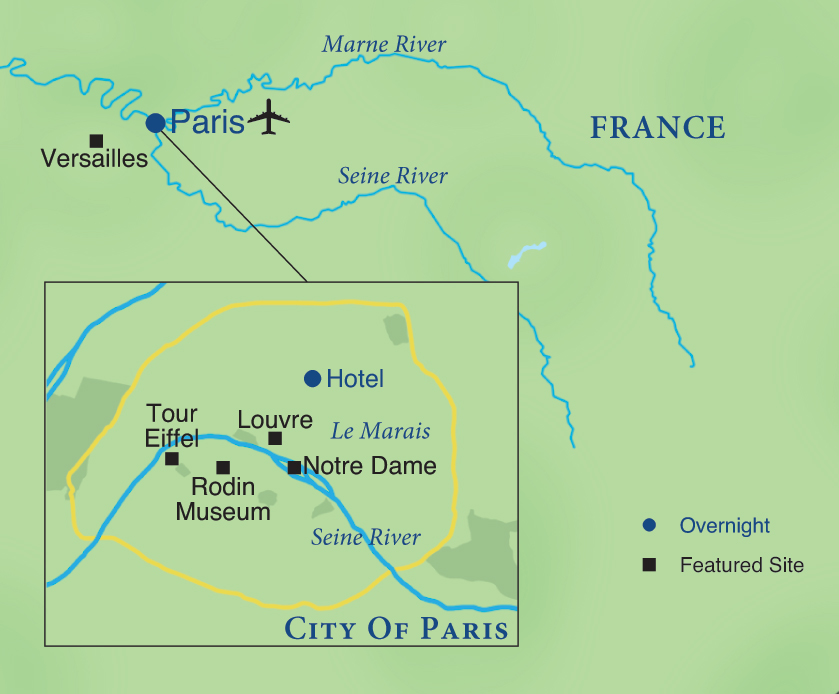 In the early 20th century, Paris became a center for creative spirits seeking a welcoming artistic milieu. After both World Wars, African Americans turned to Paris to embrace the open French culture, and in the process made a lasting impact on the cultural world through their music, writing, and art. During this cultural stay at the centrally located Hotel Les Jardins du Marais, immerse yourself in the “City of Light” and see it through the lens of the African American experience.

Depart on your transatlantic flight to Paris, France.

Arrive at Charles de Gaulle International Airport and transfer to Paris and the upscale, centrally located Hotel Les Jardins du Marais. Upon arrival at the hotel, you’ll receive a Welcome Package with maps and general information about Paris. Your Smithsonian Journeys Travel Director will be available this afternoon and throughout the program for suggestions regarding independent activities.

This afternoon you can join tour staff for a short orientation walking tour of the neighborhood surrounding the hotel. This evening gather for a welcome reception followed by an introductory talk by your Smithsonian Journeys Expert. Dinner will follow at a popular local restaurant. (R,D)

A full breakfast will be served each morning at the hotel. Afterward, set out on a fascinating excursion that provides a rich overview of black history in Paris. Your local guide will talk about the places expatriates like W.E.B Dubois and Sidney Bechet frequented. Travel along fashionable avenues like the Champs-Elysees and up the narrow hilly streets of Lower Montmartre, while glimpsing the Luxembourg Gardens and the Latin Quarter, abuzz with students. This experience reveals black heritage and its connection to the Louvre, the Madeleine Church and the Paris Opera House.

The tour provides an in-depth themed discussion at the Josephine Baker memorial marker in the south end of the city, and the memorials and statues in Paris’ north end that celebrate three generations of Alexandre Dumas' family and how they illustrate France's relationship with slavery and race. Lunch will be served at a local restaurant. Afterward, cruise on the River Seine, through the heart of Paris. While gliding along you’ll see legendary Paris attractions such as Notre Dame Cathedral and pass beneath elegant bridges like the Pont Neuf. In the early evening join fellow travelers for a casual discussion of the day’s discoveries in the Smithsonian Journeys Travelers Corner. (B,L)

Gather in the hotel this morning for an exclusive screening of the film, Paris Noir: African Americans in the City of Light, then participate in a question and answer period with the filmmakers.

Later, follow in the footsteps of those who were a part of the vibrant black community of the Lower Montmartre during the 1920s. Learn about the dawn of the Jazz Age in Paris and black musicians like the Harlem Hellfighters. See the sites of famous nightclubs run by the singer Ada “Bricktop” Smith; Eugene Bullard, World War I flying ace and drummer; and the dancer and entertainer Josephine Baker. It was during this time that African American culture blended with popular French culture that has endured for decades. Lunch is served at a restaurant in Montmartre. Afterward, visit the Montmartre Museum, located near  Sacre Coeur, and housed in a quaint 17th-century residence. See art collections that depict the history of Montmartre during the 19th and 20th centuries including pieces by Renoir, Toulouse-Lautrec, and Dufy.

Gather this evening for a visit to St. Germaine-des-Pres and the Latin Quarter where an expert local guide will point-out the iconic clubs and caveaus where young French jazz musicians were nurtured by African American artists. Then enjoy a festive dinner and a live jazz concert.  (B,L,D)

Today enjoy the many delights of French gastronomy. Ernest Hemingway famously wrote that Paris was a “moveable feast” and on this culinary walking tour, you’ll sample a basketful of delightful French food specialties. In the afternoon, join a local expert for a guided tour of the National Museum of the History of Immigration devoted to the history of immigration and diversity in France from the early nineteenth century to the present. Built in 1931 for the French International Colonial Exposition, the building's imposing edifice is decorated with bas relief sculptures that depict French immigration and is of particular architectural interest. (B)

Travel out of Paris this morning to the Palace of Versailles, a World Heritage Site and the principal royal residence of France from 1682, under Louis XIV, until the start of the French Revolution in 1789, under Louis XVI. See the Hall of Mirrors, where the Treaty of Versailles was signed in 1919 formally ending World War I. An expert local guide will escort you through the palace on this fascinating tour. Enjoy lunch independently and then time to explore the palace further at your own pace. (B)

This morning, gather for a presentation by American expatriate Jake Lamar. Mr. Lamar is an award-winning writer and a transplant from Bronx, NY. During his presentation, he’ll discuss his experiences in Paris, where he’s lived for several years. Mr. Lamar has written several novels, a play, a memoir, and many short stories. Afterward, an excursion will take you to the Left Bank, where the African diaspora flourished. Later, enjoy a walking tour focusing on such iconic symbols of greatness — the Pantheon and the Sorbonne. This enlightening walk explores the explosion of Black consciousness and expression through the Négritude Movement, Harlem Renaissance writers, African and Caribbean intellectuals. On the esplanade of the Sorbonne, your resident guide will reveal the far-reaching significance of the First International Congress of Black Writers and Artists held in 1956, and featuring such speakers as Richard Wright, Léopold Senghor, Aimé Césaire, and Frantz Fanon. Lunch will be served at a local restaurant and the balance of the day is free of planned activities. This evening join fellow travelers in the Smithsonian Journeys Travelers Corner for lively conversation and camaraderie. (B,L)

Let your interests be your guide as you follow your own path and explore Paris on your own today. Your local Smithsonian Journeys Travel Director will be on hand to answer questions or help with planning your day. This evening, gather with fellow travelers for a farewell reception followed by dinner at a local restaurant. (B,R,D)

After breakfast, transfer to Charles de Gaulle Airport for your return flight to the U.S (B)