From Imperial Cities to the Sahara

Our trip wasn't a "trip" rather, it was an experience! Every logistical detail was attended to with complete professionalism. The quality of our accommodation, travel, and restaurants as well as entertainment and education was unrivaled. I have told all my friends how impressed I was with this experience! 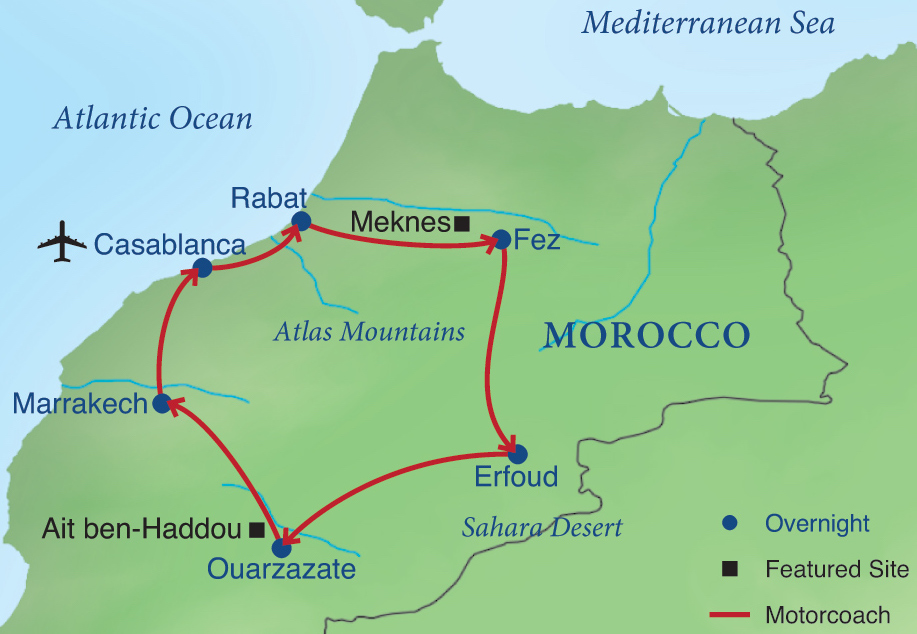 Morocco is a land of dramatic contrasts—vast deserts and snowcapped mountains, ancient ruins and sacred mosques, and imposing fortresses and spirited markets. Here, one can see the influence of Phoenicians, Romans, Berbers, Jews, Arabs, and the Portuguese and French.

Our trip wasn't a "trip" rather, it was an experience! Every logistical detail was attended to with complete professionalism. The quality of our accommodation, travel, and restaurants as well as entertainment and education was unrivaled. I have told all my friends how impressed I was with this experience!

After arriving in Casablanca, the commercial center of Morocco (and of all North Africa), proceed to Rabat, and check into your hotel near famed Hassan Tower. Tonight enjoy dinner at the hotel. (D)

One of Morocco’s four ancient capitals, or imperial cities, Rabat is the present-day capital, at once historic and contemporary as you discover on today’s tour. Visit the fortified Kasbah of the Oudaias, the peaceful Andalusian Gardens, and the necropolis of Chellah, built on ancient Roman ruins. Cross the river to Sale for lunch in a private home followed by a visit to the new Mohammed VI contemporary art museum and a walk through the medina (old city). Late afternoon return to your hotel before enjoying dinner together at Dinarjat, an acclaimed restaurant in Rabat’s Old Town. (B,L,D)

Depart Rabat for Fez this morning, stopping along the way in Meknes, Morocco’s youngest imperial city (and World Heritage site). Visit the Bab el Mansour gateway and the ruins of the imperial stables before lunch in a local restaurant. Continue to the ancient Roman ruins at the site of Volubilis, known for its intricate and colorful mosaics. Upon arrival in Fez check into your elegant hotel adjacent to the medina, another World Heritage site. (B,L,D)

Return to the hotel for lunch and some time at leisure, then tour the old mellah (Jewish quarter) and its 17th-century synagogue, the royal gates, and the Museum of Fez. Tonight enjoy a private dinner at an intimate family-run riad in Fez. (B,L,D)

This morning return to the medina to discover some hidden treasures, including the Blue Gate; the medieval school of Bouanania; the 12th-century home of Jewish scholar Maimonides; and the Museum of Fez. Also, visit the traditional quarter to watch artisans craft the acclaimed Fez pottery and ceramics. After lunch, enjoy a concert of enchanting Arabic music. Have free time to relax late afternoon before dining this evening at the hotel’s restaurant. (B,D)

Cross the fertile plains beyond Fez to the Middle Atlas mountain range. Densely forested slopes of cedar, cork, and pine give way to arid steppes on these historic routes, where Berbers once fled Arab invaders. Stop in the small town of Midelt for lunch, then cross the Ziz River, passing rows of sky-scraping palm trees and fortified villages before reaching your kasbah-style hotel in Erfoud late in the day. Dinner tonight is at the hotel. (B,L,D)

Visit the city of Rissani and explore its 18th-century ksar, a virtually impenetrable warren of alleys. Conclude the day with a sunset excursion to the breathtaking sand dunes at Merzouga. In the enormous silence of the Sahara Desert, watch the sunset over the endless dunes from atop a camel. (B,L,D)

One impressive scene unfolds after another on today’s journey to the snowcapped High Atlas. See the terraced riverside village of Tinehir and spectacular 984-foot Todra Gorges, home to rare bird and plant species. Following lunch, visit El Kelaa des Mgouna, Morocco’s “rose capital,” then set out on the fabled “Route of a Thousand Kasbahs” ancient caravan route, a region of fortresses with elaborately decorated façades. Spend the evening in the town of Ouarzazate the “door of the desert”. (B,L,D)

En route to Marrakech, tour Ait ben-Haddou, a World Heritage site. In its old section, deep red kasbahs are packed together so tightly they appear to be a single unit. Descend from the High Atlas, passing through typical fortified villages with stone houses and earthen roofs. Arriving in Marrakech in the late afternoon, enjoy some leisure time before dinner at the hotel. (B,L,D)

The city of Marrakech is an alluring oasis with a temperate climate, distinct charm, and fascinating sites. Travel by horse-drawn carriage from Menara Park to Majorelle Garden, a private botanical garden with 15 species of birds native to North Africa and known for its cobalt blue accents. Visit the newly renovated Berber Museum, with art and artifacts reflecting Berber culture in Morocco. After lunch on your own, embark on a walking tour of the medina, ending at Djemaa el Fna Square, a World Heritage site and the heart of Marrakech, crowded with snake charmers, entertainers, storytellers, musicians, and sellers of fruits and spices. Dinner tonight will be at a local restaurant in the city’s Old Town. (B,D)

Today’s touring includes the Koutoubia Mosque with its distinctive 282-foot minaret visible from miles away, the ruins of the 16th-century Palais El Badii, and the beautiful Andalusian-style El Bahia Palace. Return to the hotel for a buffet lunch and afternoon at leisure. This evening, enjoy an exciting meeting when you visit the home of a local imam to discuss the Muslim faith. Dinner tonight is on your own. (B,L)

Return to Casablanca and take a city tour in the afternoon, featuring the harbor area, city hall and tribunal, and the magnificent Hassan II Mosque. Tonight celebrate your Moroccan adventure during a farewell dinner at a festive and lively restaurant. (B,D)

Depart Casablanca for the U.S. on individual flights. (B)

Sailing the Coast of Iberia