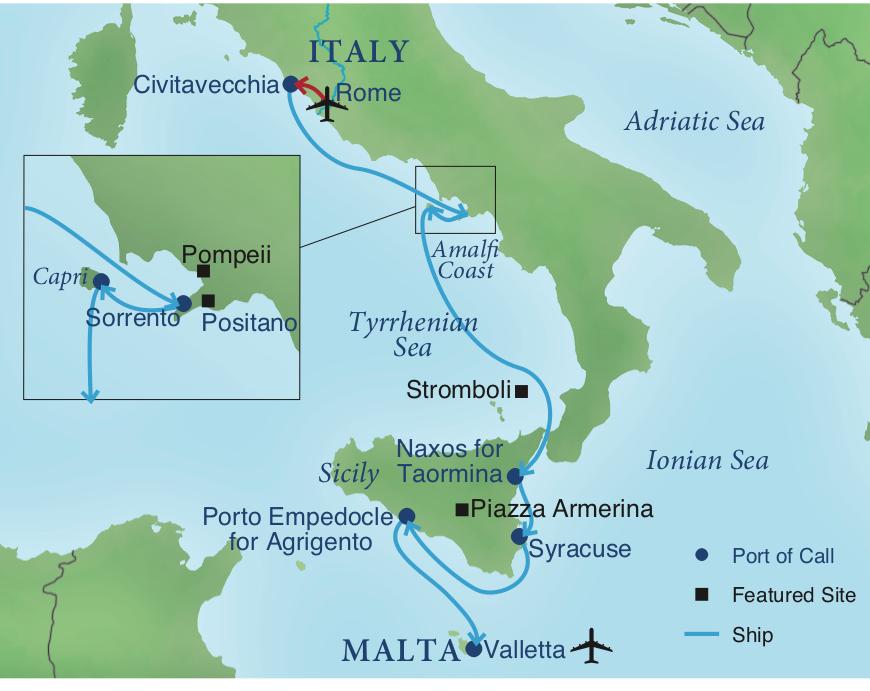 Capital of the ancient Roman Empire and a World Heritage site, the “Eternal City” of Rome is the perfect start to your Voyage of Ancient Empires. This majestic city showcases spectacular landmarks from its centuries as a center of power, culture, and religion. See its ancient monuments, including the Colosseum and the Roman Forum. Enjoy a tour of St. Peter’s Basilica, the Vatican Museums, including the recently reopened Raphael Rooms, and the Sistine Chapel. Accommodations for three nights are in the deluxe The Westin Excelsior Rome Hotel, minutes from Piazza di Spagna and the Villa Borghese gardens, and located on the most well-known street of the capital, the famous Via Veneto.

The magnificent fortified city of Valletta was founded in 1566 by the French Grand Master of the Order of the Knights St. John, after their victory over the Ottomans in the Great Siege of Malta. This World Heritage site was one of the world’s earliest planned cities and today an open-air museum of architecture from the 16th century onward, including splendid examples of baroque, neoclassical, and modern styles. Visit the ornate 16th‑century St. John’s Co‑Cathedral, inside the church, enjoy seeing masterpieces such as Caravaggio’s The Beheading of Saint John the Baptist and Flemish tapestries designed by Sir Peter Paul Rubens. Tour the 18th-century Palazzo Parisio, known as a “miniature Versailles” for its magnificent gardens and interior, featuring a grand staircase of Carrara marble. Visit Mdina, Malta’s medieval capital, and the nearby domed Mosta Church. This island influenced by so many ancient cultures—from the Phoenicians and Carthaginians to the Romans, French and British—is a fitting end to the Mediterranean’s ancient empires. Accommodations are for two nights in a deluxe hotel, offering convenient access to Valletta’s highlights.

Pre-Cruise and Post-Cruise Options are available at additional cost. Details will be provided with your reservation confirmation.

Arrive in Rome, the former seat of the Roman Empire, today the historic heart of Italy and a World Heritage site. Transfer to Civitavecchia to embark the ship. (D)

Today you will explore Pompeii. Discovered and excavated 17 centuries after the tephra of Mt. Vesuvius engulfed Pompeii in A.D. 79, the incredibly well-preserved ruins of this ancient Roman city are today a World Heritage site. The walking tour provides an intimate look into the daily rituals of Roman life during the reign of Emperor Titus. See the impressive amphitheater, the house of the wealthy Vetti family and the extraordinary Temple of Jupiter.

Return to Sorrento for an afternoon at leisure. An outpost of the ancient Roman Republic, today this quaint seaside town is one of the most scenic in Italy, the gateway to Mt. Vesuvius and the ancient ruins of Pompeii, and the limoncello capital of the world. Sorrento was built into picturesque cliffs high above the Tyrrhenian Sea with brightly hued buildings and abundant lemon and orange groves. Attend the Captain's welcome reception this evening. (B,L,R,D)

Visit Italy’s spectacular World Heritage-designated Amalfi Coast is legendary for its natural wonders and dramatic cliffs dotted with secluded villages, opulent villas, and sun-kissed beaches that epitomize the allure of the Italian Mediterranean seaside. Enjoy time on your own in the lovely village of Positano—frequented by Picasso, Toscanini, and Bernstein, popularized by John Steinbeck and now a favorite resort of international luminaries.

Continue to dramatic Capri. Legend has it that along these shores Homer’s Odysseus resisted the alluring call of the sirens. Enjoy a walking tour through the Piazzetta, the bustling center of Capri; ancient perfumery of the Certosa Monastery, where methods once used by the Carthusian monks are still used for the production of the Carthusia perfumes today, and visit the Augustus Gardens, a series of flower-filled terraces that afford breathtaking panoramas of the Faraglioni rock formations rising from the craggy peak of Mount Solano, the highest point on the island. (B,L,D)

Be on deck early in the morning as the ship cruises in view of the most famous of the World Heritage designated Aeolian Islands—Stromboli, the “Lighthouse of the Mediterranean”—home to a volcano that has been mildly active for the past 2,000 years.

Arrive in the charming, medieval town of Taormina, which commands one of the most impressive settings on the island and is the 2,400-year-old center of Sicilian culture and commerce. Look for imposing, snow-covered Mt. Etna, Europe’s highest volcano, and a World Heritage site, and enjoy stunning panoramic views of Calabria. Visit the remarkably preserved Greco-Roman Theater, built in the 3rd century B.C. and still in use today, perhaps located in one of the finest settings of any ancient Roman settlement on Earth. Admire the 14th-century Corvaia Palace, an ornate, Gothic-Catalan structure; the medieval baroque portal of the Cathedral of St. Nicola; and the Roman Odeon, known as the “small theater.” Stroll along Taormina’s famous Corso Umberto, the bustling shopping thoroughfare with a distinctive Mediterranean flair. (B,L,D)

Begin the day by discovering the beauty and grandeur of Syracuse, extolled from antiquity to the present. Tracing its origin to Greek colonists from Corinth who settled here in 734 B.C., Siracusa reached its zenith of wealth and power 350 years later under Dionysius the Elder, who fortified his city with 14-mile-long walls and made it a center of philosophy and the arts. Today, Syracuse is a World Heritage site and a virtual open-air museum of classical monuments. Walk through the historic quarter of Ortygia, the city’s maritime heart, and see the 6th-century B.C. Temple of Apollo, the finest example of Doric architecture in Western Europe. Visit the magnificent Greek Theater, where Aeschylus once spoke to ancient Siracusans; the Roman Amphitheater, where gladiators competed for the crowds; the Altar of Hieron II, the limestone cave known as Ear of Dionysius, and the impressive Archaeological Museum.

Enjoy walking the legendary small island of Ortygia, Syracuse’s maritime heart, where, in the remains of Piazza Pancali, the monumental 6th century B.C. Temple of Apollo stands as the most ancient Doric temple in Sicily. Inside the Baroque cathedral, built on and incorporating the ruins of a 5th century B.C. temple dedicated to the goddess Athena, admire the unique baptismal font, an ancient Greek marble krater dating from the 13th century. The landmark Piazza Archimede showcases the dazzling, Baroque-style Fountain of Diana, adorned with rearing horses, charging tritons and maternal sea nymphs. (B,L,D)

From Porto Empedocle, visit Agrigento’s legendary Valle dei Templi (Valley of the Temples), a World Heritage site where classical antiquity comes alive. Here, no fewer than eight Doric Greek shrines dating from the 5th century B.C. dot the landscape, including the Temple of Hera, with its graceful northern colonnade, and the Temple of Concordia, a beautifully preserved Greek monument. There are temples dedicated to Zeus and Heracles and the Sanctuary of the Chthonic Divinities, ancient Greek lords of Earth and the underworld. Visit the Archaeological Museum and admire the momentous collection of Greek, Etruscan, Phoenician, Carthaginian, and Roman artifacts. The ship departs Porto Empedocle this evening for Malta. (B,L,D)

Enjoy unforgettable views on deck this morning while we cruise past the scenic shores of Selmunett, the small island where St. Paul the Apostle was shipwrecked and into the picturesque bay of Valletta. Founded in 1566 by the French Grand Master of the Order of the Knights of St. John, the magnificent Fortress City of Valletta, a World Heritage site, is one of the world’s earliest planned cities. Today, this 2018 European Capital of Culture showcases incredible architecture from the 16th century onward, including splendid examples of high baroque, neoclassical, and modern styles.

See the iconic and lavishly decorated 16th-century St. John’s Co-Cathedral. Enjoy a walking tour through the colonnaded Lower Barrakka Gardens, offering stunning vistas of Valletta’s Grand Harbor, and the striking Grand Master’s Palace. A member of the de Piro family of Maltese nobility leads your private tour through the 430-year-old Casa Rocca Piccola, the family’s ancestral home and a showcase of historical Maltese aristocracy. Step back in time in the underground Lascaris War Rooms, where General Eisenhower directed the Invasion of Sicily in 1943.

This evening, join your traveling companions for the Captain’s farewell reception. (B,L,R,D)

Disembark this morning in Valletta and continue on the post-cruise option, or transfer to the airport for your flight back to the U.S. (B)