Voyage from Malta to Rome 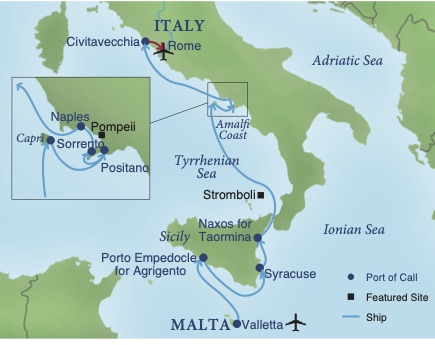 Ply the waters of the azure Mediterranean and experience the cultural legacy of southern Italy, Sicily, and Malta, often called the crossroad of civilizations. Here, layers of history—from the Phoenicians to the Greeks, Romans, and Normans—have left a magnificent mosaic of cultures. Join us on this fascinating voyage of discovery where each day showcases impressive World Heritage sites that will astonish you.

Arrive in Valletta, elegant capital of Malta, extolled as “one of the most concentrated historic areas in the world” for its remarkably well-preserved collection of palaces, cathedrals and bastions bequeathed by countless civilizations over nearly 3000 years. Embark the Five-Star Le Bougainville. (D)

Founded in 1566 by the Knights of St. John, the UNESCO World Heritage site of Valletta is one of the world’s earliest planned cities. Malta has held a strong connection to Italy and Sicily since A.D.  60, when a shipwrecked St. Paul brought Christianity to the tiny archipelago. Today, this 2018 European Capital of Culture showcases incredible high Baroque, neoclassical and modern architecture.

Visit St. John’s Co‑Cathedral, exemplifying Baroque architecture with two large bell towers looming over the cathedral. Tour the 16th‑century Barrakka Gardens and enjoy vistas of Valletta’s Grand Harbor. Visit the interiors of the Grandmaster’s Palace, the former residence of the Order of the Knights of St. John and the seat of Malta’s parliament until 2015. A member of the de Piro family of Maltese nobility leads your private tour through the 430-year‑old Casa Rocca Piccola, the family’s ancestral home and a display of Maltese aristocracy.

Attend the Captain’s Welcome Reception on board the ship this evening. (B,L,R,D)

The classical Greek world is reanimated in Agrigento’s UNESCO World Heritage‑designated Valle dei Templi (Valley of the Temples). Here, the landscape features eight Doric shrines dating from the fifth century B.C., including the Temple of Hera, with its graceful northern colonnade, and the Temple of Concordia, which remains almost entirely intact since its construction in 430 B.C.

See  temples honoring Zeus and Heracles and the Sanctuary of the Chthonic Deities—mythological lords of Earth and the underworld. Visit the Agrigento Archaeological Museum, which preserves Sicily’s finest collection of Greek, Etruscan, Phoenician, Carthaginian and Roman artifacts. (B,L,D)

Revered for its grandeur since classical antiquity, enchanting Syracuse reached its zenith of influence as an intellectual milieu under Dionysius the Elder 350 years after Greek colonists first settled here in 734 B.C.

Today, this UNESCO World Heritage site is an open‑air museum of well‑preserved classical monuments. Visit the storied Greek Theater, where Aeschylus once spoke to ancient Siracusans and still in use today; the Roman Amphitheater, where gladiators competed for the crowds; the Altar of Hieron II; the limestone Ear of Dionysius cave; and the Archaeological Museum.

Wander the hallowed small island of Ortygia, Syracuse’s maritime heart, where the most ancient
Doric temple in Sicily, the sixth‑century B.C. Temple of Apollo, stands in the remains of Piazza Pancali. The city’s Baroque cathedral incorporates the ruins of a fifth‑century B.C. temple dedicated to the goddess Athena, where you can admire the unique baptismal font, an ancient Greek marble krater (large vase) dating from the 13th century. The landmark Piazza Archimede showcases the dazzling, Baroque‑style Fountain of Diana, adorned with rearing horses, charging tritons and maternal sea nymphs. (B,L,D)

From charming Taormina, the medieval center of Sicilian culture and commerce, enjoy stunning panoramas of the Calabria coastline and snowcapped Mt. Etna, Europe’s highest volcano and a UNESCO World Heritage site. Tour the remarkably preserved third-century B.C. Greco‑Roman theater, the most dramatically sited Greek theater in the world and still in use today.

See the 14th‑century Gothic‑Catalan‑style Corvaia Palace and the Roman Odeon, a “small theater” built in 21 B.C., and see the medieval Baroque portal of the Cathedral of St. Nicola.

Be on deck to view the UNESCO World Heritage‑designated Aeolian Island of Stromboli, the “Lighthouse of the Mediterranean”—a volcano mildly active for over two millennia. (B,L,D)

Day 7 — Isle of Capri/Sorrento for Amalfi Coast and Positano

Enjoy a walking tour of captivating Capri, the island where, Homer’s Odysseus resisted the alluring call of the sirens. Visit the Augustus Gardens, a series of serene, flower-filled terraces that afford breathtaking panoramas of the Faraglioni rock formations rising from translucent waters and the craggy peak of Mt. Solaro, the highest point on the island.

Admire the natural splendor of the World Heritage‑designated Amalfi Coast, and experience the allure of the Mediterranean seaside with secluded villages, opulent villas and sun‑drenched beaches. Explore the winding, delightful streets of the cliffside, coastal village of Positano on your own. (B,L,D)

Dock in quaint Sorrento, an outpost of the ancient Roman Republic and the scenic gateway to Mt. Vesuvius and Pompeii. This seaside town of rose‑flushed buildings was built into picturesque cliffs high above the Tyrrhenian Sea and, as the world’s limoncello capital, is abundant with fragrant lemon and orange groves.

Continue to Pompeii, which was engulfed by the tephra of Mt. Vesuvius in A.D. 79, rendering the city frozen in time. Excavated 17 centuries after petrification, the incredible UNESCO World Heritage‑designated ruins intimately reveal Roman daily rituals during Emperor Titus’s reign. On the walking tour, see the wealthy Vetti family estate, the extraordinary amphitheater—the earliest surviving stone amphitheater of the Roman world—and the Temple of Jupiter.

Enjoy the Captain’s Farewell Reception on board the ship this evening. (B,L,R,D)

Disembark in Civitavecchia. Continue on the Eternal Rome Post‑Program Option or transfer to Rome for your return flight to the U.S. (B)