Delve into the compelling histories of African American culture in the Lowcountry of South Carolina and Georgia. Curated visits provide a deeper interpretation of family histories; the experiences and accomplishments of those who lived through and emerged from slavery to freedom; and insight into the Gullah Geechee cultural heritage.

Delve into the compelling histories of African American culture in the Lowcountry of South Carolina and Georgia. Curated visits provide a deeper interpretation of family histories; the experiences and accomplishments of those who lived through and emerged from slavery to freedom; and insight into the Gullah Geechee cultural heritage. 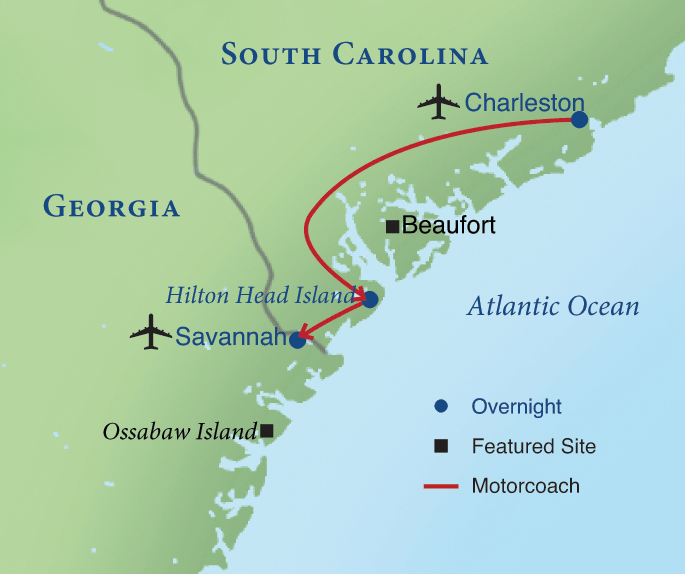 From iconic stately homes to moss covered oaks, South Carolina’s Lowcountry is among America’s must-visit destinations. But charm must reconcile with history—and the historical boom economies were built from the toil of enslaved people. Smithsonian Journeys invites you to delve into the compelling histories of African American culture in the Lowcountry. Curated visits provide deeper interpretation of family histories; the experiences and accomplishments of those who lived through and emerged from slavery to freedom; appreciation for the area’s unique natural history and wetlands; and insight into Gullah Geechee cultural heritage.

Arrive on individual flights into Charleston International Airport. Transfer independently to the Andrew Pinckney Inn, your boutique hotel in Charleston’s historic district. Gather this evening at the hotel for a welcome orientation and introductory lecture on African American development of the Lowcountry. Through the week, the themes of “The Colony of a Colony,” “The Gullah-Geechee Corridor” and “The Power of Place” will be explored in depth. Celebrate the beginning of your journey with a welcome dinner at a local restaurant highlighting Charleston seafood specialties. (D)

Your morning begins at Gadsden’s Wharf, a major destination for slave ships coming to South Carolina. An estimated 100,000 enslaved people from Africa and the Caribbean arrived in British North America between 1783 and 1808. On a guided walking tour, explore Charleston through the lens of its most celebrated ironworker, Philip Simmons. Stroll through the city and observe several of the more than 500 wrought iron gates, fences, and balconies fashioned by Mr. Simmons. His influence reached well beyond Charleston, as reflected by the exterior of the National Museum of African American History and Culture, which was inspired by his designs. Meet with a local historian for a private tour of Mother Emmanuel Church, the oldest AME institution/ church in the Southern United States, and site of the horrific 2015 shooting which took the lives of eight congregants and a senior pastor.

This afternoon visit McLeod Plantation Historic Site, a former plantation site now entirely devoted to understanding the experiences of historically enslaved people and their descendants by exposing and correcting the “Lost Cause” historical narrative. Importantly, this site is where dozens of formerly enslaved people acquired land beginning in 1865 and where the Freedman’s Bureau established a school and field office. Travel to Wadmalaw Island to learn about one of South Carolina’s early cash crops: indigo. At the Ibile Indigo House, meet with artist Arianne King Comer for an indigo workshop demonstration. Return to Charleston for an evening at leisure. (B, L)

Travel south to Beaufort this morning. En route, learn how the water that surrounds and defines the Lowcountry served as historical highways and coastal connections. Upon arrival, embark on a guided carriage tour beneath moss-covered live oak trees and past historic homes and churches. On a private tour of the Penn Center, explore one of the preeminent historical and cultural African American educational institutions. Located on the site of one of the country’s first schools for formerly enslaved persons, the Penn Center upholds William Penn’s history through education, community development, and social justice and highlights the significance of the Gullah Geechee culture and Reconstruction Era history in our country’s collective heritage. Transfer to Hilton Head in the late afternoon and check in to the Marriott Hilton Head Resort and Spa for an evening at leisure. (B, L)

Enjoy a morning at leisure before checking out of your hotel and departing for Historic Mitchelville Freedom Park. Mitchelville was the setting for the first self-governed town of formerly enslaved people and became a “rehearsal for Reconstruction.” Listen to a presentation that asks “How Do We Know What We Know?” and shares new research and information that is forming the basis of the site’s evidence-based interpretation.

Afterward, take a heritage tour of Hilton Head’s historic Gullah neighborhoods. The Lowcountry Gullah communities are known for their significant preservation of African and Caribbean linguistic and cultural heritage. Your neighborhood tour will highlight a number of local Gullah cultural traditions and how individuals and communities are working to preserve them and move them forward in the 21st century.

Transfer to Savannah and check in to The De Soto, in Savannah’s historic district. Enjoy a trolley tour through Savannah’s storied squares and parks before dinner at leisure. (B, L)

During a private guided tour of the Owens-Thomas House and Slave Quarters, learn about the historical African American urban experience as you view the juxtaposition of living quarters and relationships between enslaved persons, slaveowners, and free people of color on the grounds of this 1819 mansion in a historic neighborhood that highlights the parameters of slavery and freedom in Savannah.

Travel to the Pin Point Heritage Museum for a guided tour of an exhibition that tells the story of the history, traditions, and spiritual life of the Ossabaw Gullah Geechee community.

Take a pontoon boat to nearby Ossabaw Island, a Heritage Preserve and Georgia’s third largest barrier island. Focus on the rural experience as you hear a presentation about African Americans who inhabited the island for more than 200 years, and their connections to both urban Savannah and neighboring mainland communities. Gather this evening for a festive farewell dinner. (B, L, D)

Transfer independently to Savannah/Hilton Head International Airport for individual flights home or extend your stay to explore Savannah. (B)