Experience some of the rich highlights of Portugal, Spain, France, and England—four nations that have had a major impact on European and world history—during this unique cruise.

Experience some of the rich highlights of Portugal, Spain, France, and England—four nations that have had a major impact on European and world history—during this unique cruise.

I would highly recommend Smithsonian. They are a high quality tour organization. They organize the tour in a highly efficient manner. I would travel again with them. 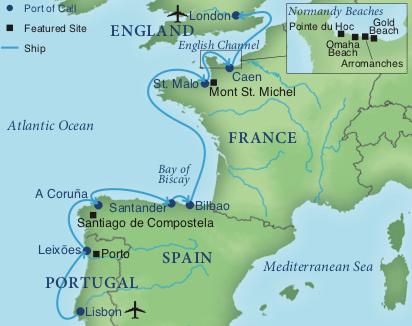 Lisbon’s charm exudes from its renovated palaces, magnificent churches, and an impressive castle that link the city to its rich cultural heritage. A historic gateway for world exploration and Portugal’s intimate, welcoming capital, Lisbon is the ideal prelude to your cruise. Visit the World Heritage sites of Jerónimos Monastery, a magnificent 16th-century monument, and the nearby sleepy village of Sintra, where the former Moorish fort is the last remaining medieval royal palace in Portugal. Accommodations are for three nights in the deluxe Dom Pedro Palace Hotel, located in the heart of the city.

Experience stately London, where living history makes each successive visit more enjoyable than the last. Visit the Tower of London and see magnificent Westminster Abbey, both World Heritage sites; then stroll through legendary Hyde Park and see Buckingham Palace, where history, tradition and modernity meet. Visit the Churchill Cabinet War Rooms, the secret bunker where the Prime Minister and his closest staff chartered the course to victory in World War II. Accommodations for two nights are in the sophisticated Athenaeum Hotel just steps away from Hyde Park.

Pre-cruise and post-cruise extensions are available at an additional cost. Details will be provided with your reservation confirmation.

I would highly recommend Smithsonian. They are a high quality tour organization. They organize the tour in a highly efficient manner. I would travel again with them.

Dock in Leixões and transfer to Oporto, a former Roman outpost and the center of the port wine trade since the 13th century. The city showcases great artistic and architectural treasures from the Moorish period, when Greek and Roman influences, along with tolerance between the Jewish and Christian faiths, created a coexistence of cultures in which disciplines like mathematics, medicine, optics, horticulture, art, and architecture flourished. Oporto’s historic city center, Ribeira, a World Heritage site, is a picturesque neighborhood of medieval streets lined with colorful houses.

Visit the Gothic Church of São Francisco and the neoclassical Stock Exchange, with its intricately gilded Arabian Hall inspired by the famous Moorish Alhambra palace. (B,L,D)

Travel into the oak- and pine-forested hills of Galicia, one of Spain’s self-governed principalities. Golden-hued granite buildings grace its well-preserved capital, Santiago de Compostela, a World Heritage site, where medieval pedestrian stone streets lead to the expansive Plaza del Obradoiro and the grand Romanesque cathedral. A pilgrimage site since the Middle Ages, the cathedral was built to enshrine the tomb of St. James and is recognized for its distinctive Baroque façade, original medieval portico and Churrigueresque altar. (B,L,D)

From Santander, transfer to Bilbao, surrounded by the verdant Basque Mountains. Stop in the historic old quarter and the promenade of El Arenal, a popular route for Bilbainos’ evening leisurely strolls. Enjoy a guided tour of the Frank Gehry-designed Guggenheim Museum, renowned for its collection of modern and contemporary art. (B,L,D)

While cruising the dramatic west coast of France, attend an exclusive onboard lecture by Dwight David Eisenhower II. (B,L,D)

The World Heritage site of Mont-St-Michel is one of the most awe-inspiring sights in all of France—its soaring spires rise majestically from a tidal plain seemingly suspended above the sea. A pilgrimage site since the early eighth century, this fortified village began as a humble oratory and grew into an influential Benedictine monastery, becoming a renowned medieval center of learning.

Experience the extraordinary beauty of its cloisters, refectory, stained-glass windows and the Abbaye du Mont-St-Michel, a three-story Gothic masterpiece. (B,L,D)

Dock in Caen and travel to the historic Normandy beaches. In the company of Dwight David Eisenhower II, walk where Allied forces landed on D-Day. Then, contemplate the solemn commemorative crosses and Stars of David in the American Military Cemetery at Colleville-sur-Mer overlooking Omaha Beach.

Following lunch, continue to Arromanches to see the remnants of Mulberry Harbor, constructed to support Allied landings on the Normandy beaches. View a wraparound short film documenting the D-Day campaign or choose to see the famous 230-foot-long Bayeux Tapestry, a visual chronicle of the Norman conquest of 1066. (B,L,D)

The ship cruises the Strait of Dover and then up the River Thames into the heart of London, a memorable passage possible only by small ship. Enjoy a cup of afternoon tea while passing the Thames Barrier; historic maritime Greenwich; and the soaring skyline of the Canary Wharf. Culminate your voyage in a dramatic approach to London’s iconic Tower Bridge.

Dock overnight on the River Thames across from the Tower of London. Attend the Captain’s farewell reception this evening. (B,L,R,D)

Following breakfast, this morning, disembark and continue on the London Post-Cruise Option or transfer to the airport for your flight home. (B)